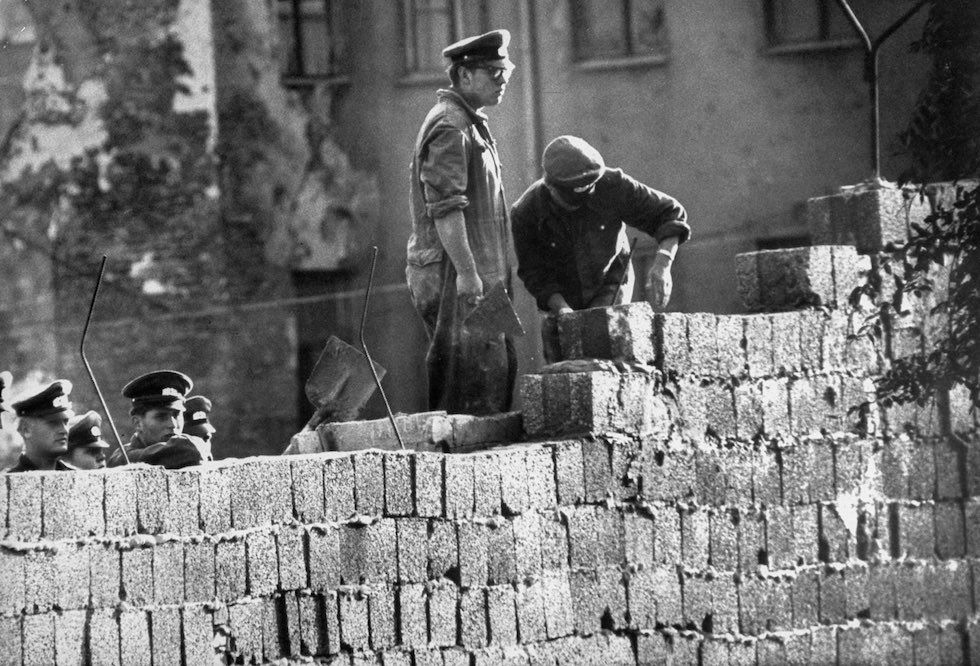 Of Walls, Separation, and Sovereignty

Berlin Wall (Berliner Mauer) was a tall concrete barrier built to divide the city of Berlin into the western sector and the eastern sector controlled by the Soviets. Construction of the wall began on August 13, 1961 by the German Democratic Republic (GDR) authorities in order to cut off by land all of West Berlin from East Germany. The communists called the wall the Anti-Fascist Protection Rampart (Antifaschistischer Schutzwall). The name was reminiscent of ANTIFA pretending to be fighting fascists while engaging in fascistic behavior.

Highly effective, the wall included weaponized guard towers. Wide areas called “death strips” had anti-vehicle trenches, beds of nails, and other devices that were supposedly installed to protect the innocent German population from fascist elements that were colluding to prevent the building of the socialist state called Deutsche Demokratische Republik (DDR), a state ruled by force, fear, and coercion.

The Berlin Wall was meant to keep people in, prisoners to the Stasi police and to the Soviet communists. Stasi, an abbreviation of the official name, Ministerium für Staatsicherheit (Ministry for State Security), was the secret police of the German Democratic Republic (East Germany) and one of the most hated and feared institutions of the communist government.

As the communists went underground to reorganize in order to emerge later in a more powerful form, the infamous Berlin Wall, a symbol of communist oppression, started coming down on November 9, 1989.

The Iron Curtain, a term coined following the end of WWII, during the dark period of communist oppression, was an actual barbed wire strip of land which separated the free European nations of the west from the communist-enslaved nations of the east, Poland, East Germany, Czechoslovakia, Hungary, USSR, Yugoslavia, Bulgaria, Albania, and Romania.

On the western side of the Berlin Wall was Checkpoint Charlie manned by three western nations. Many citizens of the communist –enslaved nations attempted to flee across this wall and a few actually made it while others died trying. In remembrance of the daring escapes of those who attempted the impossible and lived to talk about it, a museum was organized in Berlin.

Checkpoint Charlie Museum holds many interesting artifacts used by East Berliners and citizens from other communist countries in their attempt to escape to freedom, such as a car bullet-proofed with concrete and another retrofitted to hold passengers inside car seats. Another museum display holds a small home-made airplane.

The infamous sign, “Halt hier, Zonengrenze,” (stop here, border zone) is a reminder that border walls are effective to protect and preserve a country’s sovereignty despite the weak arguments coming from Democrats who refuse to fund the border wall that would protect our southern border from criminal invasion and drug cartels.

In 1984 a Prague university engineering student from communist Czechoslovakia, was one of those millions oppressed under communism who dreamed to escape to freedom. Ivo Zdarsky was studying aerospace engineering and knew how to build his own homemade airplane.

To an old hand glider, he attached three wheels and a seat, a two-stroke engine salvaged from a car, and a home-made propeller. He tested his plane one night in an eastward direction. Even though he flew low to avoid detection by radar, when he landed, he was arrested by the Czechoslovakian police that was waiting for him in the field. And, to make matters worse, his plane was confiscated.

At the station, Zdarsky explained that his aircraft was a school project and pointed out that no one trying to escape to the west would be crazy enough to fly east towards the Soviet Union. Sure enough, the police believed him, let him go, but they kept his home-made aircraft.

Zdarsky, unable to find more parts to build another plane and desperate for time, returned to the police station and offered them a cash bribe for his plane. As was often the case, officials were bribed all the time for the right price under communism. Allegedly, the police never thought a college student would pose any danger to the national security of a communist nation, so they agreed.

On August 4, 1984, at 3 a.m., Zdarsky flew his plane into the night and landed one hour later at Vienna’s International Airport. Curiously, nobody saw Zdarsky land his “flying lawnmower.” He parked his “3-wheeled craft with a basket-like seat outside an Austrian Airlines hangar used for DC-9 jets and sat there until airport employees spotted him.”

Ivo spoke fluent English and asked to emigrate to the United States or Australia. The 24-year old was granted political asylum after several hours of questioning. He was then taken to the Vienna refugee center in Traiskirchen near the airport.

Zdarsky eventually immigrated to the United States and formed his own company, building airplane propellers.