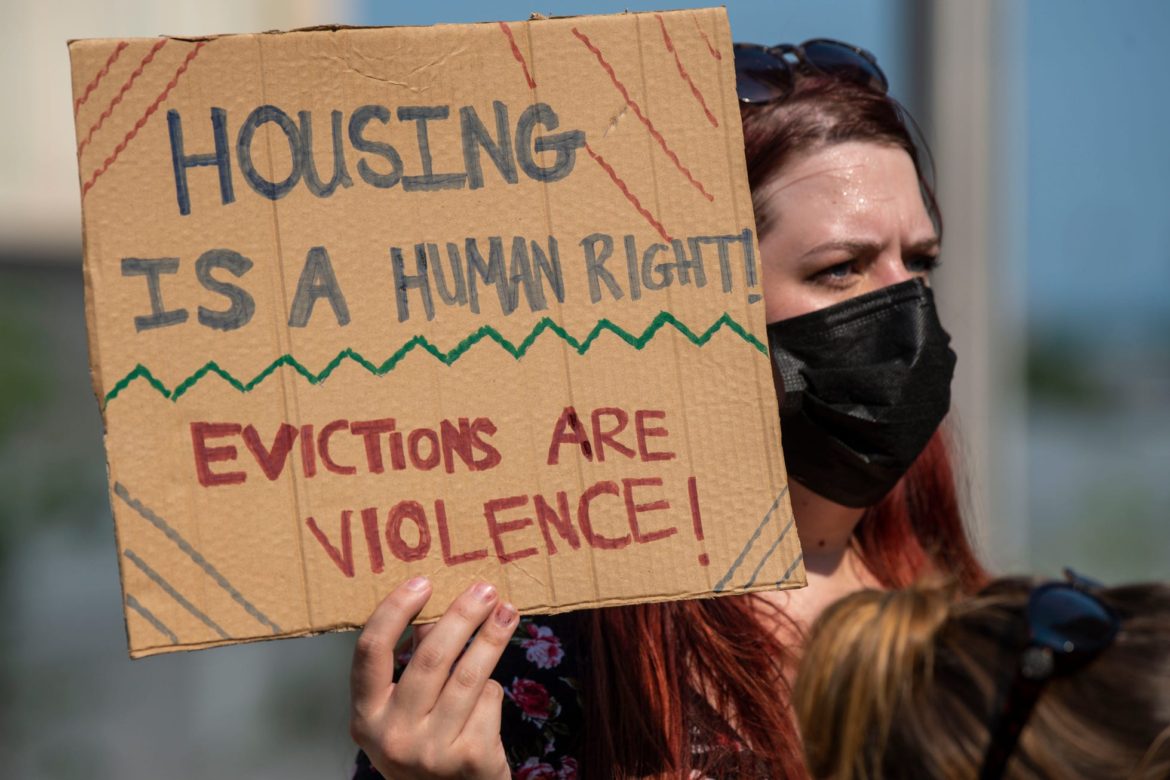 Judges in the Cincinnati area have rejected the Biden administration’s ban on evictions, deeming it illegal. The Cincinnati Enquirer reports:

A moratorium on evictions imposed by the Centers for Disease Control and Prevention has no binding authority in Hamilton County, the county’s municipal court said in a statement Thursday. The court’s judges voted on the issue, an official said. The statement cited a July 23 ruling by the 6th U.S. Circuit Court of Appeals that said the CDC exceeded its authority by imposing a 60-day moratorium.

On August 3, the Centers for Disease Control banned most evictions in 90% of the country, under the pretext of fighting COVID. It did so even though President Biden admitted the ban is probably illegal, because the “bulk of constitutional scholarship says that it’s not likely to pass constitutional muster.” In June, five Supreme Court justices indicated that it would be illegal for the CDC to renew an earlier ban on evictions.

Now is a bad time to block evictions. The economy is growing, help-wanted signs are everywhere, and vaccines protect against COVID-19. So tenants can find a job and pay their rent. Even if tenants get evicted for not paying their rent, they can still avoid COVID just by getting vaccinated.

Moreover, any restrictions on evictions should come from the states, which are responsible for landlord-tenant law, not the federal Centers for Disease Control. As a Supreme Court justice explained, banning evictions is beyond the CDC’s “existing statutory authority.”

Yet the Biden administration ignored the Supreme Court, and got the CDC to renew the ban in 90% of the country. The CDC first imposed a temporary ban on most evictions on September 4, 2020, when many people had difficulty paying their rent. Back then, unemployment was far higher than it is today, no vaccine existed, and daily deaths from COVID-19 were much higher. Some unemployed people were unable to obtain jobless benefits in 2020, due to breakdowns in state unemployment systems.

Given the big change in economic conditions, it would be wrong for the CDC to continue banning evictions, even if it ever had that authority (which it didn’t). Courts have ruled that a “significant change” in market conditions can require an agency to change its policy.

Banning evictions economically destroys some small landlords. The New York Post told the story of 88-year-old Harlem landlord David Howson, who suffers from Alzheimer’s disease and has a tenant who hasn’t paid rent since 2016. “We are completely destitute,” said Howson’s daughter.

Small landlords are going broke, while tenants who have well-paying jobs refuse to pay rent, according to Reason Magazine: “One problem with the eviction moratorium is that, in practice, it doesn’t only impact those in need. It is making widespread abuse possible, in which tenants with the means to pay their rent are taking advantage of the situation to live in their apartments at no cost.”

In theory, tenants need to claim hardship to qualify for the federal eviction ban, but no one seems to check whether hardship claims are true.

Some renters won’t pay rent, even when government assistance would enable them to do so. One landlord says, “We have a renter in one of our properties who just stopped paying recently and stopped returning phone calls, apparently changed her number. What’s really infuriating is that our state has a fund for rental assistance with millions still in it and she won’t apply.”

“A landlord says her tenants are terrorizing her. She can’t evict them,” reports the New York Times:

For more than a year, Vanie Mangal, a physician assistant…watched as patients gasped their final breaths…Mangal found no respite from stress when she went home. She is a landlord who rents the basement and first-floor apartments at her home in Queens…The first-floor tenants have not paid rent in 15 months, bang on the ceiling below her bed at all hours for no apparent reason and yell, curse and spit at her, Mangal said. A tenant in the basement apartment also stopped paying rent, keyed Mangal’s car and dumped packages meant for her by the garbage….Mangal — who has captured many of her tenants’ actions on surveillance video — has not only lost sleep from the tensions inside her two-story home but also $36,600 in rental income.

The longer the eviction ban lasts, the more unpaid rent will never be recovered. Many renters are judgment proof, so landlords won’t be able to collect back rent from them ever — even if they eventually get evicted after the eviction ban ends. Landlords still owe mortgage payments and property taxes, even when rent is unpaid. As Walter Olson notes in the Washington Post, “Small landlords across the country are being expropriated.”

The Biden administration claims it has the power to block evictions, even though they are governed by state landlord-tenant law, by using a public-health law never intended to restrict evictions. The Public Health Service Act of 1944 authorizes “regulations” that “are necessary to prevent the introduction, transmission, or spread of communicable diseases.” It says the CDC can “provide for such inspection, fumigation, disinfection, sanitation, pest extermination, destruction of animals or articles found to be so infected or contaminated as to be sources of dangerous infection to human beings, and other measures, as in [its] judgment may be necessary.”

The CDC argued that evictions can lead to homelessness among some evicted tenants, and to increases in congregate living, which can increase the spread of COVID.

But eviction restrictions are nothing like the other, more direct ways of preventing communicable diseases that the CDC is authorized to do by the statute, such as “inspection,” “fumigation,” and “disinfection.” They are thus beyond the CDC’s control, under the legal rule of construction known as ejusdem generis, as a federal appeals court explained in Tiger Lily v. HUD (2021).

That is true even if evictions do lead to more homelessness. Lots of things can cause homelessness, but that doesn’t mean the CDC can ban them all. If it could, the CDC could ban single-family zoning and other zoning restrictions (because they make housing less affordable and increase homelessness). Because of its limited authority, the CDC has never even tried to regulate acts that can spread COVID far more than evictions — like refusals to get vaccinated or wear a mask in crowded settings. Nor did it shut down crowded sports stadiums and nightclubs that spread COVID far more than evictions.

The federal government never tried to use the Public Health Service Act to restrict evictions in past pandemics, such as the deadly Asian flu epidemic of 1957-58, which caused the U.S. to experience a recession and made the stock market lose 15% of its value.

If the CDC had the authority to control the housing market, it would have unprecedented economic and political power. Interpreting the vague language of the Public Health Service Act to give it such power would violate a principle laid down by the Supreme Court, that Congress must “speak clearly if it wishes to assign to an agency decisions of vast ‘economic and political significance.’”

Giving the CDC that power would wrongly alter the federal-state balance by allowing federal bureaucrats to completely take over state landlord-tenant law. That’s contrary to a Supreme Court ruling that “unless Congress conveys its purpose clearly, it will not be deemed to have significantly changed the federal state balance.”

Small landlords, like small business owners, skew Republican. That is all you need to know. Every step Democrats take drains resources from their enemies and gives it to their friends. Nothing else matters. Not the economy, public health, or common sense. Freezing rent allows Democrats to freeload at the expense of Republicans. It is politically perfect for them. That’s why Democrats are doing this.

One other thing. large corporations are buying up housing and destroying the small landlord as a businessman. In the end, housing everywhere will have a big business tag and associated federal regulations/requirements associated therewith. Essentially, the retiree with a rental house for income support will be driven out of business.

A win-win for the globalists.

It is good to see it he Judge back his decision with complete reason and consideration for average working class folks actually putting forth an effort to be self sufficient.

Socialists don’t’ want Americans to be self-sufficient. Everyone is to be dependent on government. Thus history repeats itself.