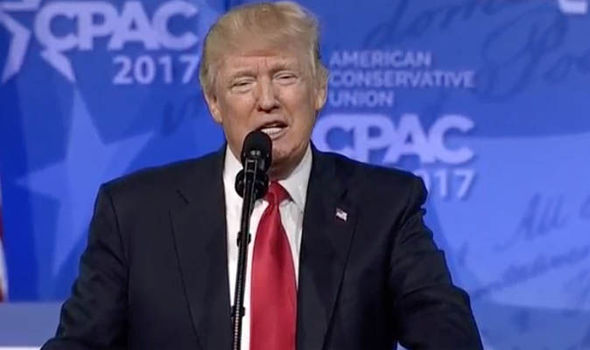 One month in, itâ€™s full steam ahead for Trump

President Donald Trump promised to get to work immediately upon taking office, and from his first executive orders it is evident that that is exactly what he has done. After a month in office, Trump has a confident report card to show the American people. In just a few weeks, Trump has tackled some of the most pressing issues to the American people.

On the campaign trail, Trump made immigration reform his priority and within a week of taking office provided executive action to Â implement extreme vetting for immigrants and refugees into the country from terror-prone regions and begin construction of a wall to prevent entry of illegal immigrants. These two-critical campaign promises highlight Trumps eagerness to secure our domestic space.

Even as the court system questions the legality of Trump temporary hold on refugees entering the country from unsecure nations, Trump has defended his positions as necessary for American safety, telling a group of conservatives at last weekâ€™s Conservative Political Action Conference that he â€œwill never ever apologize for protecting the safety and security of the American peopleâ€¦ If it means I get bad press, if it means people speak badly of me, itâ€™s ok, doesnâ€™t bother me. The security of our people is number one.â€

And he certainly has experienced that bad press, but that has not deterred President Trump from incentivizing local and state governments to follow federal law has always dictated. After Trump pledged to provide stricter immigration guidelines, states immediately backlashed against his presidency by claiming to become sanctuary cities. However, one of Trumps first executive orders declared a war on these exact cities, as he pushed for compliance and signed to remove federal funds from any â€œjurisdictions across the United States willfully violating Federal law in an attempt to shield aliens from removal from the United States.Â â€œ

President Trump did not stop at immigration, he has maintained the promise of his campaign to begin unraveling the disastrous economy that President Obama left the middle class wading through.

Trump signed a simply yet effective executive order in his first weeks of the presidency, the Regulatory Cap of 2017 states that â€œunless prohibited by law, whenever an executive department or agency (agency) publicly proposes for notice and comment or otherwise promulgates a new regulation, it shall identify at least two existing regulations to be repealed.â€

Trump has not only begun the process of removing President Obamaâ€™s harmful regulations, but set up a system to ensure future regulations do not add further burdens are businesses. This sentiment has been mirrored in Trumps most recent executive order.

The order released on Feb. 24, entitled the Presidential Executive Order on Enforcing the Regulatory Reform Agenda causes the head of each agency to designate a Regulatory Reform Officer who shall oversee â€œoffsetting the number and cost of new regulationsâ€, provide â€œregulatory planning and reviewâ€, and â€œthe termination, consistent with applicable law, of programs and activities that derive from or implement Executive Orders, guidance documents, policy memoranda, rule interpretations, and similar documents, or relevant portions thereof, that have been rescinded.â€

Trumps stance on rescinding and reforming the regulatory system radically changes the way regulation can be put in place. While Republicans have campaigned against government regulation for years, Trump has finally attacked it. For the next four to eight years, Trump will be dismantling the Obama-era government growth and hopefully providing a path for efficiency by producers hampered in the current regulatory environment.

Part of this message on American prosperity has focused on assisting Americans to get back to work and that is exactly what Trump has continued to do. As he makes government smaller through these regulatory rules, he has also put them back to work through his memorandums regarding critical pipelines and international trade deals.

Trump has expedited the construction of the Dakota Access Pipeline and the Keystone XL Pipeline, bringing the United States closer to energy independence and, pledging to use U.S. steel, putting Americans in that industry back to work.

Similarly, President Trump signed a memorandum directing the U.S. Trade Representative to withdraw the U.S. rom the Trans-Pacific Partnership. By placing the focus on bilateral trade negotiations, Trump in the proclamation promised to â€œ[r]epresent the American people and their financial well-being in all negotiations, particularly the American worker, and to create fair and economically beneficial trade deals that serve their interests.Â â€œ

Former President Barack Obama left Trump with a government that did not enforce immigration law, heavily regulated businesses, and failed to provide work in our stagnant economy. Now with Trump in office he is working diligently to follow through on his promise to make America great again, and with a lot more to do, the first month has set a remarkable pace for future policy.

One month in, itâ€™s full steam ahead for Trump was last modified: February 28th, 2017 by Guest Contributor Natalia Castro

He is coming like the glory of the morning on the wave
He is wisdom to the mighty. He is succor to the brave.
So the world shall be his footstool and the soul of time his slave
Our God is marching on.

The often missing verse of the Battle Hymn of the Republic.

Now if only the GOP leadership in Congress would do their part on taxes and aborting obamacare. The Senate still has a lot of cabinet and judicial appointments to confirm, too.

so sad. The guy gets all his advice from TV. His staff have gotten so much wrong despite claiming to be professionals. Trump makes up more crap than truth. And still, you fall over backwards to proclaim you love for the goldenboy