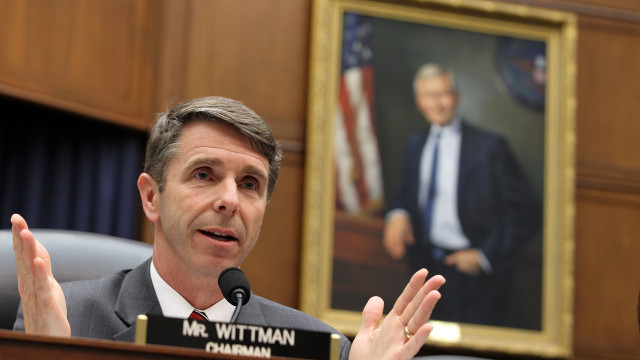 Only Congressmen Wittman and Garrett Vote Against CR

Edit: Sorry, meant to explain that this is the CR funding government through the Omnibus bill Republicans released last night that will be likely voted on next week. However, the Omnibus is a foregone conclusion.

Once again, Speaker Ryan who promised to use the appropriations process to fund the federal government, has gone back on his word. Only Congressman Rob Wittman (1st District) and Congressman Tom Garrett (5th District) voted against this ridiculous package. These Omnibus bills and Continuing Resolutions are our legislature’s way of simply kicking the cans of debt and deficits down the road. It is a refusal to take responsibility for governing. Here is the Republican Plan to fund the government through September that Republicans have introduced in the House.

Republicans blasted then Senator Harry Reid for refusing to allow budgets to make their way through Senate appropriations, but have proven to be no better.

As a resident of Virginia’s historic First District, I would like to personally thank Congressman Rob Wittman and the always principled freshman Congressman Tom Garrett, for their Nay Votes. It is important to realize that this was not a close vote. It was not as if other Republicans in the Commonwealth were against this, but were pressured into voting for it. They voted for it, because they did not want to take responsibility for governing our country. Congressman Wittman has been adamant, for the past three years, that Congress must do it’s job and take responsibility for funding our government through the appropriate appropriation committees.

The Republican Party appears not only unwilling to govern, but it also appears dishonest with it’s base. Continuing to increase our debt ceiling and continuing to run deficits is their way of passing on tax increases onto Millennials and Sentinels down the road. This is not only dishonest, but remarkably irresponsible. Considering the amount of college debt Millennials are already carrying, the very idea of future burdensome tax-increases on Millennials is a slap in their face.

Republicans need to stop obsessing about cutting spending everywhere but in their own districts. We all want someone else to sacrifice, but none of us are willing to sacrifice ourselves. Is it any wonder why nothing improves regardless which party is in power? We are not simply enslaved to the self-interest of our politicians and bureaucracies, but so too enslaved to the self-interest of our districts and our popular opinions. For example, repealing Obamacare was extremely popular, up until we got to the point where we could actually repeal it. Now repeal is polling at around 20 percent. Go figure.

It’s not just the Republican Party. It’s Republicans and Democrats and Independents. It’s everyone who thinks that a more responsible government ought to start with the other guy.

I’m tired of hearing, if we didn’t pass X, then the government would have to shut down. Well, duh! If you continually wait until the last minute to handle your business, your business will be in perpetual crisis.

The House of Representatives has one job and they refuse to do it.

(Congressman Dave Brat was at White House during vote, is expected to join Garrett & Wittman as Nay votes on the Omnibus).

Only Congressmen Wittman and Garrett Vote Against CR was last modified: May 1st, 2017 by Steven Brodie Tucker

Anything coming with Ted Cruz’s bill to use $ seized from “El Chapo” to build the wall.

I want an end to Continuing resolutions as much as anyone, and I applaud Wittman and Garrett. However, I’ve lived on this earth – and been involved in politics – long enough that I never expected a new budget to be negotiated by now. Republicans do NOT have the super-majority that Obama had when he first came into office. Republicans cannot pass a budget without some votes from democrats, no what. It would be nearly impossible to negotiate a budget (on top of everything else that needed to be done within the first 3 months without a super-majority. Unlike others, I am not disappointed because I never expected this budget to be any different. However, I will be right there with you if the GOP caves again in a few months when the next budget is negotiated. The one advantage the democrats have is that they always vote in lockstep with each other. If the GOP would do the same, we could pass the budget of our liking.

Will Congressman Garrett be out spoken about the funding needed to build the Border Wall?
Or will he remain silent about legal citizen businesses coming under ATTACK by illegal employers and illegal businesses in the 5th?

Defend us from;
rape,murder,drugs,child molesters,gangs and the illegal commerce that conceived this.
What was his oath of Office as State Senator, as Congressman , as enlisted Army?

God Bless you Tom Garrett for rejecting this wolf in sheeps clothing, Paul Ryan. Stay true to your principles, and take no prisoners. I am proud you are my congressman.

None of this is going to matter after 2018. The GOP is pissing off the base, so Ryan and the turtle can go back to minority status where they are comfortable.

A continuing resolution is a dereliction of duty. It allows the judiciary, the executive and the various bureaucracies to ignore the legislative branch.

The only thing I would disagree with you on SBT, is that Congressman Wittman has been adamant since the day he was first sworn in, not just for 3 years. He said no to the Bush 43′ bailouts about 9 years ago.

How many years have I been telling you how fortunate we are to have Congressman Wittman in the 1st District, SBT? But for years you chose to listen to the T Party lugheads. Better late than never.

I doubt that the good Congressman is going to sign on to any of the Trump fantasy BS.

First the first time in months, I fully agree with every word Steven Brodie Tucker has written. There is no way to look at this as anything other than capitulation to Democrats. All the Democrats have to do is threaten to shut down the government and Republicans fold every time. Republicans now say “wait until 2018 and then we’ll show you how we can govern”…. yea right. They’re cowards. Until they stand up to bullies, they’ll never get anything done.

However, I’m particularly proud of Tom Garrett. I remember talking to him personally and telling him how disappointed I have been in so many Republicans I supported in the past. In a meet and greet, I told Tom Garrett I would support his campaign, write checks, and personally work on his campaign, but I also said I’m going to be paying attention. He looked me in the eye and said we could count on him. Now I believe him.

More excellence from Steven Brodie Tucker. Thanks for contributing such thought-provoking, well-written observations. You are a credit to truly conservative thinking.

When are they going to defund Planned Parenthood? Is there any hope of that? Or will it go the way of the repeal of Obamacare and never happen?

They need to leave those in place to have something to campaign against.