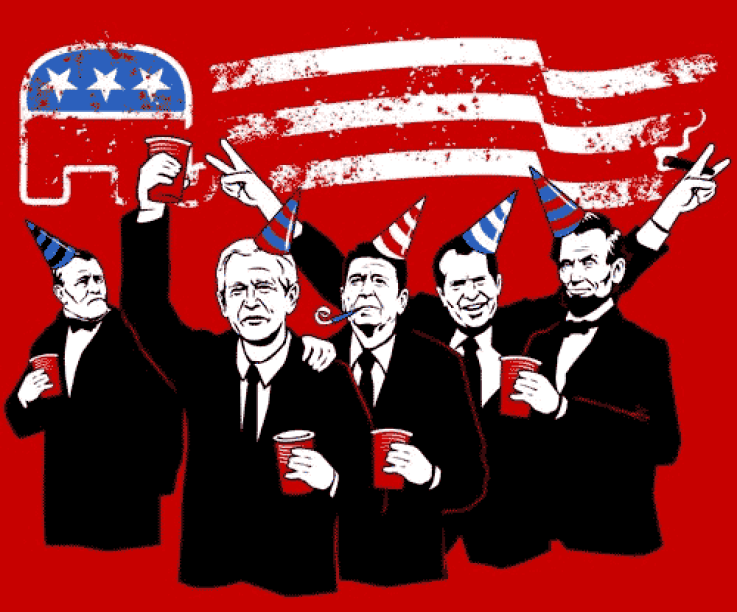 Seventeen courageous men and women ran for the Republican nomination for President. Each of our Republican candidates underwent scrutiny. Each of our Republican candidates took their licks. Even candidates who never polled over 1%, like Governor Gilmore and South Caroline Senator Lindsey Graham, took their share of criticism and personal attacks. Looking back on our collective behavior during the primary – it is clear that the majority of us are responsible for the disunity we have today. I know I carry some of that guilt and responsibility.

We no longer appear capable of disagreeing with one another respectfully. When we disagree, we cannot simply disagree with each other’s ideas. There always has to be some personal evil associated with the people with whom we disagree. Governor Rick Perry of Texas supported a great deal of Eminent Domain in Texas in his early years. It must because he hates freedom and he’s a sick statist looking to enslave the property of his people for the empowerment of The State. Ted Cruz supported shutting down the government to force the Presidents’ hand on Obamacare. It must because he’s a shameless self-promoter who is incapable of working with others. It couldn’t possibly be because he campaigned on the issue and promised to fight Obamacare to the bitter end. Jeb Bush said that illegal immigrants come to America “for love”. Therefore Governor Bush must hate law and order; and he’s secretly a globalist trying to important cheap immigrant slave labor for his rich Wall Street friends.

Maybe we shouldn’t be assuming we know their true motivations and assuming that we know beyond a shadow of a doubt that they are maleficent, and that all their supporters are nefarious and deserving of ridicule and mockery.

Maybe ridicule isn’t a valid form of political debate. Maybe we should have stuck to the issues, to the facts, to history and what history has taught us, and our reasons for projecting those lessons into the future. That would have served us better than the atmosphere suffocating us today.

Donald Trump, in all honesty, ran a campaign strategy predicated upon ridicule. He mocked his opponents until they dropped out of the race. Each of those Republican Candidates had a tight knit group of supporters who were intellectually, politically, and emotionally invested in their candidate. It is hard for them to forget how Donald Trump treated their favorite candidate so shamefully. It is hard for them to feel excited about Donald Trump or to support him enthusiastically, even if they are committed to voting for the nominee. Donald Trump’s supporters are of the opinion that these other candidates and their supporters “just need to get over it”.

When it comes to treating people with mockery and ridicule, it isn’t as easy as “just getting over it”.

In the case of Senator Ted Cruz, Donald Trump mocked his wife’s appearance, accused his father of being involved in the assassination of John F. Kennedy, and planted false stories about Ted Cruz having affairs with other women. These are hard things to “just get over”.

That doesn’t mean, however, that we cannot get over it and unite.

Sadly, the mockery and ridicule from Donald Trump and his supporters has not faded away as he secured the nomination. Strangely, Donald Trump and his supporters are less gracious in victory than they were in the heat of the battle. The mockery and ridicule has increased. I have been following this closely, as I have been tirelessly trying to persuade Ted Cruz’s Virginia supporters to vote for Donald Trump, regardless of our differences. I believe that the time to fight for our principles, our platform, and our political agendas is during the primary. After the primary is done, we vote for our Party. Voting for our party means voting for Donald Trump.

But Donald Trump won. He won and it’s over, the primary is behind us. Even those people involved in the #NeverTrump movement could be brought back into the fold, were it not for all the ridicule and mockery; and Donald Trump’s supporters would be much less prone to this outrageous behavior if it wasn’t for all the unnecessary attacks against The Donald from the bitter supporters of the sixteen vanquished Republican Candidates.

These will be my final words on the topic.

Only the Republican Voters themselves can unite the party by deciding to treat one another with respect, tolerance, and understanding. We do not have to agree. Disagreement is not a personal attack and should not warrant personal attacks in return. Millennials, Democrats, Independents, and Libertarians, as well as people who are relatively apolitical, are looking at the Republican Party today with incredulous amusement and disdain, as they marvel at our disunity, immaturity, and our inability to treat each other with the same dignity a five year old child would understand.

I am calling on all Republicans to end the personal attacks, the ridicule, and the mockery. I am calling on Donald Trump and his sixteen competitors to let go the past. If they don’t have something nice to say, it would be better to say nothing at all. If our children can understand these fundamental lessons of social decorum, I am confident that we can put them into practice as well.

If we come together, we’ll win. If we continue disparaging one another, we’ll lose. It’s as simple as that.