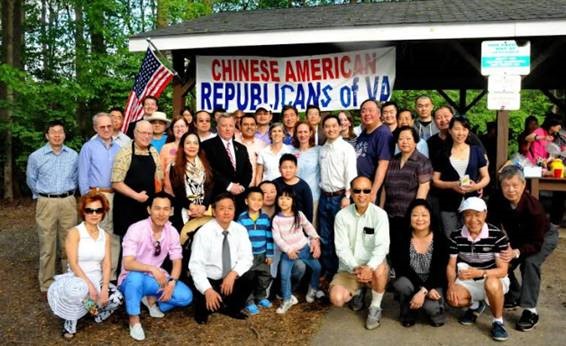 Op-Ed: A Fairfax County Model for Growing the Grassroots Activists

It goes without saying that energizing the grassroots is essential for the GOP to win. Â When I was asked by Chairman Matt Ames to serve as Vice Chair of Operations for the Fairfax County Republican Committee (â€œFCRCâ€) in 2014, we faced the task of reinvigorating and growing our existing volunteer base after disappointing losses in 2012 and 2013.

To do so, we needed to think outside the box. Â Luckily we had a District Chair in Hunter Mill, John Schwarzman, who owned a printing and advertising business. Over the past two years Chairman AmesÂ and I worked closely with John to develop various literature pieces designed to recruit new volunteers. Â These pieces focussed on â€œkitchen table conservatism.â€ Â By that I mean issues that have a real day-to-day impact on familyâ€™s lives such as Government encroachment on education, health care, property rights, and the future our children will inherit. The purpose was to strike up conversations with our neighbors and turn those conversations to actions.

We have developed various pieces such as volunteer FAQ door hangers with the Virginia Republican Creed on them, various literature pieces discussing the kitchen table conservatism mentioned earlier, and back to school night pieces that introduced our entire ticket in 2014 and 2015.

We have produced these pieces in various languages and have distributed them at events such as farmers markets, various local festivals, back to school nights, various local GOP conventions, and on election day. Â Each of these pieces had the FCRCâ€™s contact information, and in many instances, had a place for the District Chair or Precinct Captain to place a label with their contact information.

As we rolled out these pieces we began to see an uptick in new volunteers in places where the materials were used most. Â For example, Hunter Mill, a place where we historically struggled to find volunteers, began to have back to school nights and election day operations fully covered. Â We saw this in other districts as well.

After re-electing John Frey and electing Scott Cameron and Jennette Hough county-wide, we realized we had made great strides but still had room for growth. Â The day after the 2015 November election we sat down with representatives from the RNC and RPV to discuss how we could use our existing county organization to develop a stronger network of precinct captains, neighborhood team leaders, and block captains. Â We knew that, given the number of GOP candidates running for President in 2016, there would be a lot of energy among both the grassroots and thoseÂ not otherwise politically active–but who were hungry for real change.

I sat down with Matt and John and we developed an aggressive plan to start canvassing neighborhoods, covering various public events, and staffing polling places on primary day with the specific intent of inviting people to join the grassroots efforts. Â In developing a literature piece to do this, we realized our past pieces had exactly what we needed already. Â We tailored the content and made a two sided piece that caught the voterâ€™s attention about the importance of the election on the front, and had ways people could get involved printed on the back. Â Â Also printed on the back was the contact information of each district chair. 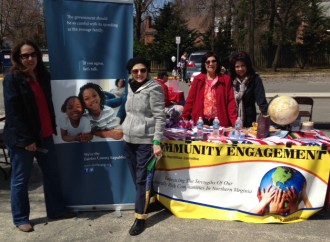 After testing it out in some districts, we decided to use the March 1st primary as an all-out push to recruit new volunteers. Â Our district chairs were able to organize over 500 volunteers county-wide to cover polling places in precincts where we needed the most help and could get the most Republican votes in the fall. Â When March 1st arrived, our literature pieces were well received by the record number of voters turning out for our presidential primary.

Within one week, we had over 1,100 people contact our District Chairs expressing interest to volunteer; that number keeps growing even as we speak. Â We have obtained the contact information from these new volunteers and have already started to introduce them to precinct captains. Â Each of them will be invited to our 2016 grassroots summit, similar to the one we had in 2014, to learn best practices in building a neighborhood team from fellow volunteers throughout the county. They will also be invited to smaller District and Precinct level trainings to get one-on-one mentoring.

It is important to note that the piece we used on the March 1st primary was not solely designed for that event. Â It was designed to be shared canvassing neighborhoods; handing out at festivals, gun shows, or grocery stores; and distributed at major GOP gatherings like conventions or fire house primaries. Â As you can see from the attached pieces, they are designed to start conversations with people at a variety of events and venues. 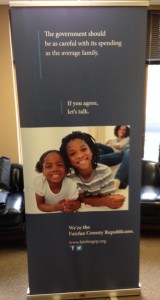 The purpose is to help people from various different backgrounds to see our shared values and concerns. Â From there we issue an invitation to that potential volunteer to help get involved.

Over the next few months we will train the volunteers who have recently signed up this past week. We will also continue our efforts to find and train even more new volunteers over the next several months.

Matt and I set out with the desire and goal to bring the party to the people. Â Our volunteers arenâ€™t paid and do everything out of deep patriotism and commitment to the conservative cause. Â We welcome these volunteers no matter whom they support (unless it is Hillary or Bernie) because we know the FCRC belongs to its members and volunteers. Â They truly do remarkable things and Matt, John and I are extremely thankful for their ingenuity, creativity, dedication, and resourcefulness.

All of these good things have happened because of our grassroots. We hope our story and the examples of literature pieces we have shared are something that can inspire all grassroots activists to grow the party.

I commend the process and thinking undertaken in this effort to bring the Republican message to ethnic grassroots communities by FCRC. I have commented on this issue earlier in a TBE op ed below so I don’t want to recover already plowed ground. I would only state one opinion regarding these efforts and that is literature customization and the attraction of volunteers from these neighborhoods is only the initial step in the integration of these communities into the Republican fold. I sense that this is understood as the article discusses the efforts to transition these initial primary and voting based event volunteers into smaller District and Precinct level exposure and participation via one-on-one mentoring.

To effect a fundamental change will require the incorporation of these new members into the internal processes of FCRC operations at the level of neighborhood team leaders, block captains, precinct captains and district chairs. This will be the only lasting method of building a “neighborhood team from fellow volunteers throughout the county”. The demographics of the county must come more into line with the demographics of the local Republican infrastructure (FCRC). When the demographic table provided by Chairman Ames in his earlier article cited below maps more closely to the demographics of FCRC’s organizational chart then the basis for significant change will be in place. Finally, I also commend the approach to welcome all “volunteers no matter whom they support (unless it is Hillary or Bernie) because we know that “FCRC belongs to its members and volunteers”. This might be a teaching lesson that both the RNC and some segments of the state party could learn from today.