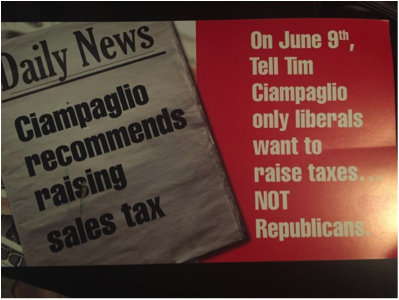 It’s not unusual for those with tax-and-spend records to run from them at re-nomination time – particularly when they are facing formidable challengers.[read_more]

But in the case of Bill Howell in the 28th House District and Mark Dudenhefer in the 2nd House District, the subterfuge intended to fool Republicans is simply breathtaking.

As you can imaging, neither Howell or Dudenhefer are touting their tax-and-spend records in their Primaries. Their votes for the landmark 2013 McDonnell Transportation Tax Hike aren’t even mentioned in any of their campaign materials. In fact, they are trying to present themselves as champions of smaller government, lower taxes and less spending !

The herculean contortions their campaigns are going through to weasel out of accountability with Republican primary voters and pretend they are the opposite of who they are is fascinating.

Howell’s lastest lit piece amazingly claims he is a “proven conservative”, who cut “$7B in spending” and “stopped 26 tax hikes” totaling “$30B”.

But as DJ McGuire shows in his detailed analysis, this is nothing but smoke and mirrors. Howell actually engineered three separate tax measures to increase taxes over $20B dollars, and more than doubled state spending in 10 years! 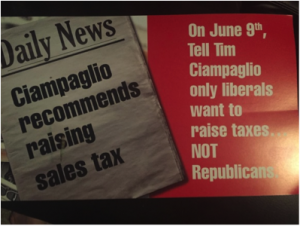 Whopper of the Year

But I give Mark Dudenhefer the “whopper of the year award” for this piece. Here Mark falsely accuses his opponent of wanting to increase the sales tax, when it was actually Mark himself who VOTED to raise the sales tax! Tim Ciampaglio, his opponent, has signed a No New Tax pledge, and actually proposed CUTTING 3 separate business taxes offset by the elimination of certain business sales tax exemptions.

But the Stimpson and Ciampaglio campaigns looked poised for victories in these Primaries.

And my money is that Republican voters won’t fall so easily for this “smoke and mirrors” desperate dodge.