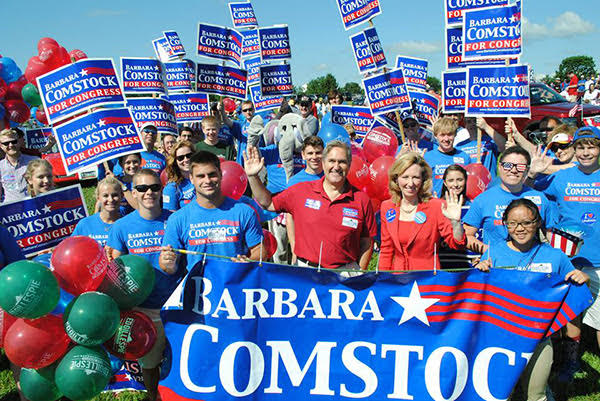 Our 10th District of Virginia has been represented in the United States House of Representatives by gifted Republicans since January 3, 1981. Through the work of first Frank Wolf and now Barbara Comstock over these years, we have been represented by leaders with proven integrity, commitment to those values and principles enshrined in our Virginia Republican Creed, and the ability to secure good legislation and stop bad legislation for the benefit of our region.
If you want to continue being represented by a Republican in the the United States House of Representatives, you need to vote for Barbara Comstock in our upcoming primary being held on Tuesday, June 12, 2018.
It really is that simple.
It will be no surprise to you to learn that our 10th District seat in the United States House of Representatives will be one of the Top 10 contested seats in the nation and Nancy Pelosi and her strategists know that their pathway toward regaining control of Congress requires them to win our district this coming November. They are also hoping that our Grand Old Party will fail to nominate its strongest Republican candidate in the 10th to facilitate their plans.
In a time such as this, we need to nominate our strongest candidate who is best positioned to win in November and that strongest candidate is Barbara Comstock.
Barbara Comstock is probably the hardest-working member of Congress in the nation. Her office excels in constituent service and you see her everywhere. She has been endorsed by the Pro life Susan B Anthony List, the NRA, the NFIB, and by many other groups who love liberty, respect the Constitution and the Rule of Law, and understand the importance of limited and frugal government.
For years, Barbara has been a leader in battling human trafficking and helping victims and cracking down on predators.  Barbara cosponsored landmark legislation that just got signed into law to crack down on the new crime of online sex trafficking. This legislation will protect sex trafficking victims who have been targeted by online predators who reach into our homes and target unsuspecting children on computers and social media.
Barbara worked hard to get a new Veterans Center in here Leesburg to better serve veterans at another site more convenient and she has a full-time veterans advocate in her office.  She also supported new laws which bring more accountability to the Department of Veterans Affairs by fixing the VA appeals process for benefits; as well as legislation that provides more funding for the Veterans Choice Program for veterans health benefits; and legislation that gives veterans GI Bill education benefits for their entire lifetime, the largest expansion of GI education benefits in over a decade.
Barbara authored and passed legislation cracking down on MS-13 gangs by deporting illegal alien gang members and barring foreign MS-13 gang members from entering the United States and has also passed legislation to give more money to the Northern Virginia anti-gang task force which is combatting MS-13 and other gangs.  This legislation passed on a bipartisan basis in the House and President Trump has already promised to sign the bill if the Senate moves it to his desk.
Barbara led the charge in battling sexual harassment in Congress. She passed landmark changes to policies in Congress to provide victims with legal support while also requiring better training and education for Zero Tolerance of sexual harassment in Congress.  The legislation also ended any payment of taxpayer dollars for harassment settlements and required members of Congress to pay any settlements themselves and make them public.
Barbara has worked with local sheriffs, schools, hospitals, churches, faith based groups and social services to address the growing epidemic of opioid and heroin addiction in our community which has been declared a national health emergency.  And Barbara Comstock worked to secure the largest investment to date to combat the opioid crisis. This includes robust funding for addiction treatment and prevention, as well as law enforcement programs that stop the spread of these dangerous drugs and help families and communities get the assistance they need.
Barbara supported the Jobs and Tax Cuts Act which provided a major tax cut for businesses to allow them to bring jobs back to the U.S. as well as help them compete around the world, increase U.S. wages and expand 401k’s and family leave programs. Her leadership and advocacy lead led to the doubling the child tax credit from $1,000 to $2,000 through that new law that also lowered tax rates so that 90% of hardworking taxpayers get a tax cut and maintained the tax credits for child care and adoption.
Barbara has made rebuilding our military and ending the national defense budget cuts a top priority, and she supported the budget plan to strengthen our defense and national security to keep our country safe.
I could go on and on, but suffice it to say that Congresswoman Comstock gets the job done.
Please join me in voting for Barbara Comstock in the June 12, 2018 Republican Primary or by voting by absentee ballot.