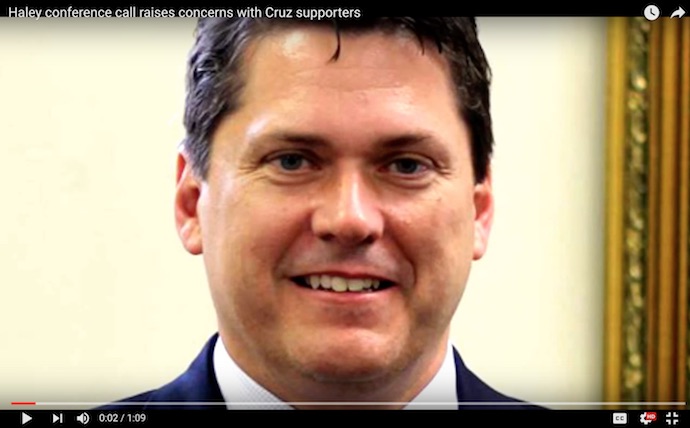 Op-Ed: Quest for Truth in the RPV Chairman Race

My name is Jordan Labiosa, I’m an elected town council member, Chairman of the Craig County GOP, Regional Vice Chairman of the Ninth Congressional District, and a Cruz delegate to the National Convention. It has been my pleasure to work in grassroots conservative politics for the past six years in our great Commonwealth.

Like many of you, I am also a delegate to the State Convention. Recently you may have shared in the misery of being bombarded by negative phone calls from Vince Haley’s campaign, making highly suspect claims about Chairman Whitbeck.

Now, I happen to personally know this is false because, as a Cruz delegate, the Chairman endorsed me while I was running for office. His endorsement was based on our shared conservative values and my Presidential candidate preference had nothing to do with it.

Naturally, I was infuriated by this call. Luckily for me, Vince Haley held a unit chair conference call Saturday night and I took the time to directly ask him why he was making such wild accusations. The results were enlightening, follow the link here

Me: What proof do we have that there is a conspiracy against Cruz and Trump delegates? You know Chairman Whitbeck denied it and told us to ask for proof. What proof do you have?

Aaron Gulbransen: Can you identify yourself

Me: I’m Jordan Labiosa, I was just elected as a Cruz delegate in Southwest Virginia and there was not action against me from Whitbeck. In fact, he endorsed me without prejudice to my candidate, but I do want to know what proof we have of these claims.

Vince Haley: So I’m not sure what claims you’re talking about. You’re saying claims have been made about a conspiracy?

Me: The emails that have been sent out multiple times that Cruz and Trump supporters should be at the convention on Friday to prevent their voting rights from being taken away by John Whitbeck.

Folks, it is very simple, either Vince Haley has no idea what is happening on his own campaign or he is knowingly spreading misinformation. I believe both of these are disqualifying. If you don’t have the leadership capabilities to run a tight ship then how can you make a credible claim that you can lead a state party organization? Dishonesty is a disqualifier that probably doesn’t need further explanation.

So which is it?

On the same call, I asked Vince and his campaign manager Aaron Gulbransen to condemn these falsehoods for the good of the Party if they are indeed being made without his knowledge. My question was met with silence. I hope we will not hear the same regarding this blog post.

The choice is clear in the race for Chairman. With John Whitbeck, our Party has a leader who has paid down debt, supported conservative candidates like Nancy Dye and Dick Black, helped our Party win races, and deploy field staff to regions like Southwest Virginia earlier than in any previous election cycle.

In contrast, we have Vince Haley who hasn’t attended any recent Republican events that I’m aware, didn’t vote in the 2014 Cantor v. Brat primary, and ran a campaign that did not make the ballot in Virginia (a task completed by Mike Huckabee’s 2008 shoestring campaign, Rudy Giuliani, and Fred Thompson), and led a 2012 campaign so far into debt that it still owes hundreds of thousands of dollars to this day.

The tactics mentioned above, his indecision on whether he is actually running or not, and his previous failures running campaigns, lead me to call for the withdrawal of his candidacy…again.

I hope you will show up on Friday and Saturday to end this embarrassment once and for all. Whitbeck for Chairman!

In an email sent by “Your Conservative Future”, a shadowy organization perpetrating the same misinformation regarding Whitbeck’s involvement, makes a claim that I am a “pro-parachute stealth delegate.”

I thought the lies about Whitbeck went far, but these lies and personal attacks are beyond what I could have imagined coming from Haley’s campaign.  I was, and John is endorsed by anti-parachute activist and Cruz supporter, Morton Blackwell.  Over the course of my campaign for National Delegate I made it perfectly clear:  I would oppose any change to the rules which would oppose Trump or Cruz.

I’m personally calling on Vince Haley to withdraw from the race.  These lies need to stop.

Jordan Labiosa is chairman of the Craig County Republican Committee and is a longtime conservative activist in Southwest Virginia and elsewhere around the Commonwealth.  He was recently elected as a delegate to the Republican National Convention from the 9th Congressional District on the Ted Cruz ticket.

Can anyone understand the lady on the call? I understood about every 5th word.

The calls I have gotten were from live people just reading from Haley’s ” Balls and strikes” email.

Ahh, but IS it false that Whitbeck may be planning on foisting parachute-choosing National At-large Delegates on us State Delegates this weekend? Here’s another of the latest emails on this subject – http://us13.campaign-archive2.com/?u=36e35050caacdf2c3210d75cf&id=ddd88f39ef&e=1b4f48471c

See, it all comes down to a MAJOR problem in transparency on RPV’s part; we NOT knowing what our betters e.g. RPV leadership have planned for us (rank and file) delegates this weekend. [Steve Alberston explains the Convention process well here – http://thebullelephant.com/everything-want-know-virginias-rnc-delegate-selection-process/) Apparently we are going to be presented by the Nominations Committee with a slate of 13 candidates, drawn from a list of candidates who we delegates know nothing about other than their names. [You can download the convention candidates named – but no contact info, or info on who they support for president here – http://www.virginia.gop/wp-content/uploads/State-Convention-Candidates.xlsx ]

The RPV would have us just take their (Nominations Committee) word for it they’ve chosen best for us. Transparency – it’s what’s lacking at the RPV.

Lee, this is how people in our party roll. As evidenced by the bathroom hysteria last week.

The choice for Chairman will be clear because there will be only one candidate on the ballot.

Ok George that made me laugh! Good one! LOL!

Lame blame game. Damn right, Haley’s going to be cautious denouncing anything on your say-so. Your phone call was an obvious set-up – on the par with a “When did you stop beating your wife?” kind of gotcha! You’re unhappy Haley did not fall your red herring.

Go to Vince Haley’s website here – http://www.vincehaley.com/ . You can read his motivation for resuming his race for the Chairman race. — (reprinted below):

“When I suspended my campaign in February, I had hoped that the Republican Party of Virginia would take steps to become an organization that was laser focused on victory in November and the fair management of party races across the Commonwealth. This hope was misplaced, which is why I am reactivating my campaign for Chairman.

We have an umpire problem at RPV.

This is not the fair calling of balls and strikes by a neutral umpire.

This is picking a side. It’s an abuse of trust.

Who would want to get involved in a local party race if all the time and hard work of grassroots candidates can simply be neutralized by shadow money allocated by the RPV Chairman and his Executive Director?

If this is business as usual for those running a state party organization that we the party faithful are supposed to accept – then count me out. I oppose such a practice, I pledge to never engage in such behavior if elected Chairman, and I hope to rally a majority of those attending the state party convention to join me in doing so.

How can RPV be laser focused on victory in November if it is so busy trying to enforce loyalty to RPV leadership?

The RPV should not try to control the direction of local parties. RPV should instead let the will of the grassroots play out in their local jurisdictions.

In order to be prepared for victory in November, we must have a Party that is competent and totally dedicated to fighting for the Republican Creed. We are in desperate need for an autonomous state party — an honest broker above any suspicion that it is tipping the scales for or against certain candidates in party races.” — (end of reprint)

Now, why don’t you address the issues Vince Haley brought up: the FACTS of Interim Chairman John Whitbeck – through his own PAC – purchased $122 delegates for the upcoming 7th District Committee Convention, at the Henrico County Republican Mass Meeting last month? How Interim Chairman Whitbeck, thinks it’s perfectly fine for him to meddle in lower-level party races – and pick winners and losers. So much for a party chairman being fair and impartial, huh.

Whitbeck’s actions there were the opposite of good leadership: they were the actions of a tyrant – choosing winners and losers at the expense of the grassroots!

Interestingly Whitbeck initially denied buying the delegates than claimed it was done without his knowledge. But it WAS done via his Va Victory Fund.

And even when Whitbeck was called out for interfering in local party elections, he hunkered down on the wrong. Whitbeck DOES believe he has the right to put his thumb on the scales and influence party elections. He’s wrong: he doesn’t. The members are the ones who choose – the grassroots choose – NOT the leadership/oligarch.

Vote for Vince Haley for RPV Chairman – for integrity, accountability, and transparency.

It was Vince Haley who asked Unit Chairs to join a conference call so he could talk with them and take questions. Jordan simply availed himself of the opportunity. It is quite telling that the paid Haley phone call used some of the same charges that Haley’s fake “Your Conservative Voice” group has been using.

Did Jordan tell everybody on the phone call he was recording the conversation? If NOT that’s a felony!

I invite Mr. Haley to contact the authorities to press charges against Mr. Labiosa for bringing the words spoken by a “candidate” for office during a campaign call to a wider audience. I am sure that will be just the thing to put him over the top in this race.

Connie’s fired up! I would hate to ever be on Connie’s bad side!

I thought that was standard behavior for GOP gatherings. RNC did it to Trump and leaked it, and they do it at “private” meetings. I believe VA law OK’s it if at least one of the participants knows it’s being recorded. You should assume every meeting is being recorded and will be distributed. Welcome to the future.

The website he took down when he dropped out? When it finally came up I only spotted the donate page. The Umpire letter that he keeps sending seems to be the only campaign. Simply tragic and embarrassing.

Put a fork in him, Haley’s done. It’s just like a Trump guy to claim everyone else is lying and corrupting the process while he lies through his teeth. Vince Haley, you’ve been caught with your hand in the cookie jar and you need to apologize to Whitbeck for you lies.

He’s a Trump guy? Clearly we are not vetting our supporters sufficiently.

I don’t know who Haley is for. He may be playing both sides of the fence here.

I just donated $0.06 to your shameless money grab attempt to attend the Cleveland national convention for this.