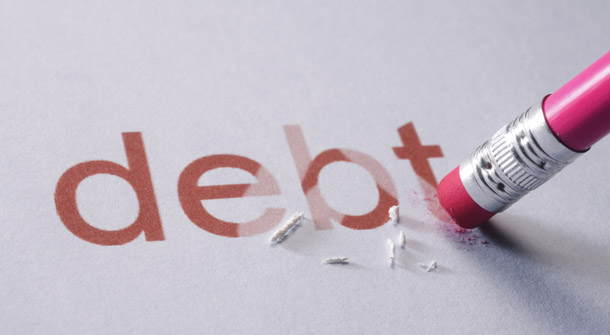 Op-Ed: RPV Ringing in the New Year Debt-Free and Improving in Fundraising

Happy New Year my fellow Republicans! It is going to be an incredible 2016 for our Party and one that we will never forget. While we are all supporting different candidates now, I know we will unite behind our eventual nominee because every single Republican knows how important it is to beat Hillary Clinton and to stop the Obama/Clinton/McAuliffe agenda dead in its tracks.

When I started as Chairman nearly a year ago, I had three goals to reach by the end of 2015. The first was to ensure that we lived up to all of our financial obligations on a monthly basis (which we did not in 2014 resulting in lawsuits). The second goal was that RPV contribute in a meaningful way to holding our General Assembly majorities and electing Republicans at the local level in 2015. With the help of our Finance Chairman Pete Snyder, our Finance Director Katie Courain and our donors, we were able to do this in ways we never thought possible.

My friends, I am very pleased to say that as of the last week of December 2015 RPV is 100% debt free! Our CFO just wrote the final few checks to pay off all of RPV’s creditors and we begin the most important election year yet free of the burdens our debts have caused us. 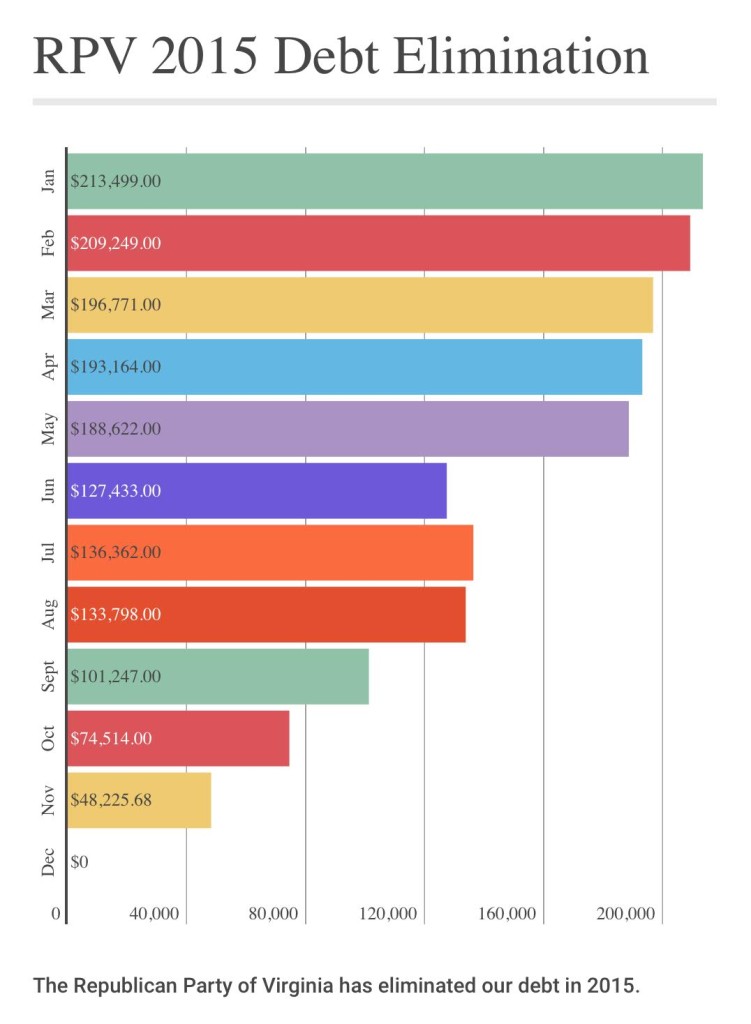 The fact that we are debt free finally is significant for many reasons.

For starters, this is the first time in nearly two years the RPV federal report will show no debt, which is important because we are going into a federal year with the presidential/congressional elections happening this year.

It is also significant to note that the payment of 100% of our debt took care of balances that had been there for more than year in some instances (telemarketing and mail) and other debts that led to lawsuits against us by creditors for unpaid invoices.

What’s even more significant is the retiring of our debt included the pay-off of the $100,000 credit line. The large debt shook our State Central Committee so much, we recently passed a Party Plan Amendment designed to stop unwise borrowing from occurring ever again. This debt has been hanging over us for far too long and paying it off is a significant morale boost for our Party!

But what’s most significant about this accomplishment is the fact that for the first time the RPV can actually fundraise without having this large debt looming in the background. Pete and I have had to take extra steps to assure donors that their funds were not just going to pay off old debts and were going to be used to win elections. Now we simply don’t have that problem anymore. For the first time in a while, 100% of the funds we raise can go to pay our regular expenses, the projects we are working on with data, grassroots and media and most of all, to winning Virginia in 2016.

Speaking of the Advance, the recent success of our 2015 Advance shows just how far we have come in a very short time. Without even having collected all the pledges yet, we have brought in $226,000 in gross revenue on the event with costs of around $80,000 when all is said and done. That’s a net gain for the Party of nearly $150,000.

Compare the above to recent Advances:

Our ability to bring the Advance to another level is indicative of what our Finance team has tried to do this year: rebuild the trust of our grassroots and our donors, put out a quality “product” that the grassroots, business community and other donors want to “invest” in and be creative in the ways we raise money.

What’s more is we were able to do the things we did in fundraising and paying off our debt with fiscally conservative management and UNITY! Our grassroots, elected officials, business leaders, advocacy groups and other donors all came together to help fund the Party in a very important election year. Now that we have shown our regular folks are there for us (as well as some new ones as well), we can begin to expand the donor base and bring in new investors to our Party. In 2016 this unity will make the difference to build a strong, funded and effective state Party when we need it most.

Thank you to everyone for their generosity and support for the RPV this past year.  We look forward to building upon these accomplishments and I am certain we can do better in 2016!

Op-Ed: RPV Ringing in the New Year Debt-Free and Improving in Fundraising was last modified: January 7th, 2016 by John Whitbeck

[…] begins the race with a good deal of support from all corners of the party, and is coming off a good year in terms of fundraising. He is unlikely to exhibit the same kind of complacency as Hager, so this campaign has the […]

This is very good. Even better: “The large debt shook our State Central Committee so much, we recently passed a Party Plan Amendment designed to stop unwise borrowing from occurring ever again.”
An ounce of prevention is worth a pound of cure.

Bravo. Important that we be seen as trustworthy and an organization that makes good on all its obligations. Now let’s stop trashing each other and win some elections.

Or, let’s agree to only trash Chairman Whitbeck so that these successes don’t go to his head. He has it so easy!

Thanks to you ,Pete, and your entire team at the RPV for taking on such a huge undertaking and turning it around

Excellent work! None of us agree on everything, but all of us agree on a whole lot. It’s vital to remember that we are always stronger when we work together.

I’ll be interested to hear how some are going poo poo this.

Don’t worry it’s coming, I can almost hear the key taps echoing down Route 7 to me here on the Shenandoah River from Centreville. Regardless, I congratulate the efforts of all those involved in the debt settlement achievement.

If our GOP can approve a $1.1 Trillion Omnibus debt raising as a good thing, why should the RPV be crowing about paying off debt?

$250,000 is a nothing, that’s just the cost to the taxpayers for the 10th district party primary.

As Trump would say, this is “HUUUGE!!!”. Seriously, this is fantastic news – Congratulations RPV!