Has Open Carry Brought on the Wild West in Mississippi and Elsewhere?

Having been at this gun rights thing for awhile, I have seen and heard the cries of the coming ” Wild West” in those States that have expanded the rights of gun owners. In the late 80’s and early 90’s when Florida was on the leading edge ofÂ the Shall Issue Concealed Carry movement, it was Florida that was going to become the next “Wild West”. It never happened, Shall Issue was introduced, crime declined as citizens were empowered and the ” Wild West” quietly left town. In the mid 90’s it was Virgina’s turn. We implemented a Shall Issue law and the critics proclaimed the Commonwealth to be the next Dodge City with gun fights breaking out everywhere. When we expanded gun rights into those establishments that served alcohol every restaurant and pub in the state was going to be the Saloon in Dodge City. It never happened, Shall Issue and the expansion of gun rights again provided for a downturn in crime and a safer Virginia. This scene was repeated throughout the country, be it the expansion of concealed carry rights, or the implementation of open carry laws. The “Wild West” has failed to establish itself anywhere that the anti-gunners predicted it would flourish. So now, it is Mississippi’s turn to be that place where the ” Wild West” is rejected yet again. It seems the only place the ” Wild West” is welcome is in the cities of Chicago, Baltimore or Detroit. All that is required for the “Wild West” to actually find a home is Draconian Gun Control laws. Â 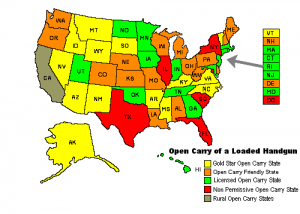 Has Open Carry Brought on the Wild West in Mississippi and Elsewhere? was last modified: August 20th, 2014 by Greg Stone