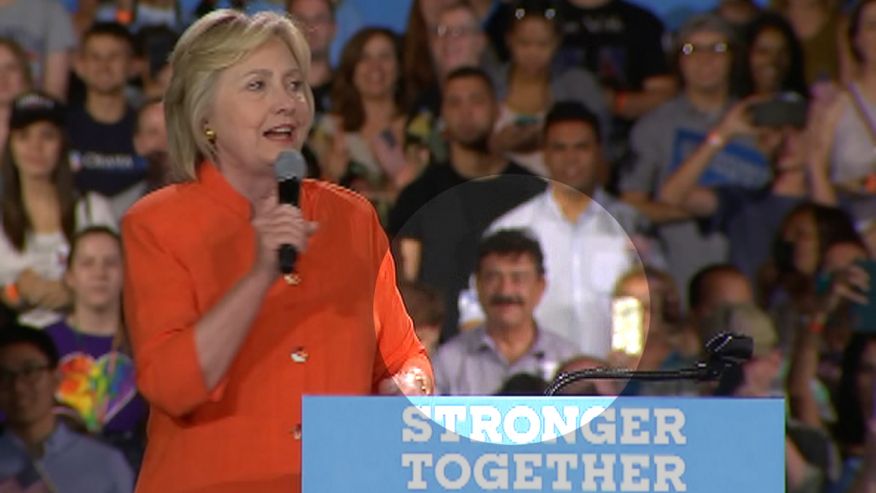 In a speech  delivered by Hillary Clinton today in Kissimmee Florida, just north of Orlando, she condemned the horrific shootings in the Orlando nightclub committed by Omar Mateen.  Just a few feet behind her set Omar’s father, Seddique Mateen. Clinton said

“I know how many people, family members, loved ones, friends are still grieving,” Clinton said Monday. “We will be with you as you rebuild your lives … because we can’t ever let that kind of hatred and violence break the spirit, break the soul of any place in America.”

Seddique Mateen held up a large sign for Hillary that said  “good for national security” and “gun control laws.” Oh my.  Mateen claimed he had been invited to the rally but it may have been by a mass email, he wasn’t sure. His story changed a couple of times. After the rally Mateen vehemently condemned homosexuality but said his son didn’t have the right to open fire in the nightclub. No kidding.

The Clinton campaign said they had no knowledge of Mateen’s presence, issuing this statement,

“The rally was a 3,000-person, open-door event for the public. This individual wasn’t invited as a guest and the campaign was unaware of his attendance until after the event.”

So is the Trump campaign and Republican pacs going to run ads showing Mr. Mateen in the front row and running his quote “vehemently condemned homosexuality”, or are they just going to let this opportunity slide?

This entire incident seems a bit bizarre.
What if 90% of the gay community votes republican in 3 months and the social conservatives stay home pouting. Want to try to figure that one out ??

If there’s STILL a person out there who thinks their “principles” direct them to support Hillary instead of Trump WHETHER BY voting directly for her, by voting 3rd party candidate, or neverTrumping, then there’s NO HOPE for you anymore. We have nothing further to discuss.You support a wicked person and a wicked platform to include abortion until leaving the hospital. You plan to vote to finance and assist radical Islamic terrorists who are out in full force to take down Trump. That’s the best endorsement ever for me and confirmation of where our votes should be placed.