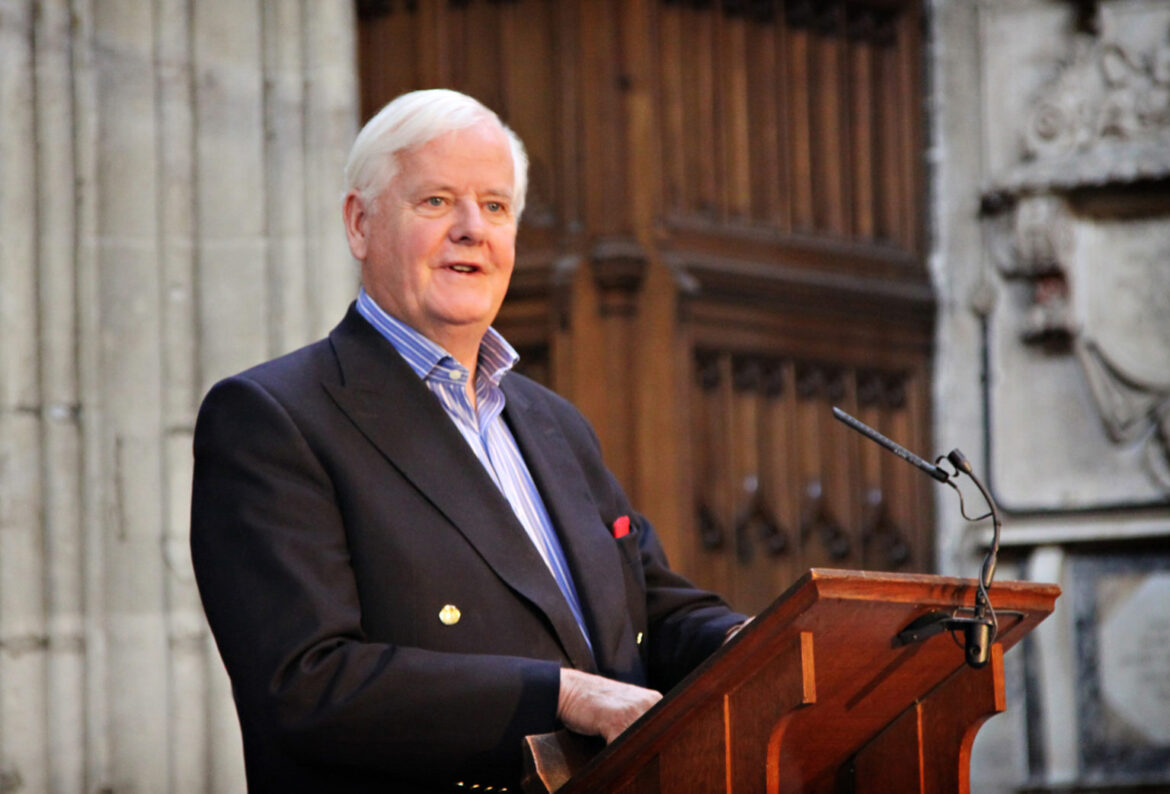 Os Guinness – The Christian Core of the West

[Reprinted with permission from the The Institute for Religion and Democracy’s blog, Juicy Ecumenism.]

“Secularism – a parasite on our best, and a protest against our worst.”

Both America and the West in general are in a crisis of identity and morality because the central inspiration of both, namely Christianity, no longer holds the confidence of the public at large. Christian renewal is essential for the continued life of Western civilization, otherwise, it faces demise.

This was the message of author, speaker, and social critic Os Guinness at a Faith and Law forum on September 16.

In the sense of science, technology, and the urban/industrial and business culture associated with it, the modernity of Western civilization now dominates the world, including places that are markedly anti-liberal, such as China. But Western religion was the decisive factor in making the world today. Christianity has been dominant in the West since 380 A.D., when the Roman emperor Theodosius “declared the empire officially Christian” in the Edict of Thessalonica.

The “decline of the West” theme started in 19th century with Tolstoy and Dostoevsky, and was given full form in a treatise, “Decline of the West,” by Oswald Spengler. Queen Victoria’s Diamond Jubilee (in 1897) is often held to be the zenith of Western power. World War I then “spelled the end” of the old Western civilization of Christian monarchies and ended any claim of the West to “civilization” because of its “horrendous carnage.”

The Christian body politic was called “Christendom,” and it was “a massive embodiment of the Christian faith that happened to take place in the continent of Europe.” There were Greco-Roman roots to the West as well, in particular “philosophy, science … governance, and the whole place of law.” But Guinness said that “what made the West was the conversion of the barbarian peoples of Europe from the fifth to the tenth centuries.”

Christendom suffered two great divisions, first between the Catholic West and the Orthodox East in the Middle Ages, and the second the division of western Christendom between Protestants and Catholics at the beginning of the modern era. Christianity was then repudiated by the Enlightenment and the French Revolution. Today, he said, “the European Union hardly mentions the Christian faith in its own histories.” Christianity “is just one faith among faiths, and often a highly rejected faith, above all, among the intelligentsia.” Nevertheless, Western civilization is “essentially a child of the gospel and Christendom.”

The Threat of Secularism

The “leading rival” of Christianity is secularism. He described secularism as “a parasite on our best, and a protest against our worst.” But secularism involves “reason without revelation,” and “progress, without any hope of heaven.” Since there is no appeal to God or any kind of metaphysical reality, secularism has no basis, as is “increasingly becoming apparent today.”

Guinness identified three impulses behind secularism. First “we don’t want God.” God and the church “are blamed for the oppressions and the injustice.” He said this “was the central impulse of the French Revolution.” He cited Solzhenitsyn to say that the Left’s animosity to God was deeper than its politics or economics. A second impulse was “we don’t need God.” This, he said, tended to be the North European version of secularism. The third impulse is the belief that God can be replaced. He cited the discovery of DNA as one example of this hope. Atheist Yuval Noah Harari’s recent writings on the aspiration for earthly self-sufficiency are another example. He said that secularism has been the West’s “leading ideology” since the eighteenth century. Today, secularism “believes it can take over the leadership of the West.”

Guinness next turned to ideologies that propose to replace the West. He referred to these as “the red wave,” the rainbow wave,” and “the black wave.” The “red wave is undoubtedly the different forms of Marxism.” This ultimately comes from the French Revolution, and spread to other countries, first as “revolutionary nationalism.” Although it is less familiar to the public today than the other two, China’s rise to prominence in recent years makes it more important. Guinness noted that one of the important revolutionary nationalists was Carl Schmidt, who “is one of Xi Jinping’s favorite authors.” The second wave was “classical Marxism,” or “revolutionary socialism,” which certainly includes communism. The third wave, which has now come to flood tide in America, is neo-Marxism, or “cultural Marxism.” This originated with Antonio Gramsci, and “is absolutely deadly.” This variety now holds that “the Constitution is broken, and it needs to be replaced.” This, he said, is “a death blow to the republic itself.”

The “rainbow wave” is the “LGBTQ Revolution.” While this does have antecedents in the 1960s and the permissiveness that became widespread during that decade, the rainbow wave ultimately “comes from the same quarter in Paris … that the political revolution came from.” An architect of this sexual revolution, Wilhelm Reich, said “we’re out to subvert thousands of years of civilization, and we have two main enemies, one the family, two the church.”  Sex education for three-year-olds was advocated for the purpose of destroying the authority of the family and the church. Opposites (such as creator and creation, left and right, right and wrong, and, of course, male and female) are absolutes the sexual revolution attacks.

The “Black wave” is Islamic radicalism. Much of this wave “goes back to the 1930s.” Guinness saw the beginning of this as the alliance of the Grand Mufti of Jerusalem with Hitler, who indeed subsidized him. He believes much anti-Semitism on the Left “comes from the alliance of Nazism and Palestinianism.” To Islamic radicalism “Israel is only the little Satan.” It is “America and the West” that constitute the “great Satan.”

Guinness said that in addition to these three waves of alien ideology, “a fourth point” is “cultural climate change.”  Whereas Europe still retains some local “tradition” and “social cohesion,” this is not present to the same degree in America. Quoting Lord James Bryce at the beginning of the twentieth century, he said that in the absence of these bonds only religion is a social bond in America, and if this ever comes apart, there would be “the completest revolution of all.” The three features of this totalizing revolution are “philosophical cynicism” (no truth), “moral corruption” (no shared values), and “social collapse.” School shootings, he said, are typically the result of “a fatherless loner.”

Creativity in the Life and Decline of Civilizations

Guinness observed that historians of the western decline, such as Arnold Toynbee, find a “creative minority” to be “critical” to a civilization’s rise and fall. Guinness believes that “this fits what our Lord has called us to be,” which is “a creative minority in the world.”

Guinness sees “two great precedents in history” which served to form the way Christians engage the world. These are the fall of Jerusalem to the Babylonians in 586 B.C., and the fall of Rome (when it was sacked by the Visigoths) in A.D. 410. He urged that we consider events surrounding the fall of Jerusalem in the light of our own day (presumably Israel’s apostasy from the requirements of its covenant with God), and heed St. Augustine’s response to the fall of Rome, that we are “not members of the city of man,” but “members of the City of God.” He said that “the faith that we believe … is the key to the renewal of the West.”

The first question directed to Guinness concerned Critical Race Theory, which it was claimed is being used as a negative term to avoid reckoning with questions of justice pertaining to race relations. Guinness said that European Evangelicals have always been on the side of reform, and do not share the kind of guilt about slavery that many American Christians seem to feel. As far as American Evangelicalism is concerned, he believes “you forget [your role in] abolition, and you’re weighed down by the South.” He said that CRT errs in subordinating individuals to their categories in a power struggle. Truth does not matter, only power. The rhetoric of justice is used for power, with the end result being what the ancient Romans called “the peace of despotism.” The Hebrew prophets, on the other hand, appealed to truth, and called for repentance.

Another questioner asked about conflicts between revolutionary waves, in particular between support for the Palestinian cause (or more generally, Islamism), and the sexual revolution. Guinness said that there is considerable overlap between “race Marxism” and “sexual Marxism,” but indeed there is a serious conflict of interests between race and sexual Marxism on the one hand, and Islamism, which retains a much stricter (and traditional) sexual morality on the other.

Another question was directed to the part played by the loss of civic religion in the ongoing civilizational crisis, and wondered how King Charles III compares to his mother, Queen Elizabeth II in upholding civic religion. Guinness said that he is “not in favor of civic religion.” He called it “patriotism without the Lord … religion is dangerous when it becomes idolatrous.” However, he said the there is “no question” about the collapse of civic (or civil) religion.

He thus seemed to be saying that civil religion cannot survive without a lively real religious faith held by a substantial majority of private citizens. Guinness commented on the increasing irrelevance of the Episcopal Church in the United States, compared with its position in earlier generations at the pinnacle of American society. Still, he thought that the dismissal of “any defense of your country” as “Christian nationalism” (understood as a pejorative term) is “rubbish.”

A final question asked about the wisdom of the “Benedict Option” as a response to secularism. Guinness indicated that in his view of church history the “genius” of the Reformation was the “monking of all lay people.” This meant that God calls “everyone, everywhere, in all that they do” to live as his disciples. Christians must “engage” the world.

Sincere and lively discipleship seemed to be Guinness’ answer to secularism. The inability of a purely secular vision of the world to satisfy the heart, and the impossibility of any society to accommodate each person’s hopes and dreams may then lead to Christian renewal in society. For committed Christians, discipleship must mean an able exposition and defense of the gospel, lived out in obedience to Biblical morality and evident charity to the neighbor, whether friendly or hostile, to the glory of God.

Os Guinness – The Christian Core of the West was last modified: September 28th, 2022 by Rick Plasterer

Rick Plasterer is a staff writer for IRD concerned particularly with domestic religious liberty. He attended Eastern Mennonite College (now University) receiving a B.A. degree in history and sociology, and an M.S. in library science from Drexel University.