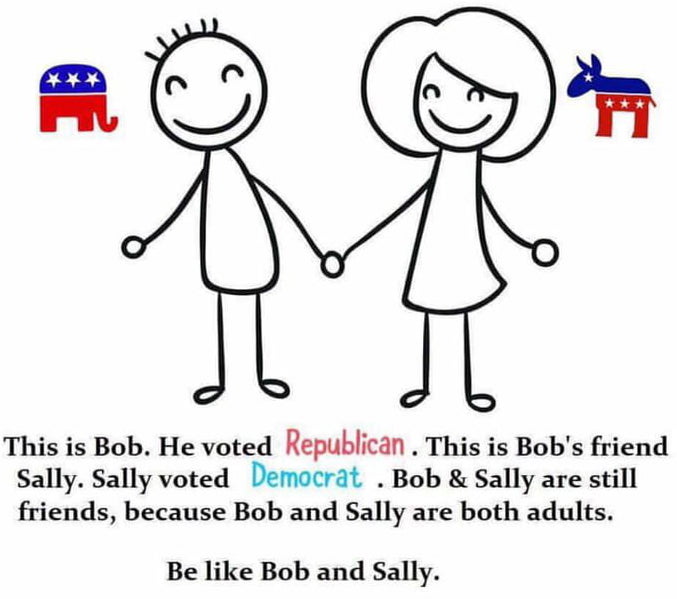 A meme we all should pay attention to -- but will this election only divide the nation more?

Our long national nightmare is soon over – or, is the nightmare about to begin?

I hope the nation will accept the results; to do otherwise just foments bitterness

At long last, this divisive election will be over Tuesday — although we may not know the actual final results for days — or weeks due to this massive early voting.

I am reminded of Gerald Ford’s words when Nixon resigned: “Our long national nightmare is over.”  However, the Red Blue divide is so great I wonder if the nightmare only begins Nov. 4.

I remember the bitterness and divisiveness of the 2000 Florida recount, which spawned the Blue Red divide in America. Democrats felt they were robbed; Republicans called Gore-Lieberman “Sore Loserman.” Thanksgiving with my liberal relatives that November was tense.

But the divide in this country has grown even greater, and I will acknowledge President Trump has exacerbated it, although George W. Bush and Barack Obama played roles in that, too.

For me, I feel I have done what I can to help the president and GOP ticket this year.  Not as many doors knocked as past years due to COVID, but 8,900 texts and phone calls, plus doing work for the Norfolk Republican Party and 3d District Committee of RPV.  But being a Day 1 Trump backer in 2015 and a defender of his administration (delegate to both conventions in ‘16 and ‘20), my long Trump support has cost me at least 3 friendships, and tons of “unfriends” on Facebook.

Even many of my Republican “never-Trumper” friends have Trump Derangement Syndrome and unfriended me or “snoozed me” during this campaign.  One old friend was screaming at me about Trump by phone the other day.  I was mortified.  He’s a Republican, too.

Being divorced after 25 years of marriage in 2019 and trying to date Jewish women has been extremely difficult due to my Trump support (some 75% of Jews are Democrats).  This and COVID has only aggravated the loneliness.

So, while I want the president to win, and if he does I may be tempted to rub salt in the wounds of some liberals due to their arrogance and certainty of views, I fear the divide will get worst because the national media have a vested interest in conflict to boost ratings and Web clicks and they (along with academia and special interest groups on right and left) want the divide to continue.

For me, who has served in elected office for 10 years,  I can tell you that some of the easiest people I worked with were Democrats and some hardest-asses were Republicans. But I always have respected the decision of the electorate — and I hope losers don’t cry out “suppression” or “vote fraud” or “The Russians hacked the election again” in order to give millions solace about why their candidate(s) lost.

In the long run, it’s better for the soul and the country to support the winner and give the new president a honeymoon, — which Trump didn’t get.  It is better to just leave politics out of the dinner table discussions and in the office.

Finally, I asked the chief rabbi of my synagogue if this election will be about God punishing one side or the other.  I asked: “Will the Right be punished with a Biden election, due to Trumps demeanor and personality, or will with the Left be punished with a Trump election due to the horrible misbehavior of millions of liberals for their arrogance and tacit support of rioting, looting and cop-killing (let alone the Dem Resistance in DC).  I suspect there will be the latter if Trump wins, and it won’t be conservatives carrying it out.

He and other rabbis pretty much agreed that we cannot question God’s will and that the best we can do is be thankful we live in a democracy where we even have the opportunity to vote — and a nation that helped bring democracy to most of the nations of the world. In other words, we will carry on. He’s right. Civil War, Depression two World Wars, Watergate, Vietnam, COVID and even the 2000 Florida recount won’t’ destroy America — nor will climate change or Russia and China. and we will survive as the most ethnically, racially and religiously diverse civilization in history. God bless and do vote today if you have not already.