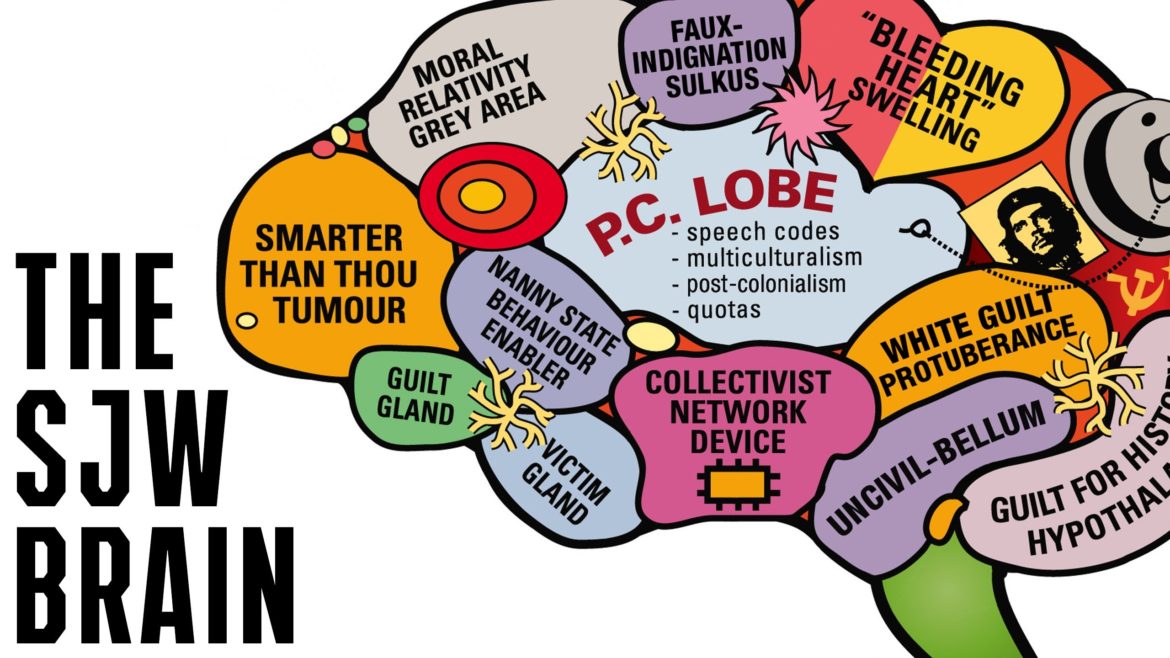 Dr. Robert Warren’s great article on this blog, Ignorance of the Social Justice Warrior,  struck home with me, as I have been quite concerned with the brazen in-your-face and often, violent protest tactics of the far Left, particularly “ANTIFA” and the anti-Trump “resistance” movement.

While Dr. Warren discusses the “ignorance” and “selfishness” of these people who start protesting at the drop of a dime, and do so at their peril by interrupting our daily activities (like on his recent flight or the Statue of Liberty shutdown on July 4 ).  However, the reality is these people, by and large young, are actually well trained at what they do – and often trained at the expense of taxpayers, student loans and exorbitant tuition fees of parents.

Colleges and universities are the major breeding ground for these “social justice warriors.”  In fact, there are majors in “social justice” at a number of universities, which offer field experience to work with radical Leftist groups.

The course description for Brown’s two-week “Leadership and Social Justice” class states:  “Students will engage in various hands-on workshops and simulations, such as … publicizing a campaign, engaging the press, catering to an audience, and choosing effective tactics. Through case studies on various movements such as pro-democracy, gender equity, labor rights and identity movements (LGBTQ, race, and immigration), students will learn strategies and skills for building and initiating a localized campaign.”

Note, there is no option for a student to join a conservative cause, like pro-life.

The description adds: “Students already engaged in a campaign, students who are or hope to become activists, and students invested in social change are encouraged to join us.”  The professor “spent six years as a community organizer and advocate for survivors of domestic violence and sexual assault.”

At the University of Pittsburgh, a taxpayer supported state school, an email [was] sent out by a Student Services Specialist with the university’s School of Social Work, who urged students and faculty to sign up for “A People’s Agenda for Change: National Day of Action” rally slated for downtown Pittsburgh on Nov. 29 2016, according to Pennlive.com

“People in every city in the country will be taking to the streets to raise the minimum wage, help workers organize, support undocumented workers, fight climate change and confront structural racism and sexism,” the email read. “Please join us and encourage your students to participate by offering them extra credit.”

According to a January 2012 blog post on the website EnlightenedWoman.org  , “Columbia University is offering a new course, “Occupy the Field: Global Finance, Inequity, Social Movement”. This doesn’t appear to be a course studying the movement or even better, comparing the dynamics with another protest movement such as the Tea Party Movement.  Instead, unfortunately, this appears to be credit for protesting.”

According to the course description, work is “divided between class work at Columbia’s Morningside Heights campus and fieldwork that will require students to become involved with the Occupy movement outside of the classroom.… The class will be taught by Dr. Hannah Appel, who is described as a “veteran of the Occupy movement.”

We can be certain Saul Alinsky’s “Rules for Radicals” is required reading in these classes.

The imbalance in our university liberal arts programs was documented in David Horowitz’ 2009 book “One Party Classroom.”    The subtitle is – “How Radical Professors at America’s Top Colleges Indoctrinate Students and Undermine Our Democracy.”

Leftist academic views on immigration/borders, Middle East policy, health care, spending, plus the tactic of shutting down debate by accusing opponents of being “racist, sexist or homophobic” have overtaken the Democratic Party and liberal parties in Europe.  It seems that every liberal policy has a “social justice warrior” academic behind it and their students there to protest for it. Conservatives rail against the media and “fake news” and Hollywood, but the real Fifth Column in Western civilization is Leftist academia.

Thankfully, there is some movement by the Trump administration and Congress.  Attorney General Jeff Sessions last spring announced the Justice Department would investigate and prosecute cases where free speech is being violated on campuses, which he reasserted in a speech to a high school summit last week.

In addition, there is a sweeping bill before Congress to rewrite and reauthorize the Higher Education Act of 1965,  which is where the federal funding for student loans and other aid flows to colleges and universities.  It is HR 4508, the PROSPER Act (Promoting Real Opportunity, Success, and Prosperity through Education Reform).

Under the bill, “No institution of higher education shall be eligible to receive funds under this Act … unless the institution certifies to the Secretary that the institution has annually disclosed to current and prospective students any policies held by the institutions related to protected speech on campus, including policies limiting where and when such speech may occur.”

The bill is still wending its way through Congress, and a number of universities oppose it, partly due to $15 billion in spending cuts.  So, if Republicans lose one or more of the two Houses this November, a number of these provisions might not survive.

But to my knowledge, the measure does nothing to require balance in various liberal arts courses, including  “social justice” majors, which are decidedly Left wing. Perhaps this is because the legal protections on “academic freedom” are very strong, but if the federal government used money as a stick to ensure better classroom balance, it would happen.

And, there is a good financial reason to do this. Student loan defaults now total $1.5 trillion, which “Forbes” magazine calls a “crisis.”

As a parent and taxpayer, I believe the administration and Congress could be missing a major opportunity to change the direction of academia in this nation and save our democracy (and student debt for worthless degrees) by instituting the proposals David Horowitz and other critics of academia have touted.

Hey Eric Numbnuts… In the Words of your heroine Maxine the Idiot Waters, when you see a Trump Official, form a crowd around them and “push back on them.”

At least the bull elephant is still a stalwart opponent of social justice, And reminds us daily.

You certainly are an ignorance expert.

Your ignorance may be cureable. I always believe it is unless it you keep going in the Eric the Troll mode. Over the last week, his posts have been utterly stupid, and stupid is not cureable.

We have to cut off the public funds that keep flowing to Leftist organizations. What to do:
1. Send your kids and your money to conservative universities.
2. Oppose education spending at every level: federal, state, and local. It is GROSSLY overfunded and, if they feel the squeeze, they might actually have to focus on core academics instead of looney-tooney junk.
3. Change bankruptcy laws so that student loans can be discharged. This will lessen the flow of money into the system.
4. Support educational choice. Break the government school monopoly. Independent private schools are much better than public schools. Move the money from public to private.

Love number 5 in particular. Break the public school monopoly and eliminate the DoEd

OR home school your children. They will get a better education…free from the anti American, socialist indoctrination provided by the public schools.

Correct, but I want you to get paid as well. None of this you can’t join a school team or tac relief.

“..:students will learn strategies and skills for building and initiating a localized campaign.“

Peaceable is missing, and that is what is in the first amendment to the Constitution. You want to protest? Fine. But do it peaceably or suffer the consequences.

There is nothing in those descriptions that suggest anything but peaceful organization. I understand why that scares the Trump GOP and the corporate overlords but deal with it.

Sure. Those constant attacks on anything Trump are peaceable until they aren’t.

Your side demands diversity, but not ideological diversity.

Actually, they demand allegiance to totalitarian ideas – or they will eliminate you as a “deplorable”.

Your side is full of racists. So there!

YOUR Side is filled with black racists, Latino Jew haters, and self-loathing whites. And the data supports ME, not you. All you can do is cry racism. That is your entire arsenal.

https://www.washingtonpost.com/news/volokh-conspiracy/wp/2014/02/19/entrenched-anti-semitic-views-very-rare-among-whites-and-asian-americans-common-among-blacks-and-latinos/?noredirect=on&utm_term=.ccb8e9a5f9d3 I love shaving data down your thrucking foat, Leftist.

I think you miss the point. There is no mention of students being allowed to join a conservative cause, like pro-life. And, if one did ask to do that, I wonder how they’d be graded? and when did colleges start doing “training” in organizing protests and the like? How is that material to a “well rounded education” and getting a job somewhere?

So you wish there to be a course about organizing against a woman’s right to choose? That’s your beef? Bet they have that course at Patrick Henry. Btw, the whole stated purpose of Patrick Henry as an institution is training students to organize and be activists (even run for office) for CONservative causes. Where’s your “wah, wah it’s so unfair” piece on that school? Are you saying their graduates are unemployable and did not get a well-rounded education?

Not even a good try. You apparently think organizing against life is a good idea. Thus, you advocate for euthanasia of the old and the handicapped as well as the unborn baby. You are on the side of evil.

The sociology departments of virtually every university house the grievance and victim students, aka, social justice warriors. You cannot find a conservative professor because such professors are not hired, not promoted, not tenured, and all too often treated like sewage by their professional peers if they are mistakenly hired. The university presidents and boards know the problem but they are cowed into silence or non-action because they fear being condemned and assaulted. (Nobody likes being called a racist and having their office, home and family subject to organized protests that amount to deliberately planned anarchy so they do nothing.)

Now these SJWs are no longer content to just generally protest. They are following the mad Maxine approach of harassing any opponent personally, and his or her family. There are no limits as the laws against intimidation and threat are not applied in many leftist cities or towns – see Portland and San Jose as the most egregious examples. Obama’s OFA is SJW central and he has something like 30,000 leftists available to undermine anything – for example, ICE.