OP/ED: Out of Control Medical Spending in Virginia, and the case against Medicaid Expansion

“Simple arithmetic shows that Medicaid Expansion will cost Virginia an additional $55 million in 2019 and $1.001 billion in 2020.”

Despite the most recent 5 year inflation rate of 7.4%, look how spending increased in Virginia:

Simple arithmetic shows that Medicaid Expansion will cost Virginia an additional $55 million in 2019 and $1.001 billion in 2020. 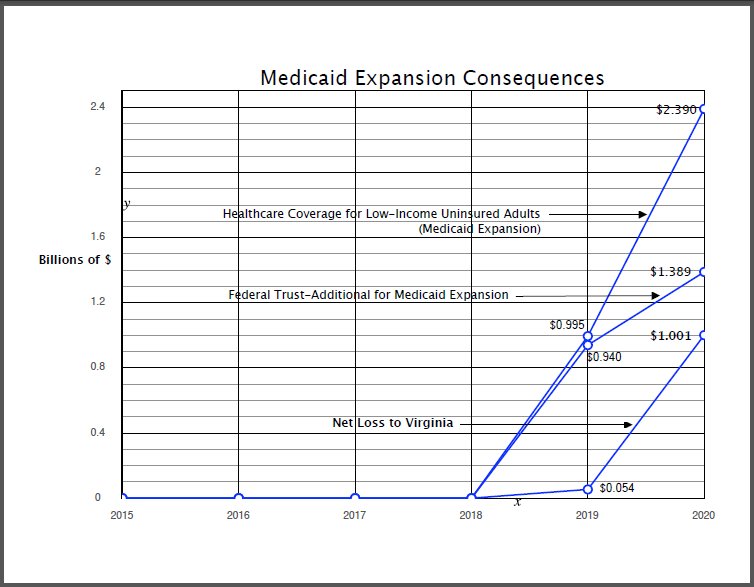 are shown in the graph “Trust minus Medicaid 6 yr.” 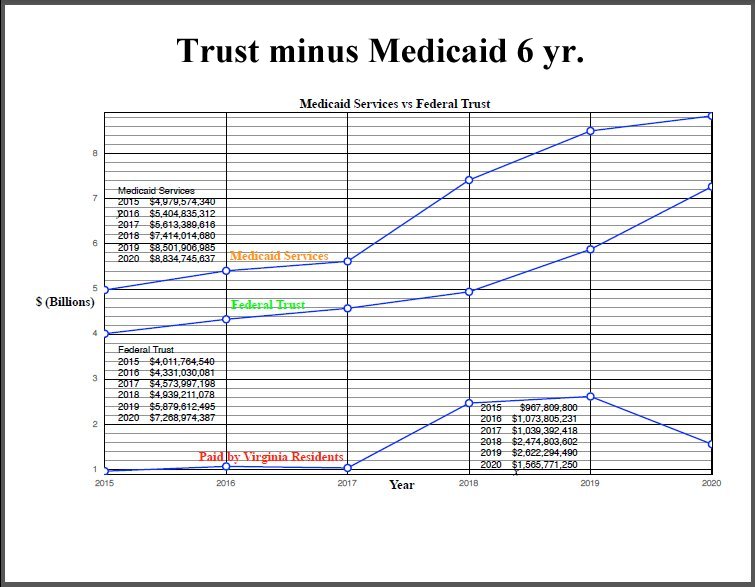 The average annual Medicaid cost to Virginia over the 3 year period 2015-2017 was $1.027 billion. The average annual cost to Virginia over the 3 year period 2018-2020 is $2.221 billion in the proposed HB29 and HB30. Thus, the Medicaid Expansion will increase Virginia’s annual Medicaid costs by $1.934 billion over the previous annual baseline. This liability will be borne by Virginia’s citizens through higher taxes, assessments, and/or health care costs.

For example, the cost of the work training is not reimbursed by the Federal government, and is part of the package pushed by the Medicaid expansionists. Also, there are other non-reimbursed costs, such as the costs to social services departments to find and qualify these individuals. The budget bills do not explain where this extra spending comes from.

OP/ED: Out of Control Medical Spending in Virginia, and the case against Medicaid Expansion was last modified: May 23rd, 2018 by TBE Staff

Start earning up to $7076 by working with Level 3 Communications
from comfort of home aww.su/6V7Sd.

Or more specifically to you.

Good thing my State Senator ran for LG with this very issue as her ‘red line in the sand.’

She actually said “not on my watch” about any Medicaid expansion!

Jill Vogel will NOT stab us in the back!

Vogel has already stabbed us in the back. Not only has she indicated she’d vote for it, Vogel is conspicuously silent regarding her position as the final vote nears. That’s called ‘fence sitting,’ aka hoping and waiting to see if there’s enough votes to pass it, then casting hers against it, which then makes no difference in its passage. Oh, right — Vogel stabbed us in the back on illegal immigration, or did you forget that? Remember her vote — or should we say her unexplained absence — which allowed illegal immigrants to receive instate tuition rates, courtesy of Virginia’s taxpayers.

She would never let it out of committee if there was the remotest of possibilities for it to pass!

Jill is a clever and nimble Senator but would not cross that Medicaid expansion redline that was the cornerstone of her entire campaign.

Why, that would be like campaigning for party registration and then voting against it.

I’m sure that Jill would not hide from a vote nor hide from her constituents.

The world has changed in Jill’s district, surely she doesn’t presume to think Nunc Pro Tunc.

At the time of this posting, Vogel remains uncommitted on Medicaid
expansion, but judging by her words from an e-mail, she seems more
troubled about how it might affect the state’s budget than how much it
would raise taxes:
“There
are a number of ways to get … this right, including good reform
measures to adopt. I can’t lay that out right now until I see something
specific … If there’s any risk at all that we lose federal funding …
we’re looking at several billion we’ve got to come up with.” http://www.america.easybranches.com/virginia/Vogel-undecided-on-budget-plan-with-expanded-Medicaid-863983

My Jill said: “She said the Affordable Care Act has negatively impacted patients and doctors alike and she defended Virginia’s decision not to expand Medicaid under the law, saying the cost would eventually explode the state budget. A government-run health care system, she said, would be a “disaster” and she criticized Fairfax’s support of single-payer insurance, saying it would be too expensive.”

What could possibly have changed?

She lost her bid for LG due to NOVA’s dense population of liberals. Vogel’s an ambitious gal, so don’t rule out that she’s honing her chances for round 2 by moving left-of-center. It took her two tries to make state Senator, so don’t rule her out for another run at the LT position, which puts her inline for a shot at the Governor’s manse. In my not-so humble opinion, that’s her goal, and if throwing Virginia to the wolves to get there, so be it. Sound far fetched? Look what she did to Bryce Reeves, which is eerily similar to what she did to Mark Tate to win the GOP Senate primary the second time.

It’s a done deal. The quicker you accept it the easier it will be.