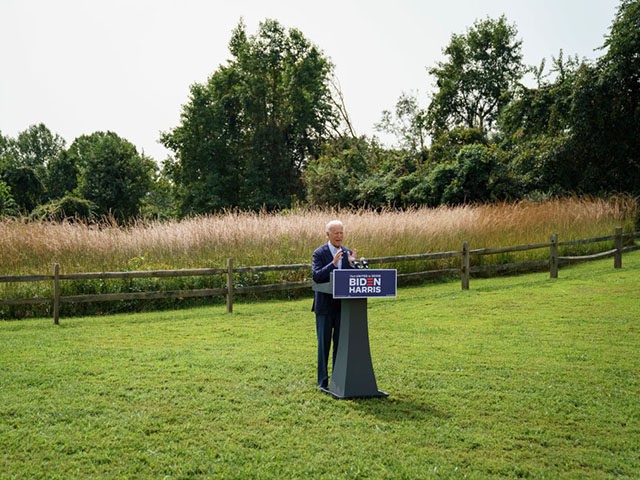 Finally, Joe Biden accomplishes something! And….he is outstanding in his field…that’s where we found him yesterday…standing in his field. Except the field wasn’t his, it belongs to the Delaware Museum of Natural History, about eight minutes drive from his basement.

The setting was a beautiful pastoral scene complete with a split-rail fence and either tall grass or not yet amber waves of grain in the background…topped with trees. The manicured lawn on which he stood added to the desired peaceful effect. The only distraction was the podium, poor old Joe…and the giant screen monitor straight ahead which blocked the view of the comatose crowd of a dozen attendees.

He stumbled through his absolute, maybe, tough, abstract psycho-philosophical presentation on the environment and climate change, in which he blamed President Trump for the California forest fires, the Gulf hurricanes and the tornadoes in Kansas that blew Dorothy to Oz…and Toto, too!

It was so uninteresting, that I became fascinated watching him squint trying to read his lines and particularly at those distinct times when the script must have told him to show anger. He switched from monotone to moderate upset and then got really angry and yelled at President Trump for some imagined malady towards the environment. He did this many times throughout the endless presentation which provided the only interesting aspects of his speech. As an actor…he needs work.

During the event he stated that “We need a president who respects science,” and then dramatically clutching both his hands into shaking fists, continued,  “…who understands that the damage from climate change is already here!” Once again, he worked himself up to a fever pitch and with clenched and shaking fists called President Trump “…an environmental arsonist!”

He indicated that unless we take urgent action, it will soon be more catastrophic than the conflagration of the two black holes and we cannot sustain another day with Trump! That is the only thing that I recall, for I was more interested in his delivery than anything he had to say.

The entire presentation had to be an embarrassment to the Democrat Party and especially to Bernie Sanders and his environment/climate control expert Alexandria Ocasio-Cortez (AOC) the US Representative from the 14th Congressional District of New York and former bartender from Brooklyn.

What Biden proposed is financially impossible to sustain and will be about as effective as Solyndra and that $140 million dollar boondoggle! However, I certainly can see it enriching any number of Biden-family members.

Biden while speaking in Florida with the same technique of squinting and obviously reading a script, said that “Trump is not fit to serve as President. He publicly supports our veterans, but privately insults them by calling them suckers and losers.” Which referred to a now debunked non-existent conversation which was probably fabricated by two Democrats hoping to distract from Biden’s sinking poll numbers, by bringing up a two-year old event.

Fortunately, there were more than twenty witnesses who had spent the entire day at this event with the President and said no such statement was ever made…nor would he say anything like that. Some of these witnesses were not Trump enthusiasts either; however, a lie is a lie, and the Democrats have always been adept at creating them…without shame.

Biden’s VP pick, Kamala Harris, in a recent interview referred to the “…Harris’ Administration together with Joe Biden.”Could this be another blunder or possibly a slip of the tongue about darker plans of things to come? Are they just using Joe Biden for his name recognition and hiding him in his basement until they can get him elected and then declaring him unfit to serve and sneak in Kamella’s nose under the tent? She has the most radical left-wing voting record in the US Senate, and “yes,” this includes Bernie Sanders. Just something to ponder.

Meanwhile, the fires which were started by a real arsonist burn out of control over millions of acres on the West coast, with the death toll over three dozen continuing to rise. Major Democrat-controlled cities are being destroyed across the nation by Antifa and Black Lives Matter (BLM), both Marxist groups which blocked hospital entrances cheering for wounded policemen to die, while their also-freakish and confused members blocked bridges halting traffic on the East coast…and Biden goes back to his basement after a hard day tending the fields…in need of a nap.

Clear thinking Americans, may I suggest that you vote Republican to stop all of this nonsense and save our country for future generations!