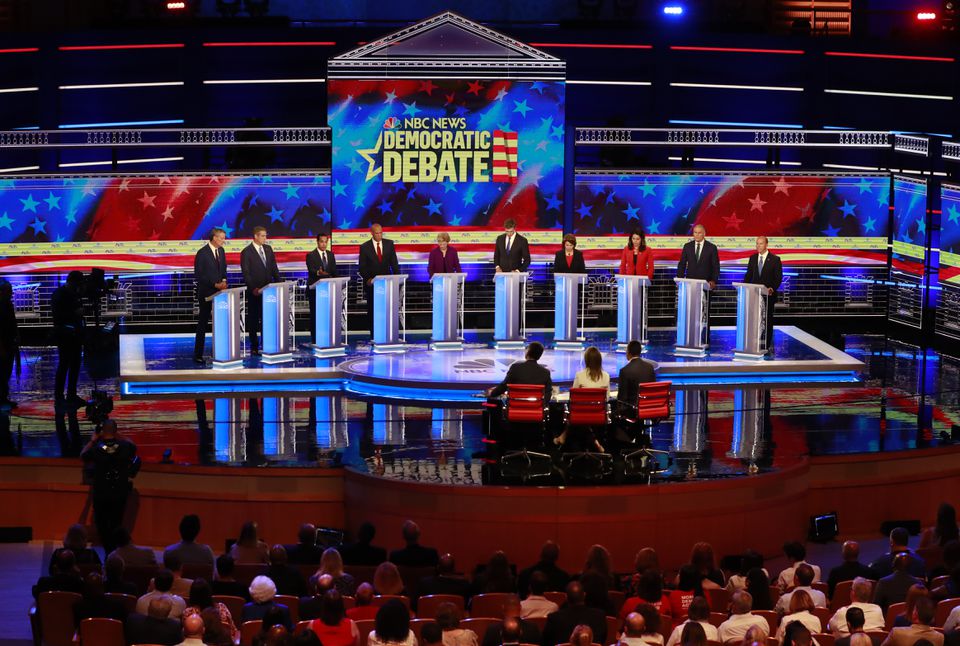 The first thing to mention is that no new ground was covered or discovered on NBC’s Democrat Party Presidential Debates this week. It went exactly as the Party big wigs wanted.

Anyone paying attention should have found them thoroughly boring. The pandering was predictable and offered up unapologetically. It was so obvious as to insult the intelligence of the American voters that may have been watching.

Political pandering was not invented by Democrats, but it is being perfected by them in 2019. Political pandering is defined as taking a position or positions that are not in the best interest of the entire body politic (the US) to secure the support of specific interest groups.

First, President Obama or any other candidate of color with significant gravitas are not on the ballot. The answer to the question on how to pull out the voters of color was painfully obvious; they will buy their votes with the promise of reparations for US slavery, which ended over 150 years ago.

Reparations would be paid to people who were never slaves and neither were their parents. Reparations to be paid by people whose not only never owned a slave but may have lost relatives in the war to end slavery.

The next pandering behavior was the candidates speaking in Spanish. This is the “I speak your language” pander. The implication that Spanish speaking peoples in the US are so shallow and devoid of serious issues that they can be won over by a bi-lingual candidate.

Every Democrat party candidate is in favor of open borders and having no penalty for entering or staying in America illegally. To complicate that position, they also want them licensed to drive and given full voting rights, mainly in Texas and Florida, as to increase the chances of Democrats securing those states electoral votes.

The next pander was to the far leftwing, Trump Derangement Syndrome infected party base. It assumes that all voters live in an MSNBC, Huffington Post, Washington Post information bubble that denies the Trump Economy, the low unemployment across every calculated demographic group, and the resurgent manufacturing sector.

Elizabeth Warren came out of the box criticizing the booming economy, implying it didn’t help the folks on the lower end of the economic scale. Folks, I am from West Virginia. Few states have it worse than WV economically.

The U.S. Department of Commerce’s Bureau of Economic Analysis reported Tuesday that West Virginia led the nation in personal income growth for the first quarter of 2019 with a 5.6 percent growth rate.

Nationally, personal income increased 3.4 percent at an annual rate in the first quarter of 2019, a deceleration from the 4.1 percent increase in the fourth quarter of 2018, according to the estimates released Tuesday. Perhaps Ms. Warren speaks with a forked tongue about the economy.

Bernie Sanders pandering to his hardcore, militant, socialist base promised middle class tax increases. Yes, reread that sentence and imagine a welder, pipe fitter or electrician buying into that!

Pandering is becoming normal on the left who have to keep the reigns on such largess of special interests who believe their issue is the issue of the century and then dole out cash to secure it.

President Trump resisted the urge to pander. He simply made a list of promises and then did everything possible to secure them. While 20 Democratic presidential hopefuls pander to the unions, Trump invoked policies to put them back to work and reopen factories and rework bad trade deals, as he promised.

As the presidential field winnows, keep your pander filter on full blast. You will find that once you eliminate the pandering, the Democrats have nothing to offer.

[…] Latest Posts Are today’s Democrats like the Spies of Moses? Population Control and Social Engineering on a Vast… A Free Market Path to “Free” College Tuition New laws in Virginia July 1st Let’s Set the Record Straight The State Central Committee Got It So Right Panderfest 1 & 2, the 2019 Democrat Presidential… […]