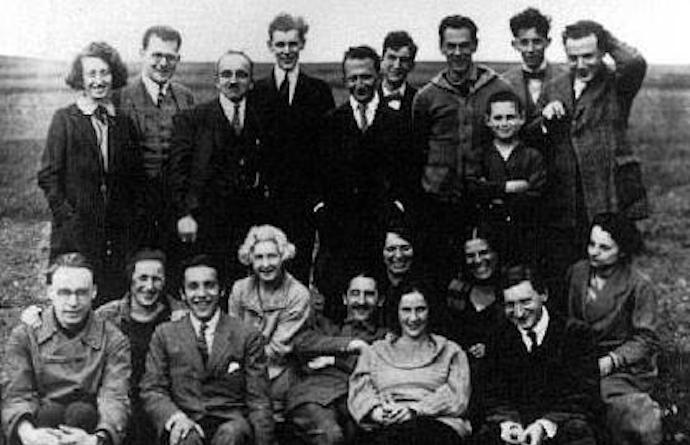 “We must organize the intellectuals and use them to make Western civilization stink. Only then, after they have corrupted all its values and made life impossible, can we impose the dictatorship of the proletariat.”

In the first part of “Understanding the Ashkenazi,” I discussed how the term “Ashkenazi” conveys a sense of ethnicity – and not religion, and I attempted to answer two questions:  (1) Why are Jews, that is, Ashkenazi or European Jews, so smart?  and (2) Why are Ashkenazi so liberal?  I attributed much of Ashkenazi brilliance to their status as the only group in history whose members were forced into occupations requiring cognitive ability, unlike their non-Ashkenazi Jewish cousins who lived under more tolerant Islamic rule in the Middle East.  The Ashkenazi are a great people, who have made an astonishingly great number of accomplishments for humanity.  But unfortunately, where there is potential for great good, there is also potential for great evil, and the Ashkenazi are no exception.

The most influential Ashkenazi in world history was Karl Marx, whose theories about society, economics, and politics inspired a generation of revolutionaries in Russia, many of them Ashkenazi, to seize political power and establish a communist society.  Not only were the majority of Bolshevik leaders Ashkenazi  who changed their Yiddish names to Russian ones, such as Leon Trotsky (Bronstein), Karl Radek (Sobeloshn), Lev Kamenev (Rozenfeld), Grigori Sokolnokov (Brilliant) and Grigori Zinoviev (Apfelbaum), but the leader of the “Russian” Revolution himself, Vladimir Lenin, had Ashkenazi ancestry that was kept secret from the Russian people.

In addition to the Ashkenazi takeover of Russia, short-lived Soviet republics (1919) in Bavaria and Prussia were led mostly by Ashkenazi Marxists – Rosa Luxembourg, Ernst Toller, Gustav Landauer, and Eugene Levine.  The German Army quickly put down revolts, but anyone who thinks that this brief Ashkenazi-Marxist power grab had nothing to do with the rise of Nazism that same year in Bavaria is not living in Realville.

In the aftermath of the failed communist takeover in Germany, a group of mostly Ashkenazi Marxists formed what became known as The Frankfurt Institute of Social Research.  Their leader, Max Horkheimer, coined a term that embodied their corrupt philosophy designed to destroy Western society and culture using Marxist dialectic – Critical Theory, which quite literary is a theory of criticizing everyone and everything everywhere.  Having to flee Germany after the Nazi takeover, they came to America and immediately began to undermine American institutions.  They were wildly successful, particularly Herbert Marcusse, who pushed the idea of “repressive tolerance,” which advocated holding the views of marginalized minorities in high regard, while attempting to silence the attitudes and beliefs of the prevailing majority.  As this philosophy gradually eked into college curricula, the news media, and Hollywood, America became infested with pervasive cultural Marxism, which we know today by the more familiar term, political correctness.  For those who want to know how PC came to dominate our society, look no further than the Ashkenazi Marxists of the “Frankfurt School.”

So, having discussed the small number of Ashkenazi evil doers who managed to concoct and unleash horrible forces which have undermined and subverted our society, I must mention that no group throughout history has suffered more collective guilt for the sins of the few as the Ashkenazi have.  Louis Farrakhan may be a kook and bigot, but when he said that the real tragedy of the Holocaust was that “millions of innocent little Jews had to die for the sins of a few hundred big Jews,” he was right.  For centuries, when either an individual or a small cabal of Ashkenazi had committed a crime, the entire community was called into account.  Thus, every Ashkenazi Jew had to wear the Star of David.  Every Ashkenazi Jew had to live within the ghetto walls or within the Czar’s Pale of Settlement.  And every Ashkenazi Jew the Nazis could get their hands on was sent to the gas chambers.

The maniacally genocidal policies of Nazi Germany must be considered when dealing with the Ashkenazi mindset today.  Just imagine if our federal government in the 1950s had referred to the Mafia as “organized Italianry” and had decided to destroy the Mafia by deporting or killing every single Italian-American in our country, rather than targeting individual Mafioso and their henchmen.  Think of how the surviving Italians would feel today having paid the horrible prices for the sins of the relative few.  That is exactly what happened to the Ashkenazi and it will forever weigh upon them.  The result is a collective—but understandable—hypersensitivity among Ashkenazi when one of theirs is targeted.

As I mentioned in the first portion of this article, the Ashkenazi lean heavily to the Left. However, some of the most influential and effective thinkers on the Right are Ashkenazi – Charles Krauthammer, Mark Levin, Milton Friedman, Dennis Prager, Ben Shapiro, and David Horowitz.  Some of these preeminent thinkers used to be liberals.  My personal experience with Ashkenazi liberals is that many of them are not beyond the pale and will listen to reason if the information is presented in a personable and sensitive manner.  The Ashkenazi are a contemplative and ponderous group, and they will likely respond to our non-liberal points of view if we pose questions that demonstrate the contradictory nature of political correctness.  For example:

Perhaps it is because I myself am Ashkenazi and can exude “Yiddishkeit” (I grew up in a heavily Jewish area, attended Jewish summer camps for six years, and took Yiddish at City College of New York) that my approach has been successful at times. Nevertheless, anyone who is politically astute and who cares about the future of our country should try, because every Ashkenazi who can be yanked from the clutches of the Left is a victory for those of us who work against the tide of political correctness.

The Ashkenazi are by and large an exceedingly smart, politically active, and affluent group who provide much of the financial support and intellectual fire power of the Left.  Take away that support, and the Left will implode.

And just imagine what a small army of Ben Shapiros could do for our side.  Oh, how it delights the imagination.