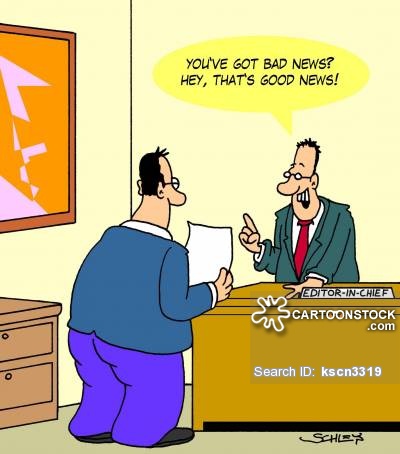 “Ah, there’s good news tonight!” was Gabriel Heatter’s signature radio phrase during the darkest days of World War II. Mr. Heatter1 had found that listeners were buoyed by that upbeat phrase during some very bad periods in the war, so he continued it. His emphasis on the bright side of the news actually helped the country through a tough era.

Except for a few isolated upbeat-voices – like Paul Harvey2, who sadly left us in 2009 – there has been nothing like that for a long time. Most news reports – including news about the economy, war, business, and even the weather – are spun to match the political leanings of media people who, according to polls, vote 90% Democrat. When a Republican is president, it’s all bad news, all the time. (Statistics compiled by media watchdogs affirm this.)

Currently powerless in both the executive and legislative branches, Democrats have become, more than ever, the party of “bad news tonight.” Even if the news isn’t truly bad, the media try to make it seem so. Disaster and ruin are now the stock-in-trade of FDR’s once confident and optimistic party. The constant trashing of Mr. Trump and his family has reached disgusting new lows. In 65 years of following presidential politics I’ve never seen anything like it.

Is unemployment up? A page-1 story will trumpet it, along with pathetic accounts of people out of work, lacking health insurance, and losing their homes. Mr. Trump will get a drubbing. Is unemployment down (as now)? A two-inch story which doesn’t mention Mr. Trump is buried on page C-28, if it is printed at all. (No need to emphasize something that might help the GOP.)

The economy has long been an effective weapon for Democrats wishing to regain power. When the steel industry was idled by a four-month strike in 1959, the US economy fell into a mild recession because so many industries – including auto-makers – were hurt. John Kennedy rode the downturn to a razor-thin presidential victory in 1960.

After twelve years of booming economic growth under Ronald Reagan and George H. W. Bush, the economy hit a brief plateau in 1992. The 1990-’91 Gulf War caused some of the lull, but the higher tax rates Mr. Bush signed when he broke his “no new taxes” pledge also hurt. Running on “It’s the economy, stupid,” Bill Clinton bashed “the worst economy since the Great Depression” and promised “change.” Third-party candidate Ross Perot split the GOP-vote to let Mr. Clinton slip in. Post-election reports read: “Surprise! The economy isn’t as bad as we said.”

Mr. Bush (41) later admitted that he couldn’t believe the absurd “Great Depression” claim would fly. Suffering from generational “gaposis,” he evidently didn’t realize that most voters hadn’t lived through the depression. (Nor did Mr. Clinton, born in 1946.)

Today, a year into Mr. Trump’s term, the economy is growing by 3%+ a year. Inflation is under control and unemployment is at record-lows. Millions of new jobs have been created. Wages and tax-receipts are up. People are spending. Business is booming. Happy days are here again.

Yet we hear only a steady drumbeat of bad news from Big Media. Shrugging at the good numbers, reporters say people are worried that a collapse is coming. The media use this worry to paint the economic picture gray. Besides Mr. Trump is a racist and probably nuts. They accuse doctors of lying about the president’s health (“excellent”), and pepper the White House Press Secretary with absurd questions about whether Mr. Trump really weighs 239. Remember when they did this to Mrs. Clinton? (I don’t either.)

Mr. Bush (43) and his advisors were frustrated over “no credit” for a strong economy. But we were waging a shooting-war in Iraq. Perhaps they didn’t understand how war sours people’s outlook. Democrats know that war can make a booming economy seem inconsequential. Their bad-news tom-tom, throbbing month after month, drowned out the strong economic data.

Ugly TV-images of violence and death were a fabulous bad news generator for Democrats during Mr. Bush’s two terms. Sensing that they might win control of the Congress because the public was sick of the war, Dems abandoned all pretense of “linking arms at the water’s edge,” as the loyal opposition. In 2006, the charges were flying:

The war is “a mess;” it’s unwinnable; it’s a civil war, it’s the wrong war, it’s Vietnam II. We can’t catch Osama; it doesn’t matter if we catch him. Bush is an idiot; Rumsfeld is incompetent; they’re all liars. Cheney started the war for Haliburton. The Jihadists have legitimate aims; we’re no better than they are; they’re everywhere; etc., etc.

The “blogosphere” abounded with hate-spewing web sites whose writers seemed willing to lose the war just to harm George W. Bush and the Republicans. Charging Defense Secretary Donald Rumsfeld with making (gasp) “mistakes” was the blood-sport. (Liberal historians say no past official ever made a mistake in a war.) Senator Hillary Clinton lashed Mr. Rumsfeld for errors in judgment and faulty predictions. She demanded his resignation, asking, “Why should we believe anything you say?” Responding to Mrs. Clinton’s angry charges, Mr. Rumsfeld said, “Well, my goodness…,” before defending Mr. Bush’s war policies, aims, achievements and predictions.

Obviously I jest about previous American war leaders making no mistakes. Our wars – mostly run by Democrats – have abounded with mistakes. Some were disastrous. War is often compared with football. It’s a good metaphor, but as a tennis player I realize how much my sport resembles war. Even the greatest players make mistakes – often at key moments in a match. If they got as upset over hitting a ball into the net as I sometimes do, they couldn’t continue. You try to make fewer errors than your opponent, retain composure, and keep hitting the ball.

War is so much like that. Repeated mistakes result from inadequate intelligence or faulty reading of it, or misjudgment of the enemy’s strength, resolve, and intentions. People fail at every level. Plans can be poorly made or improperly executed. Equipment might be inadequate. Any experienced soldier will agree that snafus and bungling are inevitable in war. Yet eventually a winner emerges who persevered despite his mistakes.

Part of me worries that Americans are too inexperienced with waging protracted war to know that wartime mistakes are common. But another part of me believes that we are smarter than this. Hopefully, most of us understand that winning is a matter of overcoming mistakes.

Closer to home, the weather can be a great bad-news opportunity. In 2005 Katrina flooded and destroyed New Orleans. Local response to the disaster was grossly mismanaged. Some city cops, fleeing in their patrol cars, were stopped as far away as Florida by state police who assumed the cruisers were stolen. Louisiana Governor Kathleen Blanco waited for days to declare the state a “disaster area,” delaying federal aid. And Mayor Ray Nagin – who deliberately didn’t provision the Superdome so people wouldn’t linger there – denounced Mr. Bush in salty language because the president flew over the flooded region instead of making a cameo appearance with Mr. Nagin and city officials. (Mr. Nagin wanted that “shirtsleeves” photo-op with Mr. Bush.)

Claiming that the Federal Emergency Management Agency (FEMA) had “massively failed” during the unprecedented disaster, the media mercilessly lashed the agency and its director, Michael Brown. Under political pressure, Mr. Bush removed Mr. Brown. But the media’s drumbeat over federal “incompetence” continued long after it was revealed that there was plenty of blame to go around.

Mr. Bush was even “blamed” for the storm because he had rejected the Koyoto climate-treaty. Environmentalists said Koyoto would stop global warming by reducing carbon emissions. They claimed that the warming causes more hurricanes of greater intensity. (Many scientists differ with both claims.) Katrina was grossly politicized, but the 2017 hurricane season outdid it, since Mr. Trump cancelled many of Mr. Obama’s climate-change-prevention measures and explicitly took us out of the Paris Accords.

The current winter has disappointed Democrats clinging to “global warming.” Record cold has put parts of the country in an unaccustomed deep-freeze, causing Dems to retag warming as “climate change.” But the jury is still out on whether it’s a winning political strategy. (Grandma always said the weather seldom cooperates.)

Will the bad news strategy work for Democrats? Maybe. Most people don’t get too excited about economic news unless they are out of work or lose big in the stock market. Energy prices have stabilized due to increased American oil-production. Republicans’ hard-won tax-reform is generating a surging economy and a stock-market up 40% in value since Mr. Trump’s election. All-bad-news TV networks like CNN continue bashing Mr. Trump, but fewer and fewer normal people are listening.

The real verdict comes in November. Mr. Trump isn’t running, so the question will be whether 435 districts will elect representatives, and seventeen states will choose senators, who will put Democrats in charge, derail the Trump-express, and try to impeach him. Color me crazy, but I doubt it. Campaigning on bad news and hoping your opponent’s government will fail – indeed, trying to make it fail – are not long-term winning strategies for a party. What Democrats offer is: “The tax-law helped only The Rich; Donald Trump is an idiot; and he stole the election.” Some vision. Hopefully, voters dumb enough to resonate with it won’t get around to voting.

Nine months from now millions of voters will step into voting booths. In that brief, quiet moment many will ask themselves, “Do I really want a party that will raise my taxes, make gas expensive, slow the economy, trash my personal values (including marriage), protect terrorists, shackle the cops, and flood the country with illegals?” Americans were smart enough to elect Mr. Trump. I hope they’ll give him the Congress he needs to keep going.

[1] See a brief sketch of Gabriel Heatter’s life and career at http://www.otr.com/heatter.html

[2] Paul Harvey News and Comment was carried by ABC since 1951, and The Rest of the Story since 1946. Mr. Harvey died in 2009 at age 90. Those of us who loved his reports will be repeating some of his stories for a long time. 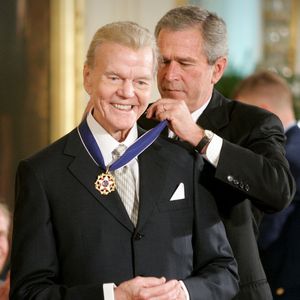