Governor Terry “Weâ€™ll have drinks at lunch” McAuliffe is at it again with another blatant pay-for-play move. Last week he vetoed HB1040, which would have offered citizens a chance to appeal, in civil court, their ticket for running a red light when caught by a red light camera. The technology here is not exactly sound and HB1040 hoped to bring in the human element more so than it already is so that tickets issued are in fact legit. Seems harmless enough on our courts and beneficial to the community, so why veto it?

The bill was introduced by Del. Johnny Joannou, a Democrat representing Portsmouth, and carried the support of co-patron Del. David Ramadan, a Republican representing parts of Loudoun and Prince William counties, giving the bill bipartisan support and, if you will, cross-geography support. It passed the House of Delegates with an impressive 99 to 0 vote. Then it passed the Senate with a commanding 38 to 1 vote. But the king who sits in the governorâ€™s mansion decided to ignore the mandate this bill received from the legislature. Why? Easy answer: money, money, money.

As reported by thenewspaper.com, McAuliffeâ€™s campaign was paid handsomely by the lobbying firm Hunton & Williams who was hired by the red light camera company Redflex Traffic Systems. And by handsomely I mean $35,599. The strings attached here must have pulled Governor McAuliffe to repay the favor, which is standard practice in his pay-for-play administration.

The issue here is simple; pay-for-play trumps democracy. In this specific situation a bill passed both chambers by a total of 137 to 1, with the only nay vote from the entire General Assembly coming from Sen. Bryce Reeves, who Hunton & Williams gave $1,203 to since 2012.

Especially considering how polarized todayâ€™s Senate is, anything that gets out of that chamber with 38 out of 40 votes is a piece of legislation that deserves to be included into law. The General Assembly is full of lawyers and Governor McAuliffe is a professional fundraiser, not a lawyer. According to his veto statement Governor McAuliffe is concerned about the court system. Lawyers who work in the court system are not concerned. Iâ€™m going with the lawyers on this one.

It certainly must be frustrating to members of the General Assembly who send the governor legislation aimed at helping to make sure the justice system provides justice and avoids, as much as possible, mistakes. The governor will gladly take your money; just remember that after you donate you will need to instruct him on how to govern. 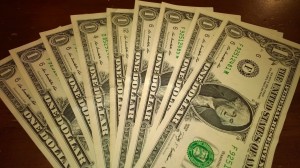 Pay-For-Play with Gov. McAuliffe was last modified: April 17th, 2014 by Taller Than Madison

your accidental comment submissions have been removed as per your request