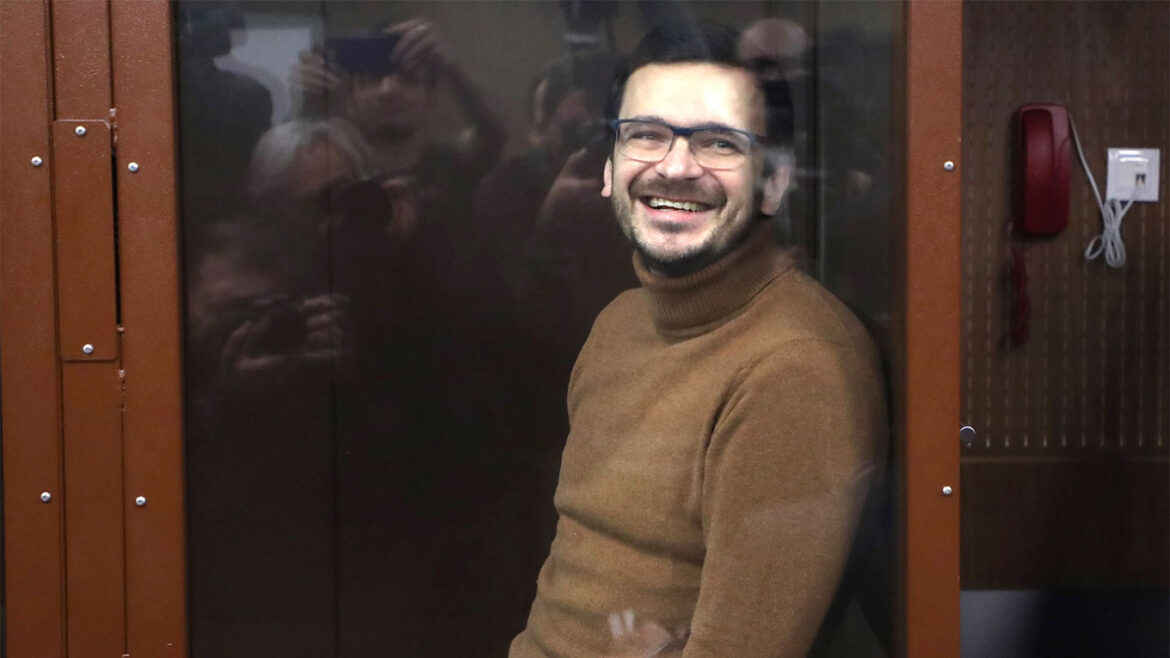 ‘People Are Running From You, Mr. President. Can’t You See?’

This article was published yesterday in The Moscow Times, and is reprinted here in it’s entirety.

[I pause to salute a truth-teller. In our culture and in the whole world there is nothing more radical than the truth. There is nothing so dangerous as the truth. There is nothing so rare and valuable as the truth. Every enemy of the truth is an enemy of goodness, virtue, justice, mercy, and ultimately God. The world was born in Truth and by Truth. It is why the Prince of this world is always at war with Truth. This, of course, is no less true in the US and Europe right this moment, than in Russia or China. Mr. Yashin joins a rare group of men and women who have stood for the truth – and the right to speak that truth – without bending, without bowing to raw force and political power. Mr. Yashin has joined history. Michael Giere.]

Russian opposition politician and Kremlin critic Ilya Yashin is currently standing trial in Moscow for spreading “false information” about the Russian army after he published accounts of the civilian massacre in the Ukrainian town of Buch earlier this year. Prosecutors have asked the court to sentence Yashin to 9 years in jail. As he awaits his sentencing on Friday, we [The Moscow Times] publish a redacted version of his closing address to the court.

You have to agree that the phrase “the defendant’s last word” sounds very somber as if after I speak they’ll sew my mouth shut and forbid me from ever speaking again.

Everyone understands that this is precisely the point. I am being isolated from society and imprisoned because they want me to remain silent, as our parliament is no longer a place for discussion and Russia must now silently agree with any measures its government takes.

But I promise that as long as I live I’ll never make peace with that. My mission is to tell the truth. I’ve spoken it on city squares, in television studios, in parliament and I will not cease to speak it from behind bars either. As one classic author put it: “Lies are the religion of slaves and masters. Truth is the god of the free man.”

Your Honour, I have a principle that I’ve followed for many years now: do what you must, come what may. When the hostilities began, I did not doubt what I should do even for a second.

I must remain in Russia, I must speak the truth loudly, and I must stop the bloodshed at any cost. It physically pains me to think how many people have been killed in this war, how many lives have been ruined, and how many families have lost their homes. You cannot be indifferent. And I swear I do not regret anything. It’s better to spend 10 years behind bars as an honest man than quietly burn with shame over the blood spilled by your government.

Of course, Your Honour, I’m not expecting a miracle here. You know I’m not guilty, but I know that you’re pressured by the system. It is obvious that you will have to issue a guilty verdict. But I hold no ill will toward you, and I wish you no ill. But try to do everything that is in your power to avoid injustice. Remember that it’s not just my personal fate that depends on your verdict — this verdict is against the part of our society that wants to live a peaceful and civilized life. The part of society that, perhaps, you belong to, Your Honour.

I’d also like to use this platform to address Russian President Vladimir Putin. The man responsible for this bloodbath who signed the “military censorship” law, and according to whose will I am currently in prison.

Mr. Putin, when you look at the consequences of this terrible war, you probably already understand the gravity of the mistake that you made on Feb. 24. No one greeted our army with flowers. They call us invaders and occupiers. Your name is now firmly associated with the words “death” and “destruction.”

You brought about a terrible tragedy for the Ukrainian people, who will probably never forgive us for it. But you’re not just waging a war on Ukrainians — you’re at war with your own citizens, too.

You’re sending off hundreds of thousands of Russians to war. Many will return disabled or lose their minds from what they’ve seen and gone through. To you, this is just a death toll, a number in a column. But to many families, this means the unbearable pain of losing a husband, a father or a son.

Hundreds of thousands of our citizens have left their country because they don’t want to kill or be killed. People are running from you, Mr. President. Can’t you see?

You’re undermining the basis of our economic security. Your switch to a wartime economy is turning our country backward. Have you forgotten that this policy already led our country to ruin in the past?

Let this be a voice crying out in the wilderness, but I’m calling on you, Mr. Putin, to stop this madness right now. We need to recognize that our policy on Ukraine was a mistake, to withdraw our troops from its territory and to reach a diplomatic solution to the conflict.

Remember that every new day of the war brings new victims. Enough.

Finally, I want to address the people who have followed these court proceedings, who have supported me for all these months, and who are anxiously waiting for the verdict.

My friends! No matter what verdict the court gives, no matter how tough that verdict is, this must not break you. I realize how difficult it is for you right now, I realize that you feel hopeless and powerless. But you must not give up.

Please do not give into despair and don’t forget that this is our country. It is worth fighting for. Be brave, do not retreat in the face of evil. Resist. Stand your ground on your street, in your city. And most importantly — be there for each other. There are many more of us than you think, and together we have enormous power.

Don’t worry about me. I promise to endure my tribulations without complaint and that I won’t lose my integrity. In turn, please promise me that you’ll not lose your optimism and won’t forget how to smile. Because the moment we lose our ability to find joy in life is the moment they win.

Believe me, Russia will one day be free and happy.

This is an edited version of a translation provided by Novaya Gazeta Europe. The views expressed in opinion pieces do not necessarily reflect the position of The Moscow Times.

‘People Are Running From You, Mr. President. Can’t You See?’ was last modified: December 8th, 2022 by Michael Giere

If only American journalists were as honest as their Russian counterpart.

I thought we supported Russia on this blog….

When I first read the title, I thought the article was going to be about Biden. Tyranny is tyranny. Tyrants are birds of a feather.