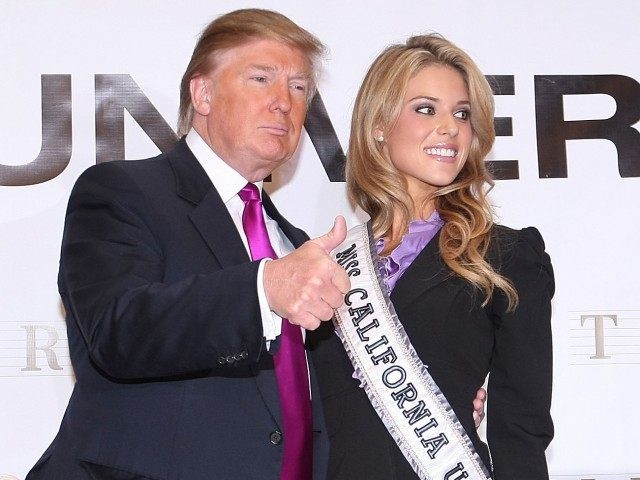 Leftist boycotts over policy differences with companies, sports teams were emboldened by giving in to the gay marriage lobby

What was the worst decision Donald Trump ever made?  In my view, it may have been his reversal 10 years ago this week when he decided to dismiss Carrie Prejean as Miss USA.

The stated reason was “continued contract violations” with the pageant, but for me and millions of conservatives across the nation, she was replaced because of her opposition to gay marriage, on religious grounds, did her in.   Trump was the principal owner of Miss USA at the time and made a fateful decision, which I believe helped embolden Leftist organizations to take down anyone who did not espouse their dogma.

As Obama and the Democrats were sweeping the November 2008 elections, winning the White House and their majorities in Congress, in California,   a coalition of Evangelical, Mormon and African American ministries helped pass a referendum to ban gay marriage in the Golden State – a state with a very large openly gay population.

This was a stinging blow to the “marriage equality movement,” and a rallying cry to stop future referenda – largely, by getting African American ministries to stop joining in.

Amid this angst by gay marriage advocates, comes Carrie Prejean, who was Miss California, ironically, who was asked by judge Perez Hilton, a music/drama critic, if she supported gay marriage or not, during the Q&A when she was a finalist at the February 2009 pageant.

Hilton’s face soured and despite his opposition, she won the crown.

Within days, he called her a “dumb bitch” and stated: “She gave an awful, awful answer that alienated so many people.”

Trump  defended Prejean’s answer, saying that “Miss California has done a wonderful job” and that “It wasn’t a bad answer. That was simply her belief.”

Later, the National Organization for Marriage used footage from the pageant for a television advertisement that warned that same-sex marriage activists wanted to silence opposition.  Prejean also hired a Christian public relations firm.  In late April, Prejean presented an award at the Gospel Music Association‘s 2009 Dove Awards in Nashville, Tennessee. Prejean also spoke at Liberty University‘s final convocation of the year on April 29, 2009 .  So, she was becoming a champion for traditional marriage and conservatives.

The gay marriage lobby went into over drive to get her toppled.

Allegations surfaced that Prejean violated her Miss USA contract by taking partially nude modeling photos.  They appeared on a gossip blog. Prejean defended the photos and Trump agreed, stating, “We are in the 21st century. We have determined the pictures taken are fine” and that “in some cases the pictures were lovely.”

It stands to reason that Prejean had become subject to opposition research not unlike a political candidate.  Though there is no trace to any of the gay marriage organizations, the timing of the release of the photos and other material leads me to believe that she was being publicly sandbagged in order for Trump to pull her title.

And he did that on June 10, 2009, citing “continued breach of contract issues.” Like a cast member of the “Apprentice,” Carrie Prejean was fired.

In August 2009, Prejean sued Miss California USA officials on a variety of civil grounds, including libel, slander, religious discrimination, and the unauthorized release of private medical records.  She settled but not before   CNN s reported that Prejean’s settlement with Miss California USA officials was prompted by the revelation of a “sex tape“, a home video involving Prejean.

Prejean subsequently married an NFL quarterback and had a family.  She’s been pretty much out of the media for years.

In 2015, as we know, the U.S. Supreme Court ruled gay marriage was constitutional and struck down some 31 duly passed state constitutional amendments banning the practice, including  Virginia’s which passed in 2006.

However, the Prejean firing, coupled with Obama’s rise and “transforming of America”   unleashed a score of Leftist activists who have used pressure tactics, with help from public relations and grass roots firms, and the universities, to go after an array of conservative politicians, pundits and even companies and sports teams whom they feel do not tout the liberal politically correct view.

Hobby Lobby, Chick-fil-A and even Whole Foods have been subject to boycotts and threats. Alabama, Georgia now face corporations pulling their business due to passage of abortion laws, and  North Carolina faced the same corporate ire over its bathroom law in 2016. I wrote on these pages how pressure from Black Lives Matter led the Philadelphia Flyers to cancel, after nearly 40 years, the singing of Kate Smith’s God Bless America  , and removal of her statue in front of their arena.

Conservatives have been incapable of forming enough of a counterforce via protest and inside pressure to turn this around.

So, while I support the President and like the job he is doing and will support his re-election, his buckling and removal of Carrie Prejean may have been his worst decision as it emboldened the far Left to try to ruin individuals who do not support their views.