Photo of Kerry and McCain embrace over Syrian War

Senators John Kerry and John McCain Â hug over their support for US intervention in Syria: 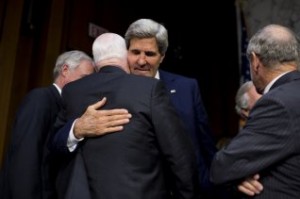 Maybe it’s just me, but I find this picture sickening. Â Every poll shows the majority of Americans opposed action in Syria and no one on Capitol Hill is paying any attention to us.