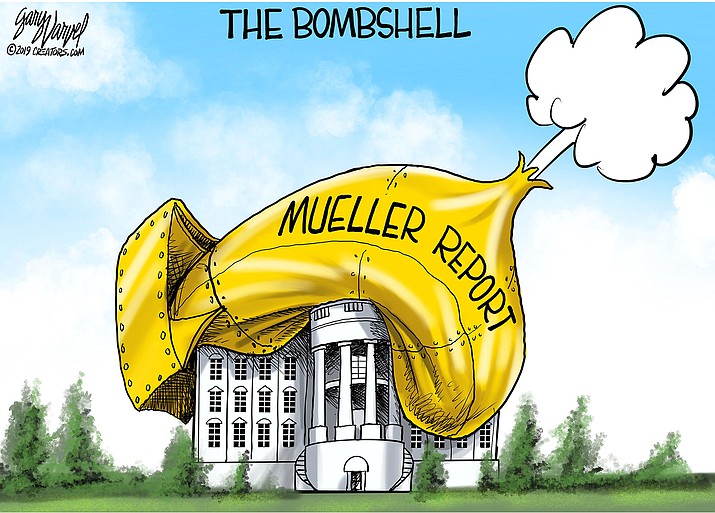 For two years a heavy bomber piloted by Robert Mueller circled Washington DC carrying The Mother Of All Political Bombs. Almost every day, some politician or media figure pointed to the sky and exclaimed: “Trump’s sky is falling, here comes the big one.”

Day after day, no bomb fell. Until on April 18, 2019, the bomb bay door opened, and the bomb finally fell. It crashed down on Washington with a mighty thud….but never exploded. It splashed mud all over the Democrats and the networks and the Washington Post and the New York Times but Trump came out clean.

The Mother Of All Political Bombs failed to explode. What do they do now? They bet the farm, the Prius and their first-born child on this bomb. Democrats staked it all on Donald J. Trump being a Russian agent.

Well, he’s not. So, what’s next? Having made these fantastical claims about the total devastation to be wrought on the Trump Presidency, which turned out to be just that, fantasy, what’s the plan now? How do they move forward?

Two dozen Democrat presidential wannabes want to carry the battle forward using conventional Democrat weapons. Those weapons are easily recognizable from previous presidential campaigns and want to appear as if the Democrats are unified.

The truth is, the Democrats and their presidential candidates are not unified. Anything but. They don’t know what to do. They are split, divided into three groups. The first group is the impeachment brigade (AKA Nuclear Option). They are making a lot of noise. This is the teeth-grinding, seething, Trump-hating base. House members AOC, Rashida Tlaib, Al Greene and others demand it. Candidates Warren, Castro, and Swalwell are in this camp, too: Impeach!

The second group I call the “investigate everything and everybody who ever knew Trump” people. They’re not sure there are grounds for impeachment, so they’re looking for dirt to slime the president. “Surely there’s something in his taxes or his businesses or his family or something to bring him down.” This is the endless investigation crowd: They assume everyone hates Trump as much as they do and condone the tearing down of the Trump presidency. They assume it’s their “high” road to winning the White House.

There’s a third group which wants to run on issues, like health care. We haven’t heard much from them, but who knows what Joe Biden will end up saying. Any candidate wanting to appeal to the blue-collar democrat voter will latch onto the “Republicans will gut Social Security, only give tax breaks to the rich, hate immigrants and will end all abortions.” All lies of course but lies that get traction for them from time to time.

Here’s my opinion: None of these groups has a viable strategy.

Group One: “Impeach him” … no grounds exist! Even if it passed the House, minus Russian collusion, it would never get two-thirds support in the Senate.

Group Two: Slime him! Serious miscalculation. This gets old, quick. It’s actually already too old.  In my judgment, America is not ready to remove a president because the far left and some politicians may loathe him.

Group Three: The most dangerous Democrat strategy of all, run on the issues! OK, but are the Democrats sure that’s an election winner?  With a booming economy, energy independence, rising wages, and full employment, the Democrats will have a hard time showing they can do it better.

The debate I want to see is one on the issues. I want Democrats to explain how president Trump did, in two years, what President Obama could not do in eight. Not just turn the economy around, but turbo-charge it.

I want the Democrats to debate against full employment and rising wages. I want them to explain how the Green New Deal will continue the economic boon President Trump created rather than kill it.

There you have it: A party split apart by the very bomb that was supposed to bring Democrats back to power and “hate-Trump” unity!