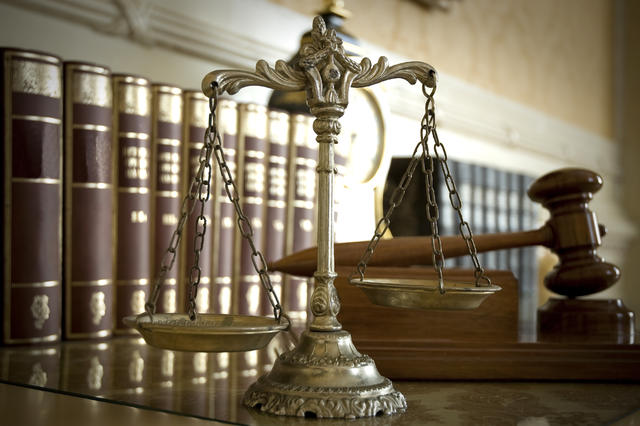 As we reported at the time, the litigation against the Republican Party for overturning the illegal implementation of the divisive practice of “slating” in Campbell County last year was thrown out of court.  This is the case that involved the faction led by John “Slater” Ferguson sending a blast email out to all teachers and other county employees telling them they don’t have to be a Republican to participate in the election of the Republican Chairman and Republican Committee, and that if they didn’t show up to participate and elect the desired slate, the “extremists” would succeed in cutting taxes and spending, thus endangering the jobs of county employees.

In dismissing the litigation initiated against the Party, the judge in that case held that the Party has a fundamental constitutional right to determine who participates in its functions, and that the courts have no place in interfering with the exercise of that right.

The latest?  After being ordered, as a result of the appeals process, to hand over the checkbook and papers of the local Republican committee to the rightful chairman, the slaters refused to do so, resulting in new litigation (before the same judge) last month seeking to force them to do so and to cease representing to the public that they were officials within the Republican Party.  A copy of the complaint is available here.

We were told when this controversy was at its peak that the slaters were good, conservative Republicans who were only seeking to bring back sanity to the local committee.  Well, I don’t know about “conservative,” but I can tell you they’re not good Republicans.  In fact, Ferguson himself, along with a few of his allies, are actually running as third-party challengers and against the nominees of the Republican Party in this year’s Campbell County Board of Supervisors elections.  #Vindication. 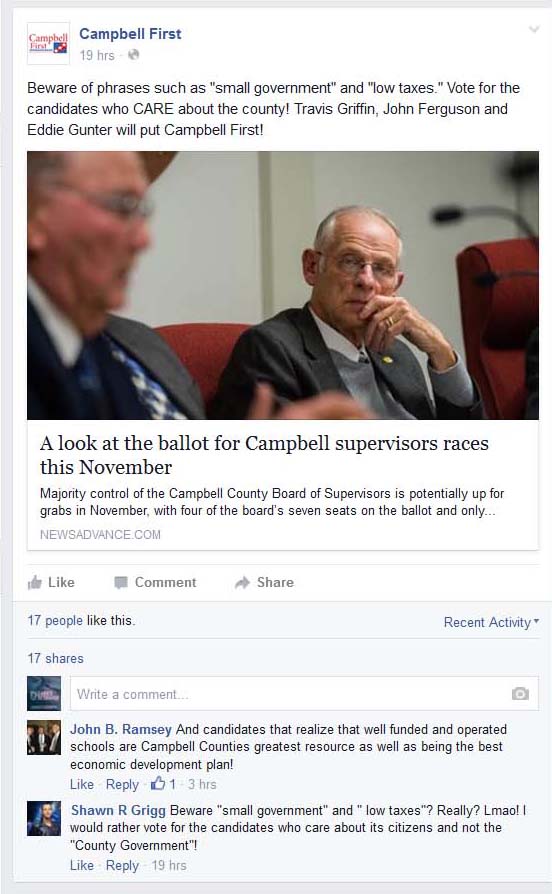 Fauquier Litigation Against the Republican Party

Led by former 10th District Chairman and establishment fixture Jim Rich, a group of plaintiffs allied with the liberal Piedmont Environmental Council cemented their control over the Fauquier Republican Committee in 2014 by inviting “Democrats, Progressives, Independents, Libertarians – all registered voters in Fauquier County” to participate in the Republican Committee’s internal elections, and then taking no steps at all to enforce the requirements for participation in GOP functions as required under the state party’s rules.  When, upon appeal, the 1st District Republican Committee and later the governing State Central Committee overturned the election on this basis, the liberals sued the Party.

On the eve of the hearing that would have dispensed the suit (likely in a manner similar to, and on the same grounds as the Campbell County matter), last week the plaintiffs dropped their suit rather than be bound by a negative decision.  This favorable resolution for the Party paves the way for enforcement of the 1st District’s and state committee’s orders to administer a new election–free of encouraged participation by “Democrats, Progressives, Independents, Libertarians” in internal Party elections.

As attentive TBE readers know, the 24th Senate District Republican Committee, joined by 24th Senate District Republican primary challenger Dan Moxley, filed suit this spring against the State Board of Elections, seeking to enjoin enforcement of what is popularly known as the Incumbent Protection Act.  The IPA allows incumbent officeholders in the General Assembly to choose whatever method of re-nomination suits them best, regardless of whether the official Party body charged with making that determination disagrees.  Because of a misreading of the Republican Party’s rules (not taking full account of related provisions), the federal district court hearing the case dismissed the suit for lack of standing.

The plaintiffs have appealed that dismissal.  The latest is the parties have filed their briefs (see here and here for briefs from the LDC and Dan Moxley), and last week the 4th Circuit Court of Appeals agreed to take up the appeal, and will hear oral arguments the second week of December.

Many Virginia activists are unaware that, under current Virginia law, the party identification of candidates for the General Assembly, Congress, and all statewide offices appears next to each candidate’s name on the November general election ballot, but does not appear next to candidates for county Boards of Supervisors.

A recent suit from Powhatan County aimed to change that.  Prompted by the strange case of Larry Nordvig, a former conservative Tea Party activist turned big government cheerleader, the Republican nominee to replace Nordvig soon encountered voters who believed Nordvig was the Republican nominee, and soon after that discovered that such confusion would not be dispelled by an (R) showing after his name on the ballot.  He and others similarly situated filed suit in the federal district court for the Eastern District against the State Board of Elections last month to seek to overturn the law that provides for this disparity, and to have an (R) placed after their names on this November’s ballot.

Yesterday, the court dismissed the suit on the doctrine of laches.  That is, the court reasoned that the law is well known, and that not only did the plaintiffs wait too long (“sleeping on their rights”) to file suit, their delay meant that the State Board and all of the local electoral boards that would be affected if the requested relief were to be granted would be unfairly prejudiced by it, given that localities are already in the process of getting ballots printed.  The court did not consider the constitutional merits of the complaint.

File this one under, “better luck next time.”  The order dismissing the suit can be found here.

As has been extensively reported here and elsewhere, two active federal suits challenging the decennial reapportionment completed by the General Assembly in 2011.  The first involved alleged “racial packing” of the Third Congressional district.  That case is currently pending appeal to the U.S. Supreme Court, but in the meantime the three-judge panel in the Eastern District of Virginia is overseeing a redrawing of the lines after the General Assembly failed to do so by the court’s September 1 deadline (in part a victim of politics surrounding a Virginia Supreme Court election).  The court is currently accepting recommendations from the public, and is in the process of choosing a special master to oversee evaluation of the competing proposals.  We understand that the Democrat plaintiffs here have recommended seriously partisan candidates for that job, and are playing hardball in opposing reasonable alternatives offered up by the Republican defendants.

The deadline for submissions of maps to be considered is next Friday, September 18.  The court could issue a decision and order choosing a new Congressional map at essentially any time thereafter.  However, if the Supreme Court indicates it will hear the appeal of the lower courts’ rulings, that would belay the any order by the three-judge panel.  We could hear from SCOTUS by the end of the month.

This case has the most potential for political upheaval and drama of any of them…by a long shot.  Filed by Democrat candidates for Virginia’s House of Delegates, the complaint alleges “racial packing” of minority districts, as in the Congressional lines case.  However, the facts and the testimony in this case differ from what was apparently on offer in the Congressional case, in that Republicans can credibly argue that race was not per se a primary motivating factor in where to draw the lines.  Rather, as House Appropriations Chairman and 2011 redistricting guru Chris Jones (R-Suffolk) testified in court, the lines were drawn for well-defined partisan reasons…packing Democrats as Democrats (where race was a relatively minor factor) into certain districts to dilute their impact elsewhere.

It is not clear that the facts and the law in this case line up just like they did in the Congressional case, but we’ll find out the court’s opinion on that soon enough.  The trial concluded in June, and post-trial briefs have been filed by both sides in July.  A ruling could come at any time.

So why does this have so much potential for drama?  Well, the plaintiffs knew exactly what they were doing when they chose a time to file their suit.  The aim is to get a ruling early enough to allow time for the Republicans to exhaust any appeals before it becomes too late to order a 2016 special election for House of Delegates using newly-drawn lines.  This is the nightmare scenario for Republicans, with court-ordered new lines that could potentially have far reaching effects on the partisan makeup of currently friendly GOP districts, and a concurrent presidential election that draws out the low-information voting bloc that makes up the core of Democrat political power.

Democrats can’t be too happy that the court is taking so long to issue its decision, because with each passing day it becomes more likely that—assuming the decision isn’t positive for the Republicans—the GOP appeal effort will succeed in pushing any final resolution past the latest date when a 2016 House of Delegates special election could be ordered.  In our estimation, the process would have to be exhausted and new lines drawn by no later than about May or June of next year in order to run an August primary for those seats (as was done in 2011, when the redistricting process in the General Assembly was delayed).