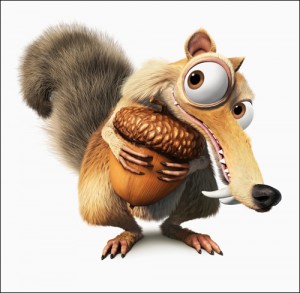 Have you ever seen the animated movie, Ice Age where the majority of the movie is this crazed squirrel obsessed with an acorn which he cannot quite hold on to but in his countless attempts, continually sets off a cavalcade of unfortunate events.  Enter Loudoun politics with Joe May and Jennifer Wexton—two squirrels so obsessed to get a seat in Richmond that they will do anything to be in the show.

Tax increasing, anti-gun and not-so-pro-life Joe May, at nearly 77 years old, bitter with his recent loss, relocates from his home of 30 years and abandons the party which has long since supported him (even in his RINO voting style), in a feeble attempt to regain what he lost—for what, one more term at best?

Democrat Jennifer Wexton abandons her husband and her two elementary school aged boys to rent a room in Leesburg to run for the same seat.  An attorney, obviously counseling herself (mistake) to leave her home and children to “run a scam” for lack of better words and manipulate the system.  This is the same Jennifer Wexton who, just several years prior, preached that she was not nor ever would be a “politician” when she unsuccessfully ran for Commonwealth’s Attorney.  Wow.

Lawfully, that is what they both had to do, move and claim residence elsewhere to run.

Ironically, had they just stayed put instead of chasing their obsession around the districts, the opportunity may have been time perfectly for them to run against each other as State Senator Dick Black will likely run for Congress.  Or, for that matter, they could have run for Wolf’s congressional seat themselves as you don’t have to reside in the same district to run for Congress.

So, if May and Wexton lose to Whitbeck, where do these two political squirrels go next? Would they both magically move back home or elsewhere to take a shot at the next open seat?  With this growing and seemingly acceptable trend the possibilities are endless, and hilarious.

It makes me wish for yet another seat to open up somewhere near just to see them “move” again.

The one thing true in all of this–“carpetbagger” is a term wholly insufficient to describe and define this new impatient political rodent that roves from district to district or candidacy to candidacy in search of acceptance, relevance and/or a platform from which to speak.  Political Squirrels—the new label and trend.

Worth mentioning, we recently had another squirrel jumping from race to race, young and energetic Ron Meyer.  However, Mr. Whitbeck and voters of the 33rd decisively and correctly propelled young Mr. Meyer back to rekindle his former congressional run in Fairfax.

Didn’t Senator Black move to the 1st Congressional District to run after Rep. Davis died? And didn’t he relocate his home after redistricting to run for the Senate?

Whoa! Spot on. It’s NOT about representing the people in your district, it’s about insufferable ego and personal ambition. It makes for very unattractive candidates. Just vote “NO” on these two.