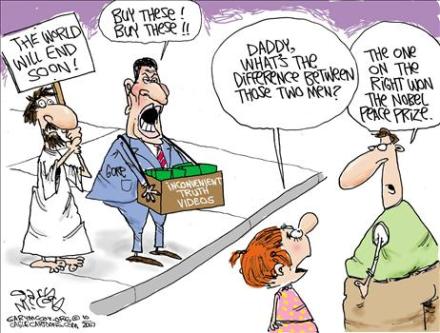 The great dream of progressive politicians is to find a problem whose solution appears to require unending increases in taxation or political control – preferably both – which produce no measurable improvement. Ideally, the situation would be one in which the perception is opposite to reality – i.e., where the “solution” actually worsens the true situation.

Question: Who would do anything this nutty?

Question: And what problem are we trying to “fix?”

Since the 1990s the Greenies have been pounding the taxation/government-control drum for lessening carbon-dioxide emissions, on the premise that CO2 is a “greenhouse gas” that increases the earth’s surface-temperature by trapping the heat of the sun. For a few years, warming seemed to be happening. Former Vice-president Al Gore built a whole new career (and a considerable fortune) by preaching that CO2 warms the planet, that increasing levels of the gas will overheat the earth and make it uninhabitable, and that we’re all going to roast or drown unless we do something. He preached a message of advancing doom, claiming it was “settled science” and that we had only a limited time to act. Global Warming Al won the Nobel Peace Prize in 2007 for his work. His film, An Inconvenient Truth, won the 2006 Academy Award for Best Documentary Feature. Big Al was flying high.

But real scientists noted that his claims were based on selectively chosen data and omission of important facts like the Roman and Medieval Warm Periods (250 BC to AD 400 and AD 900 to 1300) when temperatures rose without any industry and automobiles to blame it on. He also failed to mention the Little Ice Age (AD 1450-1850), when glaciers advanced, canals froze, and global temperatures plunged – again, without human assistance. Dr. Gore’s famous “hockey stick” graph of global temperatures vs. time ignores these salient periods, which were caused by entirely natural conditions beyond human control. 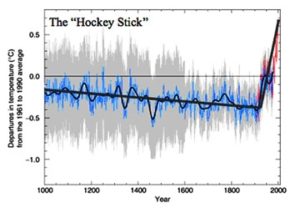 Although one would scarcely realize it from current news reports, the fact is that the earth has not warmed over the past 20 years. Instead, global cooling appears to be the new climate-dynamic. To illustrate this, I present as evidence a chronology of world-wide climate-events from February 2012 through March 2013, compiled by Geoffrey Pohanka. (http://isthereglobalcooling.com/ ) Mr. Pohanka argues the global cooling case, but I’ll let readers draw their own conclusions:

August 2012: South Africa has snow in all 9 provinces for first time in recorded history.

September 2012: Extent of Antarctic sea ice is the largest ever recorded on Sept 12. 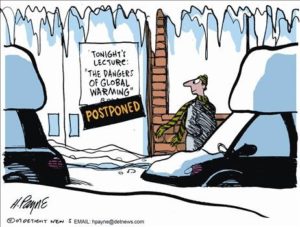 Never heard of most of this? It’s not surprising. Most of the above news never reached the USA’s liberal-controlled Mainstream Media, and certainly not the tender ears of their listeners. Worldwide record-setting cold and snow didn’t fit the global-warming story-line being peddled by liberal politicians and their media lapdogs. Many folks still think we’re going to roast or drown in rising oceans unless we send all of our money to the government. The Politicians’ Dream seemed reachable.

American environmentalists couldn’t understand the lack of interest in global warming shown by China, India and Russia. The above reports, plus similar accounts since, indicate why not: they’re up to their hips in snow over there, and they’re freezing to death. Why would they want to cool things down even more?

In the USA, our Lord High Protectors of the Environment know that global warming isn’t happening, so they’ve re-formed their blitzkrieg on fossil-fuels and America’s industrial economy as a campaign to stop climate-change. In support of this move some pols continue to push “ruinously expensive “cures” for the humanity-threatening problem of “anthropogenic climate-change.” We’ve poured billions into industries which have no effect on the climate – wasting fortunes that our people need to live and prosper.

To “save the planet,” President Obama launched a war on coal intended to make the price of electricity “skyrocket” (his term), and he tried to do the same for gasoline – ostensibly to protect the climate by lowering carbon-dioxide emissions. Much of the world knew that the earth wasn’t warming, but The Big O charged ahead with plans to sacrifice our national economy on the Altar of Climate. What he couldn’t get by legislation he tried to achieve by executive order and Cabinet regulations.

The inmates were basically running the asylum. Unless we stopped them, we would all end up broke, pedaling rickshaws, freezing our butts off in unlit hovels, and cooking over smoky fires of dried buffalo poop. Global warming (a.k.a. climate-change) is the greatest hoax in history. It looked like it was going to be America’s suicide-pact. It had us by the throat, and Hillary Clinton was going to finish the job.

Fortunately, a kind Providence brought American voters to their senses before the whole thing went to hell in a hand-cart. In 2016 we elected a president who saw that the climate-madness had to be stopped if his vow to “make America great again” had any chance of being kept. He’s been undoing Obama’s executive orders and regulations that have hurt our industries and stalled the economy. The coal-industry is coming back from the dead. The booming shale-oil industry is redrawing the world-map of petroleum-production. And Mr. Trump has stopped American participation in the Paris Climate Accords.

Critics might claim that the Pohanka data (above) seem to vindicate the climate-change theory. Or they might say that those reports are outdated, and that current trends are different. But I would reiterate that “weather” is not “climate.” Those terms are now interchanged by reporters, pundits, politicians and even some scientists, but they are not the same thing. According to the Merriam-Webster Dictionary:

Weather = the state of the atmosphere at a place and time as regards heat, dryness, sunshine, wind, rain, etc.

Climate = the weather conditions prevailing in an area in general or over a long period.

Thus, weather is a component of climate, but climate is a larger concept. Climate in a locale can include a wide range of weather events over short time-spans, but those events don’t necessarily indicate that the climate is abruptly changing.

Climate can change, and has changed in some places, but only over long periods of time. Scientists argue over whether such change is actually occurring now, but the issue is far from “settled.” More to the point, there is no clear evidence that any human activity is causing the climate to change, if it is.

Sanity about climate, weather, and the economy has finally returned to at least some halls of government. We were trying to fight an economic war with one hand tied behind our back, while emerging economic powers like China ran rings around us. If Providence continues to smile, perhaps the final bell has rung on that lopsided contest before politicians’ dream turned into a national nightmare.

But with so much money at stake, the issue is not dead – it’s only sleeping. Advocates of radical environmental policies are on a “long march” – undoubtedly waiting for a more salubrious political climate to resume their war on the most successful economy in history.

Then, they’ll be baaaaack… 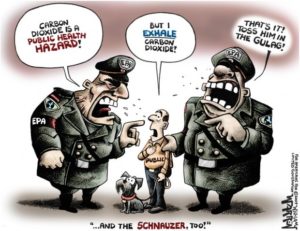 I happen to believe in man made global warming because I believe in science and data. By insisting that global warming is a hoax, conservatives lose credibility with the younger generation. However, having said this, i am not on board with the Left’s remedy to the problem.

Which science and data?

Like the RUSSIANS ARE HERE narrative, in a recent Gallup Poll global warming didn’t measure on the scale of issues that the public cared about.

I am now really proud of my country for the first time.