Kirby Delauter, a councilmember from across the Potomac in Frederick County, Maryland, is about to have his name go down in infamy.  If our next generation of politicians do not want to be Delautered, following a few simple rules may help. [read_more]

The Frederick News Post, apparently no bastion of conservatism, had published unfavorable articles about Kirby Delauter, a fiscal conservative, in the past election cycle.  In a Facebook message addressed to a reporter for the News Post, Delauter stated:

Use my name again unauthorized and you’ll be paying for an attorney.  Your rights stop where mine start 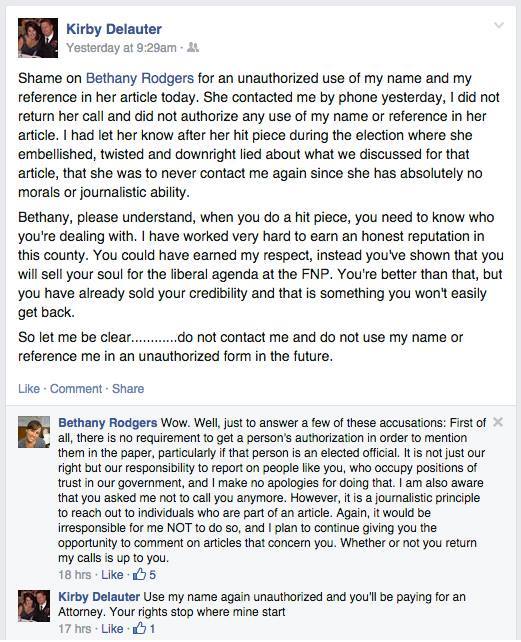 So dear reader, care to take a guess as to whether Delauter has a legal case?  Let’s just say I feel sorry for any attorney he consulted with for Delauter wasting their time.

Delauter’s good friends at the local paper responded on Tuesday January 6 with a mocking editorial containing such gems as:

OK, imagine we agreed because of temporary madness or something funny in the water that week, how would we reference “Kirby Delauter” and do our job as journalists without running afoul of our lack of authorization?…

Blanks? Sure, we sometimes use hyphens in the case of expletives. Perhaps we could do that: “K—- D——-.” Or, perhaps, “Councilman [Unauthorized].”…

Enough. Seriously. What’s Kirby Delauter going to do? Sue everyone who’s making fun of him on Twitter using the #kirbydelauter hashtag, or on Facebook? Boy, his attorney will be able to retire off that…

All Kirby Delauter is doing yet again is displaying his inability to control his temper, embarrassing himself, his district, the county and those who voted him into office. If he wants to govern like a taxpayer, he needs to respect the taxpayers whose money provides his paycheck, stop this silly, inflammatory nonsense, and get to work.

The world piles on

Delauter then became inundated with Tweets with the hashtag #KirbyDelauter representing thousands of individual instances of unauthorized use of his name.  Delauter has made a name for himself very quickly, and this could have been avoided.

So what lesson is to be learned?

Contrary to the claims of the Frederick News Post, the liberal media IS out to get conservatives.  In fact, their denial of this, is one more example of how they denigrate and demean conservatives.

…ignorance of what journalism is and does is no joke, and illustrates one disturbing aspect too prevalent in conservatives’ beliefs: That the media are all-liberal stooges hell bent on pursuing some fictional leftwing agenda.

But, this could all be avoided if our politicians followed a few simple rules:

Follow these simple words of advice and you too may avoid being Delautered.

This guy is a genius. He’s got everybody knowing his name. You can’t buy this kind of earned media.

Leave Kirby alone. He’s already apologized about this and I’m sure we won’t see any media outlets reporting on his apology!!!

Thanks for the needed comic relief. For more chuckles, check out the Twitter hashtag #KirbyDelauter – https://twitter.com/search?q=%23KirbyDelauter&src=tyah

Ah yes….now we have a name for a conservative that, despite all his or her pleadings and arguments about how conservative they are, how much they LOVE the U.S. Constitution, they seem to not like anyone else’s rights or freedoms, like speech – especially when it doesn’t jive with their world view. These people, they should be called Delauters.

In a historical era unprecedented by elected officials in both parties clearly indistinguishable from the dimmest of bulbs he is cutting new trail. My congratulations to “???????????????”, what was his name again?