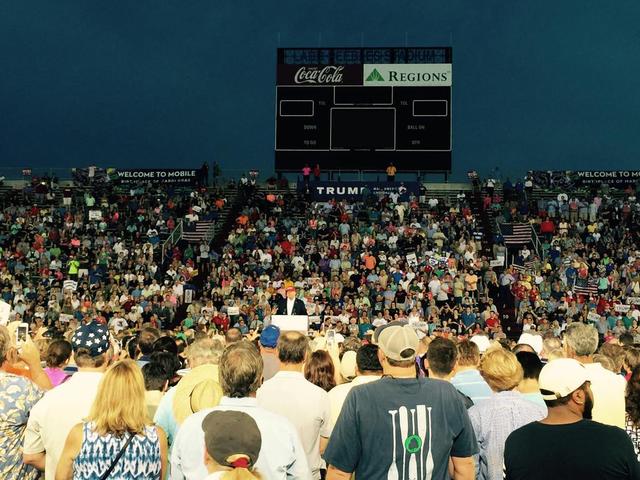 Using Donald Trump’s appearance at a rally in Mobile, Alabama on Friday as his launching point, Politico’s Ben Schreckinger draws an equivalence between Trump’s lead in polls of certain southern states and the 1968 third-party candidacy of former Alabama Governor George Wallace.

In 1968, this third-party candidacy robbed the Democratic nominee, Hubert Humphrey, of support from the “Solid South,” where Wallace won 5 states.  Schreckinger says Trump’s trajectory could do the same thing next year:

Wallace, an avowed segregationist, was the last presidential candidate to win electoral votes as a third-party candidate. The threat of Trump doing so, propelled by a hardline immigration stance that many have condemned as racist, looms over the Republican Party now as it did over the Democratic Party then…

The author offers zero factual support for this stunning display of moral incoherence, beyond pointing out that Trump has touted his leads in southern polls (never mind that he leads virtually everywhere else, too) and that “many” have condemned his immigration stances as “racist.”

Is this article unfair?  You bet it is.  But get used to it.

If you’re Trump, it’s all good.  For him, it’s not what they’re saying about him (or whether it’s good or bad for him, the Republican Party, or the country).  The important thing is just that they’re talking ABOUT HIM. That’s all that really matters to the GOP’s own P.T. Barnum.

For the rest of us?  Not so much.  The longer Trump remains on top, the more the media will use him and his simplistic bombast as a wedge in just this way.  And if actual conservatives are too cowed by the PC police to even have a real conversation about immigration—the primary engine of Trump’s campaign—Trump is going to remain on top for some time to come.

Folks, Trump’s rise is a direct consequence of leaders in both parties having failed to act reasonably and in the country’s interests on immigration, for decades.  Reasonable debate is always silenced with the shrill intonation of “racism!”  When reasonable debate is stifled, only unreasonable people remain to carry it on.  That’s the void Trump is filling, and for as long as Trump is the flag bearer for stricter border controls, that cause will actually suffer.  He may lead the currently highly-fractured field, but he does not lead the Republican Party (how could he when he’s been on the liberal side of virtually every issue, and coordinated with the Clintons before he decided to run?).  And, more importantly, he has engendered very strong feelings from the rest of the electorate, a stunning 59% of which regards him unfavorably.

I’ve eaten my words on Trump before.  I thought he was a flash in the pan, like Herman Cain four years ago.  I see now that I underestimated him, and the frustration of much of the Republican electorate toward what Carly Fiorina calls, “the professional political class” and what Ted Cruz dubs the “Washington cartel.”  Let’s hope that they, or Walker, Paul, Rubio, or one of the other conservatives can actually be the vehicle for stopping him.