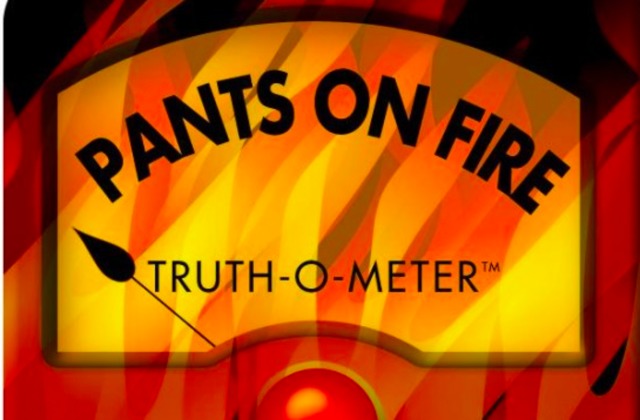 Politifact, which refers to itself as the “truth meter” for all things political in Washington DC and Barack Obama’s 57 United States, showed this past weekend just how partisan they really are.  Senator Rick Scott of Florida made a speech in which he pointed out that in Alexandria Ocasio-Cortez’s New Green Deal, that air travel would be eliminated within 10 years and replaced with high-speed rail.  Politifact has called Mr. Scott’s speech “false” saying that nowhere does the Green New Deal calls for the elimination of air traffic. Read here.

Problem is that Alexandria Ocasio Cortez has herself called for the elimination of air travel on her own website, and then removed the document showing that she supported the elimination of airplanes.  It should be stated that AOC only removed this document after receiving a tremendous amount of blowback from her fellow legislators.  In typical liberal fashion, her office tried to blame the GOP for the release of the statement before accepting the blame themselves.

Now Politifact hints at this – but everyone in journalism knows that most people only pay attention to headlines and seldom read the meat of a story.  So Politifact is playing loose with the facts here. And the facts are as follows: AOC is one of the authors if the Green New Deal.  AOC would like to ban air travel. The GND will offer free money to anyone who is unwilling to work.  To fully implement the GND, it will cost upwards of 93 trillion dollars to rebuild or retrofit every structure in the USA.  And while the GND does not specifically call for killing off cows, there is little doubt that the environmental Nazi’s would want us to eat a lot less meat and eat mostly a vegan diet.  AOC says so herself, and is praised for this in an Environmentalist Wacko blog.

And remember that Cory Booker is a vegan.

One thing that should be mentioned here, that no one has ever really thought about, is the fact that vegans like Cory Booker and the environmentalist wacko movement truly despise Hindus. Hindu people, who are a rising force in NOVA politics, believe that cows are sacred. As a Christian, I can not accept this belief, but as a man who supports someone’s right to worship as they see fit, I must respect their rights.  Hindus believe that cows are sacred. And if the environmentalist wacko’s such as AOC and Cory Booker are allowed to have their way, they would like to see no cattle in our country. Aka they would be killing off Hindu relics in the name of environmentalism and animal rights.  Not very respecting of Hindu beliefs are the environmentalist wackos huh? This from the group that calls for diversity at all levels of society.

Nice try Politifact – but you’ve been exposed as being nothing more than partisan hacks.