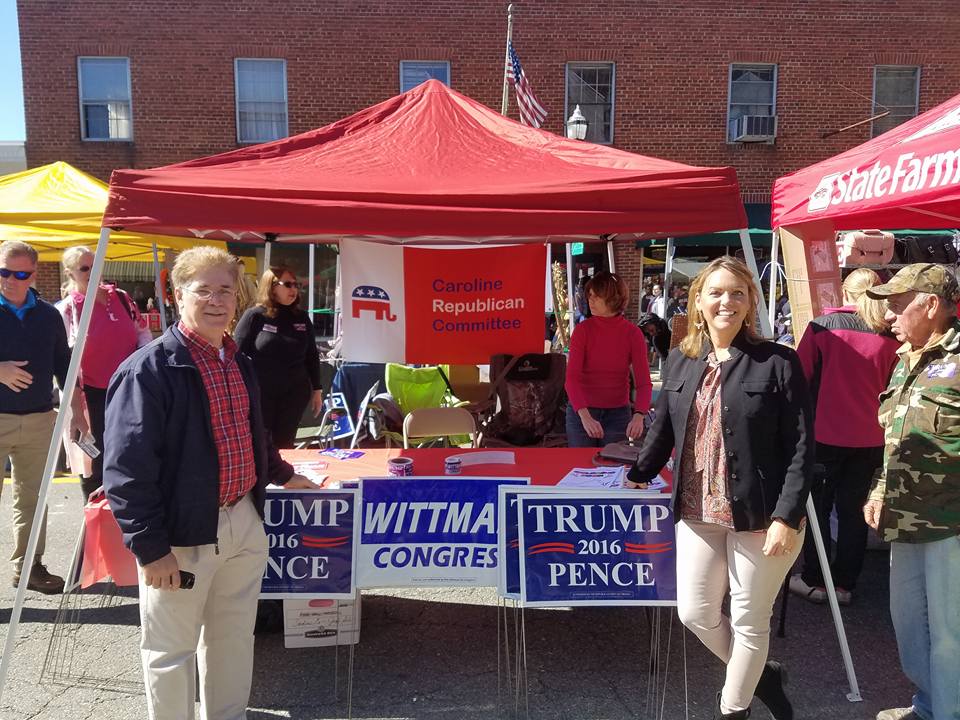 Polls Don’t Reflect What I See on the Ground

Yesterday, I helped man my Caroline County GOP committee’s booth at the Harvest Festival in Bowling Green, Va. There were tens of thousands of people in town and it was one of the most interesting festivals I’ve been to in Virginia. What astonished me was that 95 out of 100 people at that fair were rabid Trump supporters.

Jeff Sili, our committee Chairman, brought about a hundred yard signs, which were gone in an hour. Virginia Delegate Margaret Ransone showed up and saved the day with another hundred signs or so. We were handing them out as fast as we could put them together. Thousands of people walking around the festival were carrying Trump/Pence yard signs and bumper stickers, or wearing Trump lapel stickers. One gentlemen was looking for a Trump button. We didn’t have any, so I gave him the one I was wearing.

Usually, when I run booths at fairs or events, I’m always walking around my table, looking for people to talk to, to draw into conversation. Yesterday, I was able to sit behind a table as thousands stopped at our GOP Committee booth to tell us that they were voting for Trump and how much they loved Trump; how furious they were with the establishments and how much they despised Hillary.

I had at least a dozen independents ask me to help them find a rationale to vote for Donald Trump, after the video made him seem so creepy. They recognized that Hillary Clinton is a greater evil and were looking for any rationalization or justification to pull the lever for Trump to save the country from Clinton. All I could tell them is to ignore all the campaign promises they’ve heard and to decide whether they want Donald Trump or Hillary Clinton in charge of our military and foreign policy, of our federal departments and bureaucracy, and of appointments for federal departments and courts.

I look at the polls and it is clear that Donald Trump is going to lose, though I do not believe he’ll lose as badly as the polls predict. However, in rural America – people are fed up with their government. They want to be proud of their country again. They want good jobs again. They want an American culture to rise from the ashes of multiculturalism and to resonate with all the wonderful immigrants, fleeing their old countries and cultures, as they enter the gates of that shining city on a hill.

Unfortunately, it would appear as if our cities and the sheer number of government employees, subsidy recipients and city dwellers out number what appears to be a large and struggling minority of patriotic, red-blooded Americans. Or else, the polls are wrong.

We are witnessing a great cultural upheaval in America that will not end with this election. It would behoove the Republican Party to reach out to these Americans and to offer them real, meaningful, change. Cut through their prejudices and anger with an optimistic, pro-American agenda. We must overlook much of the ignorance in this country and, instead of despising the American People for failing to understand how governments and economies work, seek to explain to them the realities of the system and to let them know what they can do to help make America great again.

We can save this country, but first we must recognize that, as a party, we’ve long since abandoned “the people”. We no longer reach out to them and include them in our politics; depending, instead, on campaign advertisements and divisiveness to turn our supporters out to the polls. That has got to stop. We need to recommit ourselves to working directly with the people of this country and to offering them real change through meaningful legislation and public policy.