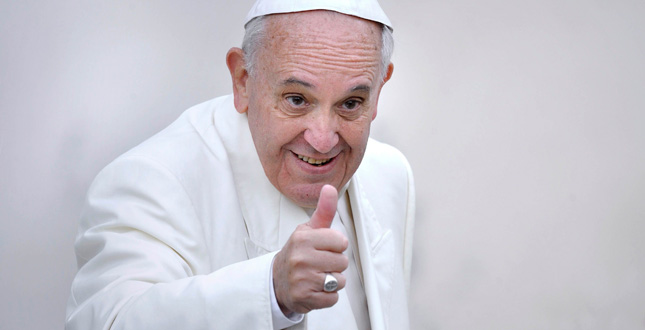 For the unborn, the poor, the rich, and the condemned equally, it is a church of sacrifice, of the Golden Rule, and of a unity of spirit.

In other words, the exact opposite of American politics.

Watching every level of commentary from Facebook posts, blog posts, news stories, and television coverage has been incredibly frustrating for me. Though the Pope himself has powerfully sought to disassociate his causes from the grimy politics of today, both the right and the left of this country have sought to claim him (and condemn him) while willfully ignoring the history and message of the Church.

Pope Francis calls for compassion for immigrants, mercy for the poor, and respect for human life from natural beginning to natural end. Â These are thingsÂ the Church has always stood for. I was taught these values by the Benedictine monks at The Portsmouth Abbey School whence I graduated in 1999.

The right attacks the Pope as some Peronist socialist while the left embraces his call for immigration reform and climate change. Yet, willfully ignored by the left and embraced by the right is the Popeâ€™s steadfast belief in the right to life and the institution of traditional marriage, views the right are increasingly frustrated that the American media will not cover with the same breathless enthusiasm as climate change, economic inequality, and immigration.

The fact is the Catholic Church does not fit the current divides in American politics. What is frustrating is watching people breathlessly embrace The Peopleâ€™s Popeâ€™s message, but only the parts that make them feel good.

The Church has never changed in its doctrine and I have found myself quite frustrated with the embrace of Francis while ignoring the fact that he isnâ€™t any different from previous Popes, and in fact Francis is perhaps the Churchâ€™s best messengers of its true faith since the early papacy of John Paul II.

Francis is neither a liberal nor a conservative. He is not Obamaâ€™s Pope. He is still Jorge Mario Bergoglio, a Catholic priest serving the souls of his pastoral mission. American politicians’ continued failure to understand this also constitutes aÂ failure to understand the Church. Pope Francis isnâ€™t in America to fight for anything more than the salvation of all souls. Picking and choosing his views for our own political purposes continues this countryâ€™s failure to fully understand Catholicism.

His views donâ€™t come from politics, it comes from his core mission of bringing salvation to our souls and ensuring our rise to Heaven. He doesnâ€™t want to solve income inequality to help elect Bernie Sanders or Elizabeth Warren any more than he wants to protect the unborn to lift up the careers of Ted Cruz or Ben Carson. He is seeking to save souls and bring salvation to all.

The Pope is not an American politician and for those attempting to pigeonhole his (and the Churchâ€™s) views in that dichotomy are doing him a disservice. The Church has never changed, and I encourage anyone who finds his message appealing to look up Mass times of their local parish this Sunday and see that Pope Francisâ€™s message isnâ€™t unique inÂ the Catholic Church.

It IS the Catholic Church.

Well the American priests sure broke out the bling for his tour. What ever happened to that idea of taking a vow of poverty and serving the poor?

In fact, I haven’t seen a poor priest in at least 40 years. Seen plenty of poor nuns, but not priests.

This pope is a socialist who bashes capitalism and the free market, embraces the fraud of man-made global warming a.k.a. climate change, and wants big-government redistribution of wealth. And don’t tell this life-long Catholic gal his words are misrepresented by the media, I’ve read his words (official translation) off the Vatican website.

He personifies “our Mother Earth”?!? What kind of pagan Gaia crap is that?!!

For shame, Pope Francis! You have the opportunity to do some real good here and yet you are catering to your leftist leanings.

You should try the Latvian Orthodox Church. They have nice hats.

Listen to AM radio much do ya?

The big story is how the Republican’s threw the Constitution under the bus regarding the separation of church and state.

Constitution – church state? Can’t seem to find that in mine. I take it you’re not familiar with the constitution as well as actual issues.

Yea, talk to SCOTUS it.

The church has changed. Vatican II was significant in that regard – in changing. Galileo wouldn’t have to recant these days, etc. What the Roman Catholic church says – changes.

The three great pillars of Catholic Social Teaching are solidarity (we are our brother’s keeper), subsidiarity (it is best to organize and solve problems at the community level rather than relying on a removed, centralized bureaucracy), and distributism (the means of production should be spread as widely as possible, rather than being centralized under the control of the state, or a few individuals or corporations). Catholic social teaching is neither liberal or conservative – it is Catholic, which is what is driving Limbaugh, Levin, and Savage (none of whom are Catholic) up the wall. Well, one cannot always agree with one’s friends, can one?

The Pope speaking about “climate change” does not make it a real thing. Pushing that crap is actually harmful. The criticism is real and valid, just on this issue alone.