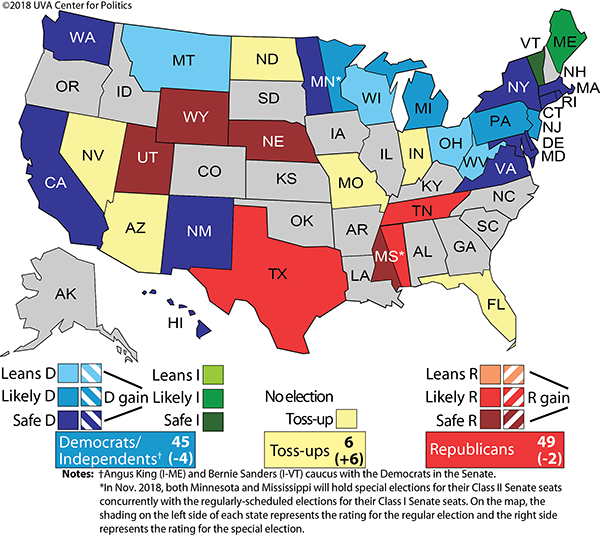 Predictions by state for Senate 2018

Larry Sabato of the University of Virginia Center for Politics has released his predictions for this year’s Senate races.  Be aware that Sabato is very much a Democrat so his predictions tend to lean a bit to the left.

It’s hard to believe that Virginia is more Blue than New Jersey!  Have voters in Virginia forgotten that Tim Kaine was Hillary’s running mate?  What’s he ever done for Virginia?

Democrats must defend 24 senate seats while Republicans defend only 9 and Independents have 2 seats to defend. 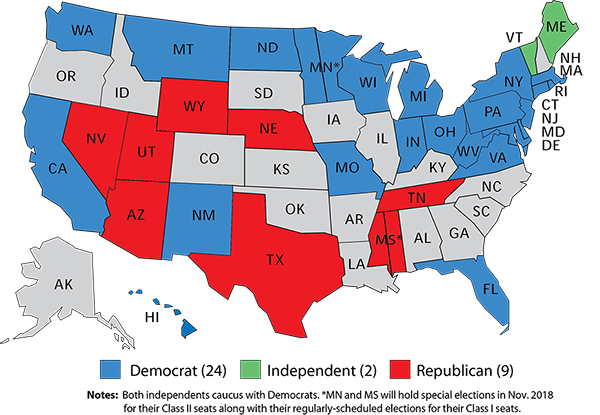 Of course there will be surprises in November, there always are.  Much depends on the popularity of President Trump at that time and the Democrats’ anger motivating their turnout.  How long can they stay so angry?

Predictions by state for Senate 2018 was last modified: March 24th, 2018 by Jeanine Martin

Now remember I am dumb as a box of rocks.
Just what is Senator Kaine to do for Va?
Before you answer I will hold a Va Republican Senator to the same standard.
Is he to bring home wasteful temporary spending projects home?

Now let’s jump to the bottom of the page.
404,000.00 uh for what?
Isn’t there a younger cheaper model to replace Sabato? Uh, States Rights the right to cut this kind of pay put of our budget, $7.50 per houra

Half a billion dollars for Planned Parenthood. Half a billion.
No borders wall. No immigration enforcement.
Gun control.
Schumer and Pelosi celebrating.

Remind me why I should bother voting Republican in November?

Really, I second that last thought. No reason to vote for the GOP in the future

Despite some wobbles along the way, we’ve favored Hillary Clinton as the 45th president of the United States ever since we did our first handicapping of the Clinton vs. Donald Trump matchup back in late March. The edge we had for her back then has eroded a little bit at the end — we had her as high as 352 electoral votes, and in the final tally we have her down to 322, with 216 for Trump. If this is how it turns out, Trump will fare 10 electoral votes better than Mitt Romney, and Clinton will do 10 electoral votes worse than Barack Obama in 2012 — 11 or 12 if rogue Washington electors follow through on their threat to refuse to vote for Clinton (but we can’t assume that at this time).

Those kids at UVA are wasting their tuition money on this guy.

I see Montana and West Virginia as more tossups (as long as Republicans do not nominate Blankenship in WV).

I asked him directly once why his polling data models seemed always so Democratic skewed? He was immediately angry, stated I didn’t know what I was talking about as he wasn’t a pollster in the first place but rather a “political analyst” I replied that I understood now and amended my question as to why he actually used “others” skewed Democratic polling data to make his “political analyst” predictions? Seeing his deflection didn’t create the expected results I was promptly dismissed. So I have always concluded that Sabato’s crystal ball predictions were manufactured on polling data he claimed no responsibility for and a polling vendor inclusion select process he wouldn’t explain or defend. The word that comes to mind when I see him in print is poser or perhaps less kind charlatan.

I’m still waiting for Kaine to be connected to ALL the corruption and deceit the Clinton campaign engaged in. He HAD to be involved. He HAD to know something. He HAD to have lied. He’s been very quiet lately…hoping it all to pass. Let’s not let that happen.

BINGO! We already suspect that the Obama a dministration spied on political opponents. They certainly spied on the Trump campaign. Wouldn’t Tim Kaine and Hillary Clinton be prime consumers of the political intelligence collected? The RTD will never ask Tim Kaine about this! I doubt the feckless RPVA will ask him. Our senate candidates should bring this up at every opportunity.

As the investigation into the Obama administration unfolds, we may learn the truth – maybe even before the fall election. But let’s not wait – get Tim Kaine on the record now. What do you think the democrats would be doing right now if the roles were reversed?

You won’t hear jack, why. the GOP is to stupid to use information like that

If that’s the best you’ve got, he’s a shoe-in. Inference, supposition trafficking as proof and evidence! Why I’d think you were a liberal snowflake so little is there behind the argument.