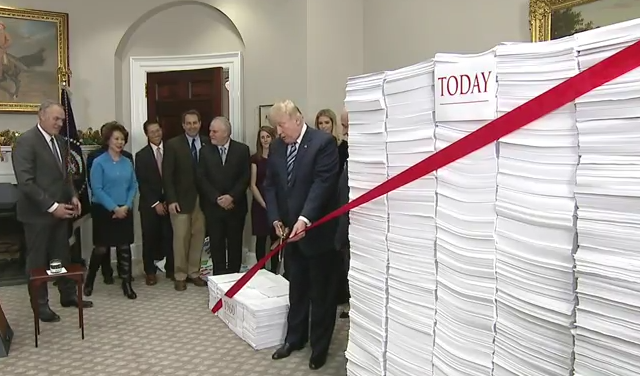 Little by little, President Trump has made the lives of people across the country less difficult by curtailing the intrusiveness of the federal government. Trump has instituted regulatory reform, unlike anything we have seen in past administrations in order to restore freedoms and economic opportunity to the American people. In his first year in office, Trump has led his administration through an unprecedented deregulation process which will limit the power of the federal government far into the future.

Before the end of his first month in office, President Trump issued an executive order vowing that for every new regulation written into the books, two regulations needed to be removed. Since then, executive agencies have more than surpassed this goal.

The White House announced in a mid-December report that agencies have issued 22 deregulations for every new regulation imposed, accounting for $8.1 billion in lifetime net regulatory cost savings or the equivalent of $570 million per year.

President Trump has also worked alongside Congress to sign off on 14 Congressional Review Act rescissions that eliminated wasteful and burdensome regulations imposed by the Obama Administration.

Among these include the Stream Protection Rule, which impacted coal plants across the country. The rule itself had an estimated compliance cost of $52 million per year, but the Chamber of Commerce found the estimate severely underestimated. The regulation slowed the permitting process for energy and infrastructure projects which the Department of Interior did not address in their analysis of the plan, nor did they address the increased probability of permit denials or the compounded impact of this rule among others.

Agencies have been blindly imposing regulations without proper awareness of their effects.

CRA rescissions have touched the heart of Obama overreach in nearly every agency. With the passage of H.J. Res. 57, state governments retrieved control over their education plans and student accountability standards. With the passage of H.J. Res. 40 additional background checks on Social Security recipients for gun ownership are no longer required.  NPR of Feb. 2017 estimated this regulation would prevent about 75,000 people found mentally incapable of managing their own finances from purchasing a gun.

These are only some of the dozens of examples of federal government overreach which have been eliminated by the Trump Administration.

President Trump has also rescinded key areas of overreach by President Obama and the Environmental Protection Agency (EPA). During Obama’s term, the EPA used the vague language of the Clean Water Act to issue rules which implemented sweeping regulations of small waterways on private property and providing them with control over millions of acres of private land, while imposing regulatory burdens on farmers, home-builders, contractors, foresters and small towns without considering the side effects.

The EPA’s own figures estimated this would cost between $158 million and $465 million a year. Meanwhile, a report from the US Chamber of Commerce concludes, this is a gross underestimation of the costs because the EPA did not gather feedback from small businesses and communities who would be affected by the regulation.

Not only did Trump rescind the Waters of the US rule, which allowed this to occur, but EPA director Scott Pruitt has led reforms within the agency to prevent this from being a possibility in the future.

With a directive Pruitt signed in November, the EPA can no longer expand their regulatory power through sue and settle lawsuits, instead being forced to engage in transparency and public participation. As Pruitt explained in a July 2015 speech on the House floor, “Between 2009 and 2012, the EPA chose not to defend itself in over 60 of these lawsuits from special interest advocacy groups. Those 60 lawsuits resulted in settlement agreements and the EPA’s issuing more than 100 new regulations.”

Even this was only the beginning, the Chamber of Commerce predicts the EPA’s climate change initiatives places a $50 billion regulatory burden on the US each year.

Pruitt’s new directive forbids the EPA from entering into these agreements and requires sufficient time to issue or modify proposed final rules, in this time the Agency is required to reach out to any state or regulated entity affected by the potential settlement or consent decree before it is finalized. Finally, the EPA is forced to understand the consequences of their regulations before they are implemented.

Pruitt has also removed the New Source Review regulation which requires a “second guess” of companies estimates for future pollution levels, placing additional burdens on companies who have already complied with EPA demands. This has stifled the development of new power plants, weakening U.S. energy security.

With his proposed repeal of the Clean Power Plan (CPP), President Trump has continued the agenda of putting American energy first. As Pruitt explains, “The CPP ignored states’ concerns and eroded longstanding and important partnerships that are a necessary part of achieving positive environmental outcomes. We can now assess whether further regulatory action is warranted; and, if so, what is the most appropriate path forward, consistent with the Clean Air Act and principles of cooperative federalism.”

The Trump Administration has removed regulatory burdens from nearly every aspect of the American people’s lives. While the Obama Administration quietly expanded the impact of the federal government through vague policy and executive orders, Trump has worked with Congress and his own agencies to remove these impositions from the America people’s daily lives, truly proving he is prepared to spend the rest of his term making America great again.