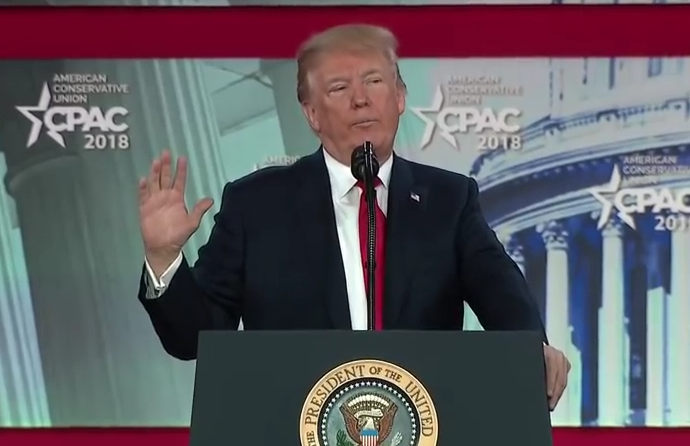 President Trump might be the most conservative president in our lifetime

On Feb. 23, President Donald Trump spoke at the Conservative Political Action Conference (CPAC) for the second year in a row as president, after not attending in 2016 during the campaign. At the time, he was still busy building his constituency in the Republican primary and for the general election, where he would ultimately prevail on a very conservative platform of putting America and the American people first in governing.

Now, Trump is the leader of the conservative, center-right party in the U.S. and of the executive branch. After one year in office, he has a record he has delivered on: lower taxes, fewer regulations and an opening the doors for economic expansion. ANWR has been opened for drilling. The Keystone XL pipeline is being built. The Obamacare individual mandate has been repealed.

Trump pulled the U.S. out of the Paris climate accord. He ended the so-called Clean Power Plan. He withdrew from the Trans-Pacific Partnership and is looking to revamp NAFTA or else pull out of that one, too. Trump ran on fair and reciprocal trade, and that’s what he’s delivering. At CPAC, Trump declared, “the era of economic surrender is over.”

By enforcing trade agreements through the exercise of the President’s power over foreign relations, Trump is enforcing what are essentially contracts. Ignoring the terms of contracts, and allowing trade partners to cheat, is not conservative. It is corrupt.

Where one might quibble about Congress’ spending record in Washington, D.C., there is a president who is getting what he can done on behalf of the American people who elected him. He set a priority to rebuild the military and put the nation’s security first. Agree or disagree with the simultaneous increase of domestic spending — Trump’s own budget called for $4.5 trillion of spending cuts over 10 years while simultaneously increasing military spending — Trump made his promise on behalf of the nation’s fighting men and women, and like Reagan before him, he’s keeping it.

Trump is handing matters back to Congress and not ruling by edict. For example, agree or disagree with Trump’s decision to put DACA back onto Congress, pass or fail, that’s where the matter belongs. In the process, he is using his decision to end DACA in March as leverage, to fight for an end to extended family chain migration and the visa lottery, moving to a more merit-based model of economic priority.

President Trump is restoring limited government. And he’s doing it despite all expectations from the pathetic #NeverTrump in 2016 that said he was no conservative. He may be the most conservative president in our lifetime.

Trump has. In spades. He put Neil Gorsuch on the Supreme Court and has put 13 constitutionalist judges on the federal circuit courts and another 10 on the district courts. Another 58 are awaiting confirmation.

Trump is restoring the rule of law, cracking down on violent illegal alien offenders, gangs and ending the war on police. He’s building the wall. He has made the opioid crisis front and center, and continues his focus on securing the nation’s borders.

Trump is taking on a rogue administrative state that thinks it is the legitimate government, including deep state actors who would seek to overturn the result of the 2016 election with false claims of the Russia treason plot. It’s hard to imagine anyone else collapsing under that pressure, but not Trump. He is fighting to preserve the institution of the presidency in Article II of the Constitution from an illegitimate threat to the consent of the governed.

In the wake of the mass shooting in Parkland, the President called for self-defense not gun control. Let gun-owners carry, and shooter will think twice.

Trump recognized Jerusalem is the capital of Israel, something no other president had done.

Trump even took on some issues outside the governmental arena, including respect for the American flag and the National Anthem, demonstrating conservative leadership in a cultural area such as professional sports — and winning.

Trump has a record he can defend. A conservative one. In 2020, it may be enough to win reelection.

But in 2018, the President realizes there are other forces at play. In uncharacteristically frank remarks on the prospects of the midterm elections, Trump noted, “And now only two years — that’s a very short period. And by the time you start campaigning, it’s a year. And now you got to go and fight again. But you just won. So nobody has that same drive that they had. So you end up not doing that well because the other side is going — they’re crazed.” 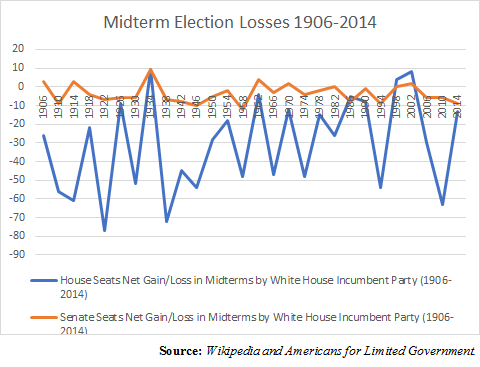 So, what to do? Trump had some words of advice for his supporters at CPAC, warning, “Don’t be complacent… The fact is, we need more Republicans to vote.  We want to get our agenda.” He’s right. But to rally in 2018, the President needs to get the wind at his back. So far, he’s off to a good start, with his tax cut plan now in effect, a rousing State of the Union Address and now his CPAC heart to heart with his supporters.

Midterms are by no means determinative of presidential reelections. Former Presidents Clinton and Obama rebounded after catastrophic losses in Congress. But they can help. Reagan kept a Republican Senate majority in 1982 and went on to one of the largest landslides in electoral history in 1984. Nothing is set in stone, but for President Trump to continue implementing his conservative agenda in Washington, D.C., one fact is unmistakable: he needs a conservative, limited government majority in Congress.

President Trump might be the most conservative president in our lifetime was last modified: February 26th, 2018 by Guest Contributor Robert Romano
2018conservativeCPACTrump
22 comments