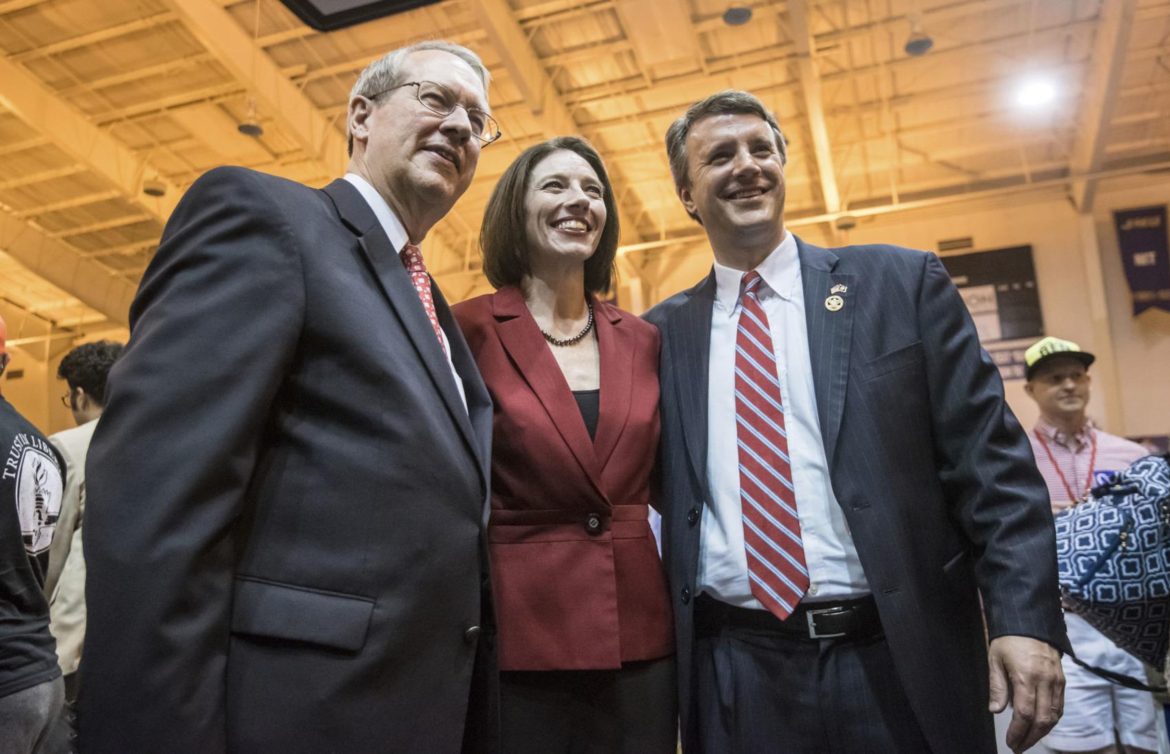 Press Release following the Appeals hearing in the 6th District

From Ken Adams, Chairman of the Waynesboro Republican Committee and

The 6th District Republican Committee upheld its decision to retain the Bopp Law Firm to defend the Committee and its current and former officers.

The charges against the Committee and its officers are frivolous. That said, any federal investigation is serious, and the Committee deserves a vigorous defense, both to protect it from legal liability and to protect the reputations of all of its members.

In light of this, the Committee voted at its June 23, 2018 meeting to retain the Bopp Law Firm, a nationally prominent law firm with particular expertise in election law, to defend it and its members. The Committee constituted a sub-committee to manage the litigation on its behalf. Finally, the Committee allocated up to $30,000 for legal fees.

The Committee’s decision to retain the Bopp Law Firm was appealed on two grounds. The first ground was that one of the proxies used to vote at the June 23, 2018 meeting was invalid, and as a result the Committee did not have the votes to approve the creation of the sub-committee by the 3/5 margin required by its Bylaws. The second ground was that the Bopp Law Firm is subject to a conflict of interest based on the American Bar Association’s Professional Rules of Conduct, and therefore may not represent the Committee.

On the second ground, the Committee considered a legal opinion prepared by the Bopp Law Firm, a copy of which is attached. The document sets forth the legal standard for conflicts of interest and which determined that there is no current or likely future conflict of interest between the Committee and its officers.

Accordingly, the Committee denied the appeal which challenged the motion to appoint a Special Counsel, affirming that the 3/5 vote requirement had been met and that no conflict of interest existed under the Professional Rules of Conduct of attorneys. Thus, the Bopp Law Firm continues to represent the Committee and will be submitting the Committee’s responses to the FEC allegations by July 16th.

There has been much confusion about the Committee’s decision to retain the Bopp Law Firm. The following questions have been posed, in social media and elsewhere, and the answers below should help to dispel any confusion.

It was reported on social media that the Committee was defending Cynthia Dunbar; is that true? That is not true. The motion by which the Committee retained the Bopp Law Firm explicitly states that the Committee is retaining the firm for the purpose of representing itself and its officers and no one else. A copy of the motion is attached. This confusion presumably arose because the Bopp Law Firm also is representing Cynthia Dunbar and former chairman Scott Sayre in their individual capacities. However, that is a different representation, with distinct clients and related to a different complaint.

People are saying on social media that the Committee and its officers are guilty; is that true? That also is not true. As the attached assessment from the General Counsel of the Republican Party of Virginia argues that the allegations against the Committee are dubious. Moreover, the allegations are of a highly technical nature and involve very small sums of money and, as a result, even if the Committee and its officers committed technical violations, they likely do not rise to a level that will lead to any enforcement action by the FEC.

If the charges are so thin, why does the Committee need lawyers? A party named in an FEC complaint is entitled to legal counsel.  Moreover, due to the arcane nature of election law, it would be irresponsible – indeed, a breach of their fiduciary duties to the Committee – if the members of the Committee did not retain qualified legal counsel to assess and respond to the allegations. We have an adversarial legal system, which means that all parties are obliged to protect their own interests in a legal proceeding, and the Committee is committed to doing exactly that.

Isn’t it unusual for the Committee to defend its officers? To the contrary, it is the normal course of action for a committee (or other board) to defend its officers for allegations related to their official duties. The FEC itself recognizes this; in its Guidebook for Complainants and Respondents on the FEC Enforcement Process the FEC states that “Where the respondent is a political committee, the designation of counsel also covers the treasurer in his or her official capacity unless the respondent specifies otherwise.” In other words, the FEC itself presumes that counsel for a Committee also serves as counsel for its treasurer, unless the Committee explicitly states otherwise.

If the charges are so thin, why did the Committee allocate money for legal fees? When entering into a legal process, it is necessary to be ready to carry that process all the way to its conclusion. That is only fair to the Committee, the officers, and the Bopp Law Firm, which has a national reputation and is committing itself to this case. That said, we hope and even expect that the Committee and its officers will be vindicated quickly, and without the need for extensive administrative proceedings or litigation. In which case, we expect that some portion of the funds that have been committed to this effort will be re-directed toward the work of the Committee, such as building the Party and supporting its candidates.

Leave it to former Dunbar supporters to screw up and try to hide in in such dribble, it might as well be written in a crayon.

The answer is easy: each and everyone voting in favor of this is really a Democrat at heart. Expecting the party to pay special attorneys to help them, without even reasoning on what would make sense financially. “Spend, spend, spend… then claim it for a valid cause”.

All these losers sound Democrat to me, and I bet Hillary would be proud of their waste. Throw them out of the party with that Ahmed Massoud poop.

Has anyone seen the Newsletter Jennifer Brown issued today? Apparently it is full of half truths.

I’ve never heard of a committee budgeting money from the treasury to cover the legal defense of any individual. When the RPV eavesdropping scandal exploded in the summer of 2003 and as YRFV chairman I had a front row seat on that crazy train that ended saddling up Gary Thompson (former RPV Chair) with a misdemeanor and Ed Matricardi (former RPV E.D.) with a felony conviction. I can say with 100% certainty that not one penny of RPV money was allocated for anybody’s individual criminal defense.

This is my favorite soap opera right now.

Come in for the show, leave with a MAGA hat and elephant tie.

You know, the picture of the current Congressman, the next Congressman, and the Chairman of the District along with the article title: “Press Release following the Appeals Hearing in the 6th District,” kinda does a disservice to the reader.

Or if these guys are part of John’s independent group, they should get the ugly green grassroots logo.

Oh what a tangled web we weave …

Yes, can’t we all just get along?

Good compilation and thank you. The question has always been ” Is Ben Cline Complicit ” with the actions of Jennifer Brown and Roger to distract energy from his campaign with a very incompetent group of people and their continuing malicious actions? Unless he, as the 6th District Leader, steps in and makes her do her job, the activist energy should move to other fine candidates in need of support. Dave Brat, Denver Riggleman, and Corey Stewart among others will be great representatives of Virginia.

So this is the committee denying an appeal against themselves on the vote they took a couple of weeks ago?

Don’t do that. If you say his name three times he appears.

But Nixonante is our hero. After all he believes that everyone who has ever been accused of something must be guilty, facts be da00ed

It’s not the crime, it’s the cover-up.

In this case my dear Nixonante, there may be no crime, other than people potentially filing false complaints to alter the outcome of an election. We don’t know what occurred and did not occur, other than what are told from both sides.

So just the cover up then? What did you guys do at your district meetings when you weren’t hiring lawyers?

You, nor nobody on the committee thought to have proper disclosures on the web donation form?

Have you ever attended a Republican meeting/gathering/caucus/canasta game at the Sayres Offices? One, two, perhaps three? Any committee member on any side take calls there? Get mail there? Go for a smoke in the parking lot there?

Eh what? Move along, nothing to see here.

YOU know what occurred. How many law firms did you guys look at before you happened to pick the same one as ‘other parties.’ Which of your fellows advocated this course of action, which ones were NOT affiliated with ‘other parties.’

From my point of view, the crime was the damage to the brand of Republican for taking hard-won donations from people who VOLUNTARILY donated to the party for you to seize and ‘coordinate’ most-likely unnecessary legal defense funding… just in case right?

I fear you have become the very thing you were in politics to fight. What is it like on the inside of a swamp?

Wow Nixonante – the Gestapo or KGB would have loved you.

And you respond with Nazi/Fascist inferences… Remember what I said about you becoming what you were most against? Next thing I should expect would be seeing you at the homestead with a black balaclava and a bike lock???

I thought my questions were fair, you are on the 6th board right? You have been part of the workings of the 6th district, were you guys just not aware of party housekeeping matters??

I’d say the press release is missing some attachments.

I’d say the press release is missing a lot. But at least the gag order rammed through at the meeting is null and void…by the very people who pushed it through. I knew it wouldn’t take very long, but at least make it a challenge.

Also, Ken Adams and Matt Fitzgerald can speak for themselves – but as long as this motion is under appeal to SCC (which it was the second the vote was announced), they don’t speak for the Committee on this matter.

Sadly this press release raises more questions than it answers. I have numerous follow-ups and observations that I’d like to contribute, but I do try to keep my comments here to a minimum.