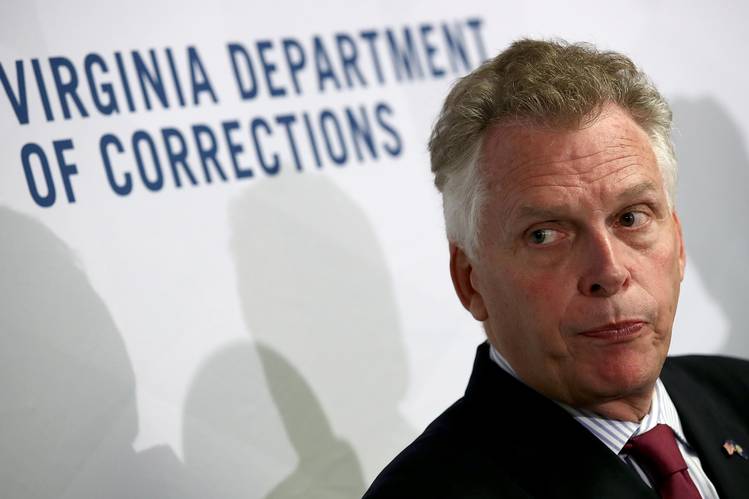 The Virginia Constitution prohibits a felon from voting “unless his civil rights have been restored by the Governor.” A separate provision gives the Governor the power to “remove political disabilities consequent upon conviction.” Restored rights include the right to vote and the right to sit on a jury, and past governors have used this power to restore rights on a case-by-case basis.  (McAuliffe himself has restored 18,000 felons this way.)

On April 22, McAuliffe issued an executive order to restore these jury and voting rights to every felon who had completed prison and any post-release supervision.  McAuliffe also promised to renew the order once a month for any newly qualifying felons. Because he treated all felons the same, the Governor didn’t make allowances for the violence of the offense, the number of offenses, or even whether an offender had paid his victim’s medical bills.

Those of us in the General Assembly saw this as unconstitutional overreach by the executive and decided to sue to block the order. We found two legislators and four Virginia voters who agreed to serve as petitioners. Because of the need for an immediate resolution of the issue, we filed directly in the Virginia Supreme Court, which set oral arguments for a special session on July 19.  If the Court rules in our favor, the blanket restoration would be invalidated, though McAuliffe would still have the authority to restore rights on a case-by-case basis.

After issuing his order, McAuliffe created a list of newly enfranchised felons for registrars.  However, reporters have found numerous errors in the list, including a murderer serving a life sentence, two fugitives who committed sex crimes against minors, and 132 sex offenders locked up in Virginia’s Nottoway rehab center. A FOIA request also proved that McAuliffe had given advance notice to Democratic voter drive groups, while keeping registrars and prosecutors in the dark.

McAuliffe has refused to release the list itself, though the FOIA Council recently determined that his refusal was improper.

The Constitution expressly prohibits a felon from voting unless “his” rights have been restored.  Every prior Governor has interpreted this to mean that restoration can only occur after individualized review, and legal advisors to Governor Kaine and Governor McDonnell explicitly rejected the constitutionality of a blanket restoration.

Attorney General Herring argues that the Constitution grants the Governor the power to restore rights, and it is up to the Governor to decide whether, when, and how to grant clemency. Herring also encourages the Court to dismiss the suit on procedural grounds.

What ought to happen?

First, the Court should take this case and resolve the issue.  While a court can often find procedural excuses to avoid ruling, Virginia has pending jury cases (including a death penalty case) and the coming 2016 election. Virginia needs to know – right now – if McAuliffe’s order is Constitutional.

Second, the Court ought to rule in our favor.  When considering how to apply two constitutional provisions, the Supreme Court is obliged to give both of them meaning and force.  Under its own rules, the Court should not adopt an interpretation that would eliminate part of the Constitution. McAuliffe is trying to restore all the felons’ rights, both in the past and into the future. To allow his blanket restoration would enable the Governor to ignore the felon voting prohibition altogether and effectively rewrite the Constitution.

We accept that the Governor does have the power to restore, but recognize that the Constitution also has the general prohibition against felons voting.  The best way to give meaning and force to both these provisions is for the Court to allow restoration, but only on a case-by-case basis. Such a ruling would prevent unconstitutional overreach while preserving the Governor’s clemency power.  As we say in our brief, “Governor McAuliffe is entitled to disagree with the policies of Virginia’s Constitution, but he is not entitled to nullify those he dislikes.” You can read the brief, here.

Join Us At the Court For the Argument!

We will be at the Court early, but the oral argument is scheduled for 9:00 a.m. on July 19, and the public is welcome. Given the importance of the Constitutional issues in this case, we anticipate a big crowd.  The Court is 100 North Ninth Street, in Richmond, just down the street from the Capitol. Hope to see you there!

Even if you do win (and that’s highly doubtful), you still lose once McAuliffe pushes the button on a mail merge program and an Autopen.

He beat you. He beat you in a typical McAuliffe slimy way (just like the concealed weapons issue), but he beat you. Again.

Analyzing why you missed all of those signs would be a much better use of your time, as you might learn how not to get beat the next time. And as long as McAuliffe is in office, there’s going to be a next time.

I wouldn’t be so complimentary of McAuliffe — he’s had big losses too, and I don’t think Virginia benefits when the officials in the legis & exec branches of government focus on partisanship rather than good governance (as both the GA Republicans and the Governor have been doing). But I agree that this one seems likely to be a McAuliffe win, one way or another.

Did the felons complete their sentences?