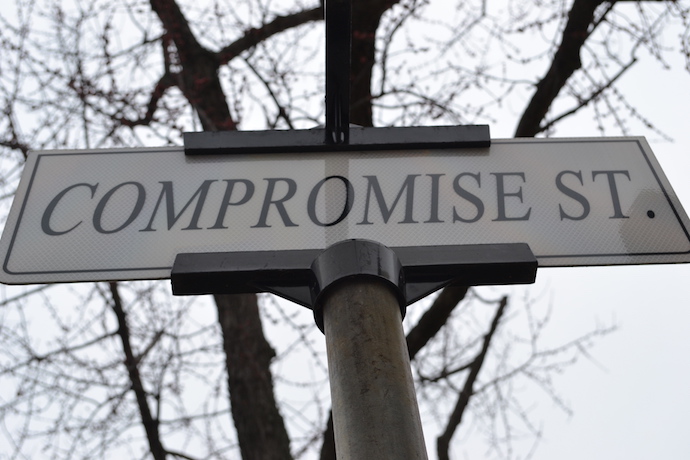 In my travels around Virginia, I talk about Republican principles a lot. I offer this example of Compromise versus Principle:

Think about your kitchen. Consider the walls. Look at the color. Many kitchens are bright, which makes the room feel open and welcoming.

â€œWeâ€ could obtain diverse opinions from many people about the color of your kitchen. Every reasonable group of people could arrive at a compromise for the color â€œweâ€ should paint your kitchen. Some might lean towards mauve, others fuchsia, and still others magenta. No matter the size of the group, in a short time, a vote could be taken and â€œweâ€ could make a compromise.

However, the preferred color of your kitchen is not the real question. The question is: Do â€œweâ€ have the authority to paint your kitchen?

Because the answer is â€œNo!â€ thereâ€™s no ability to â€˜compromiseâ€™. Even if the group wants a color you can live with, is willing to pay for it, will do an outstanding job and clean up after finished, it doesnâ€™t matter. â€œWeâ€ canâ€™t paint your kitchen, if â€œweâ€ have no authority to paint your kitchen in the first place.

It is wrong for the government to do something it has no authority to do. Because itâ€™s wrong, thereâ€™s no ability to â€˜compromiseâ€™ and let government do less wrong. Some grey areas of government exist. I get that. But some areas the government participates in now are clearly outside the limits of good government. Government must stop exceeding its limited authority. Recognizing limits is better than the so-called principle of compromise, which serves the Leftist Media, the Democrats and the Establishment on both sides, but not the people.

If the principle is the Free World must win the Cold War, then President Reagan was right to say, â€œMr. Gorbachev, tear down this wall!â€ A compromise would not have worked: If you donâ€™t mind, Mr. Gorbachev, please tear down a piece of the wall and let a few folks visit the West.

If the principle is all human life is precious, then compromises canâ€™t be made to kill when life is inconvenient.

If the principle is America is a nation of laws, then the compromise canâ€™t be – unless you are here illegally and have lived here for ten years. Not applying laws to illegal immigrants isnâ€™t a compromise. Itâ€™s a rejection of the principle.

If the principle is to let the free market economy work, then there is no compromise for the government to dictate a federal minimum wage. The federal government has no authority here.

If the principle is our right to keep and bear arms, then making compromises for universal background checks, limiting the size of magazines, requiring concealed carry permits, etc. is outside the authority of the government.

These compromises violate the principles.

Shak – this article is a real keeper and one of your best. And not to rain on your parade, but I have to say there is some grey in some of the principles you mentioned.

I’ll bite. Which ones?

For example, minimum wage. As long as the taxpayers are subsidizing the low wages employers pay (through welfare benefits), then we do not have – and never will have – a free market to determine what the minimum wage should be. Right now employers get the cheap adult labor, but we tax payers are left having to pay for the slew of benefits that low-paid adults are entitled to get. I am of the opinion that if an employer cannot afford to pay his or her ADULT employees a living wage, then perhaps that employer should not be in business to begin with.