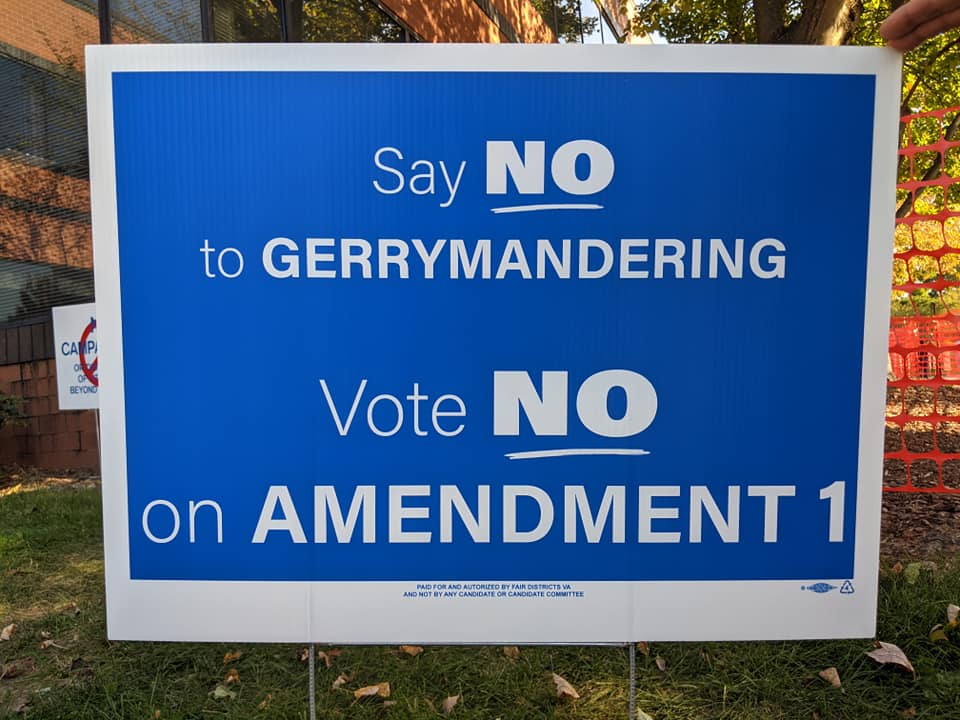 This sign is a lie. If Amendment One fails, we are stuck with Gerrymandering in 2021

The following is a great email from Brian Cannon, executive director of FairMapsVA.com, which is supporting Amendment 1 to create a bi partisan redistricting commission in the State Constitution to draw General Assembly and U.S. House Districts.Â  In my view, the main reason the State Dem Party is opposing Amendment 1 is for payback to the millions of dollars they got from fat cats like George Soros, Tom Steyer and Mike Bloomberg to flip the General Assembly to their control in 2019 â€“ and they donâ€™t want to lose control over gerrymandering when the new census comes out next year.Â  Such duplicityâ€¦

Youâ€™re getting this email because you care about ending partisan gerrymandering in Virginia.  However, youâ€™re probably also getting other emails and messages that are a part of a massive disinformation campaign run by some politicians whoâ€™d like to gerrymander you but wonâ€™t say the quiet part out loud.

So we are here to help.  What prompted us to write this was seeing an email from a Northern Virginia Delegate that encouraged folks to vote no on Amendment 1 and keep the power to redistrict in the hands of the General Assembly (we know what that gets us!). Then she actually wrote:  â€œThe General Assembly can and will do better.â€

At best, this is a pinky promise from a politician who has never introduced a redistricting reform amendment.  At worst, itâ€™s an outright lie to convince you to vote no and let the legislature draw their own districts one more time.  Either way, we arenâ€™t buying it and neither should you.

If youâ€™d like independent validation on this, please check out Ballotpediaâ€™s page on Amendment 1.  Or know that Mark Warner and Tim Kaine have already Voted YES on 1.  The Washington Post has endorsed YES on 1 – twice!  Congressman Don Beyer, who helped draft and patron HR1 – the best reform to ever get through the House of Representatives – is a YES on 1 advocate.

Why shouldnâ€™t you trust pinky promises from politicians?  Because the Democrats were in control of the legislature this year.  Their alternative plans did not make it out of a House committee.  HB1256 — a good bill, despite that it simply created an â€œadvisoryâ€ commission — didnâ€™t even make it out of subcommittee as an independent commission. The other good measure was an amendment: HJ143.  House Democratic leadership killed that amendment in the Rules Committee on a voice vote!  Lastly, a last-minute change to the constitutional amendment also failed, prompting two national redistricting experts to write an op-ed with the title â€œSomethingâ€™s Rotten in Virginia.â€  Thank goodness it failed, because it wouldâ€™ve guaranteed that the party in power could continue gerrymandering.  They had no viable alternative plans.

An example of a disingenuous (lying) sign regarding Amendment Number one, another example is on the top of this post.

Bi-partisan redistricting is now in the State Constitution – The Bull Elephant November 6, 2020 at 1:16 pm