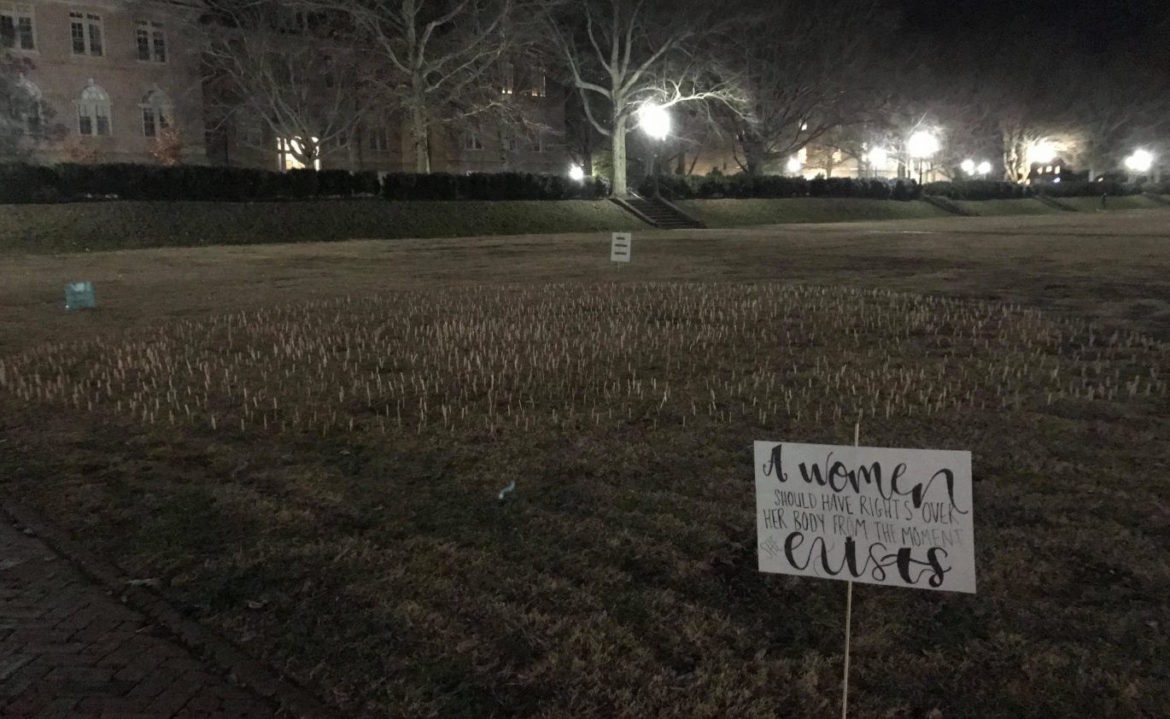 Last week, to mark the 45th anniversary of Roe v. Wade, pro-life students at the College of William & Mary and the William & Mary Law School in Williamsburg erected a pro-life display commemorating the lives lost since the 1973 Supreme Court decision.

The display included posters and thousands of popsicle sticks placed into the ground to represent the thousands of abortions performed every day in the United States in the post-Roe era.

To the horror of the students responsible for the display, and to anyone who believes in freedom of expression, the administration-approved display was vandalized overnight and destroyed.

What was so offensive about the display that would cause others to violently attack it?

Nothing, really.  One poster read, “A woman should have rights over her body from the moment she exists.” Another said, “Love Them Both,” referring to the mother and the child. Another reflected the theme from this year’s March For Life: “Love Saves Lives.”

Apparently that’s too much for the hyper-intolerance of modern college campuses. The display was destroyed within hours of being erected.

As Katherine Beck, who is President of the Advocates for Life at William & Mary law school, told TBE,

“Even if you don’t agree that what’s inside a woman’s womb is a life, that’s a message of love someone is trying to spread, and for someone to rip it up in the middle of the night and throw it in the trashcan, that was really hard to see, especially at William and Mary.”

It’s really sad that even such a simple message—one that neither shames nor demeans, but is instead meant to inspire—finds such little tolerance at one of America’s top institutions of higher learning.

To their credit, W&M administration officials have launched an investigation, and have reportedly been reviewing security camera footage to find the perpetrators. However, more than a week later, no disciplinary actions have been announced.

In the meantime, the pro-life students who organized the original display are planning a second one that will be bigger and hopefully longer-lived, with better security measures. This time, because of the intolerant vandalism, it is sure to garner even more attention on campus. Let’s hope the vandalism causes at least some students who might otherwise have been dismissive of the effort to instead question their assumptions, and approach other students’ heart-felt message with an open mind. 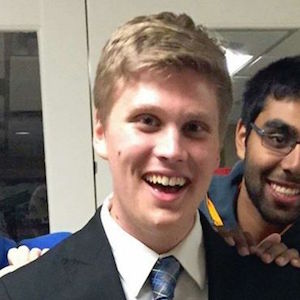 UPDATE: Charges have been filed in connection with this incident. According to Willimasburg Yorktown Daily, 21-year old Daniel Sheaffer, of Sterling, has been charged with one misdemeanor count of destruction of property. Sheaffer is apparently upset that this matter of public record became public, however, and has issued a statement via Facebook saying that he regarded what he did as “friendly garbage removal,” and that the police misled him into thinking that this matter of public record would remain private. He further indicates that he believes that by not making this matter of public record private, the police are “putting a student’s well-being at risk over popsicle sticks just to appease conservative media outlets.” 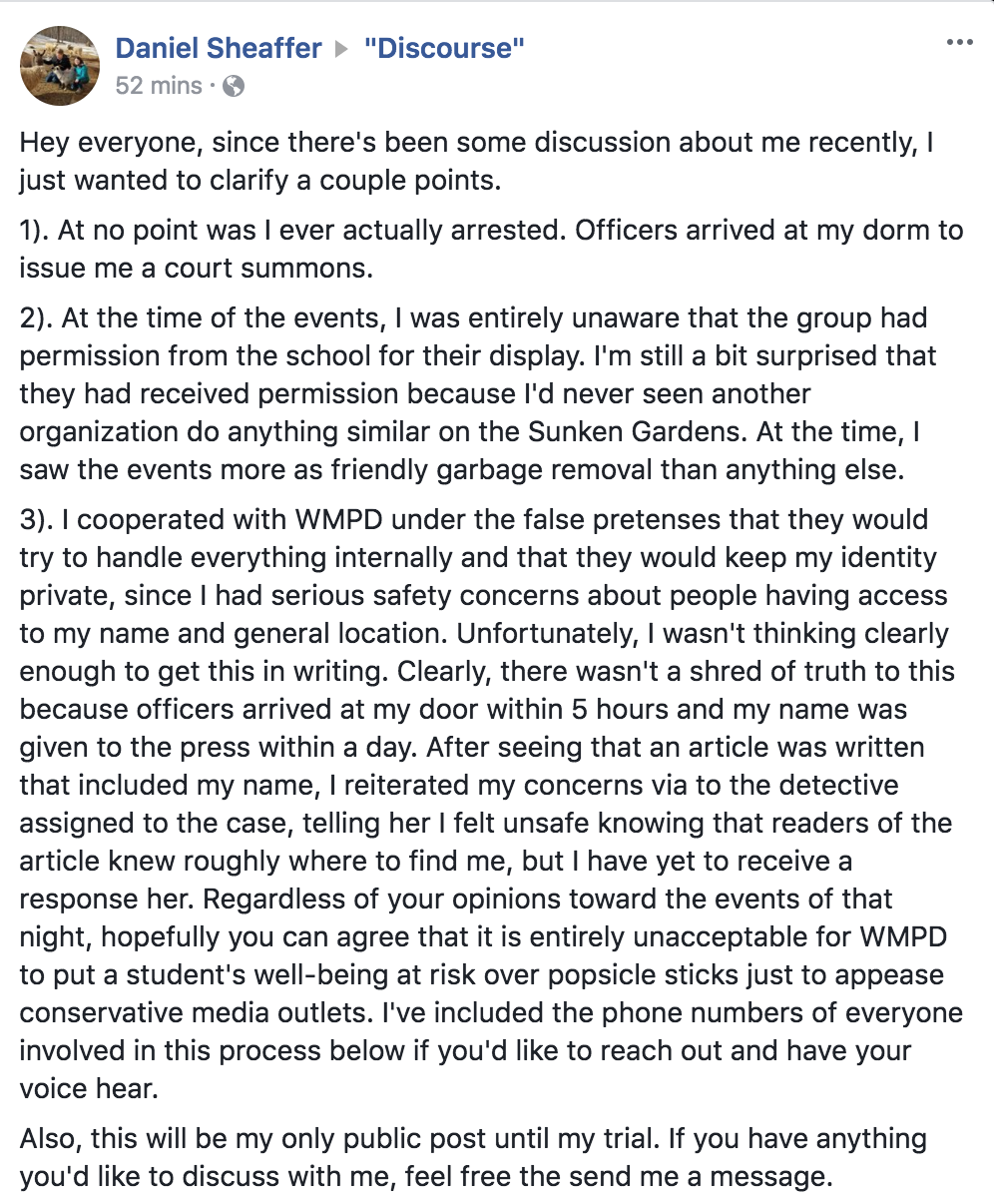 Such a poor, delicate, entitled flower this young person is. Try this, young Mx. Sheaffer: next time, if you don’t want to be held publicly accountable, don’t vandalize a public display.

“The students who set up the display followed the university’s process and protocol for these types of demonstrations. Vandalism or destruction of property is never an acceptable form of expression and clearly a violation of university policy. We are grateful for the hard work of William & Mary Police in this case and pleased an arrest has been made.”

I am more interested in what the college administration does than what this idiot thinks. By the way, if he was only removing popsicle sticks, then why scribble on the signs. Typical of the SJWs, he can’t even lie effectively and probably doesn’t know his comment will be addressed in a trial and also by the college administration. My guess is this will be plea bargained to avoid embarrassment to W&M but unless he is expelled this will remain a stain on the institution itself.

Update: an individual has been arrested. He is a W&M student. The charge is misdemeanor destruction of property. No indication if W&M administration will suspend or expell said student —- as they should.

Make him talk. Make him reveal his ANTIFA overlords. You do know leftists are prowling campuses, right? Use him to get to his masters.

Don’t worry, you’ll see bold condemnations of this act of vandalism and ideological intimidation from local Democrats and pro-choice entities any day now an-HAHAHA almost made it with a straight face. Nah. they won’t give a damn. Hell, bet they had a good chuckle over it in fact.

“A woman should have rights over her body from the moment she exists.”

…until she is born then we (the “pro-life” Republicans) will take care of things from there.

That was the unwritten message of the “display”. Any wonder someone reacted negatively?

Their signs don’t even make sense to people who aren’t in their movement, so how was anyone supposed to know what the popsicle sticks were? It looked like trash. D- for effort. The only reason it’s not an F is because the popsicle sticks were a clever way to hide the fact that there’s only like 5 people in their anti-choice group. They claimed to have 9 member in another article (which I assume is an overestimate), only one of which is an undergrad.

If they wanted to raise awareness, they wouldn’t have waited until after dark on a Saturday night to throw some popsicle sticks in the middle of a field with 3 low-effort, cryptic posters. It almost seems like they were *counting* on people mistaking it for litter left behind after a big demonstration.

Who ever decides to set up the next one, get a game camera ans set it up too.

According to reports, there is video.

There is an ANTIFA chapter in the greater Williamsburg area. This may not have been a student group. However, W&M is no different than a lot of today’s universities run by weak leftist excusing administrations. The first open act of leftist suppression of free speech occurred a few months ago against an ACLU speaker and nothing happened. Now this act of leftist suppression involves property destruction. It is pretty obvious that the situation is escalating thanks to an administration that condoned the arrogant SJWs and their behavior.

They had to know this would happen.

Almost certainly. Once you go down the suppression of speech road, it will get worse and this just proved

And so they should have don what? Not express their views?

I thought the they was the college administration but it could also mean right to life students as you point out. The administration is culpable as they certainly know that the left is running around campuses and destroying things all over the nation.

If true it would seem you will catch them in the act if you simply wait. Or should they simply trail ANTIFA? If the administration were culpable, why didn’t they deny permission to post the display at all? Had you considered the imposition of double-secret probation? Where is Douglas Neidermeyer when we need him? Dean Wermer?

They can do what they like. I’m just saying that when they decided to create this display, they knew it would be destroyed. I think it likely that they were just as interested in making the free speech point as the pro-life point. They probably thought the destroyed display would get more attention than a tolerated display. Mission accomplished.

If nothing like this had happened in the past, why would you anticipate that it would in the future. Somehow you think that W&M is in the process of descending into anti-intellectual and anti-Bill of Rights hell. You are probably right unfortunately.

I point out that Republicans and Republican headquarters around the country are regularly attacked. Should every Republican walk the streets armed? Why should Republicans have to anticipate this any more than their Democrat counterparts. It appears that you accept the law of the jungle more easily than your should.