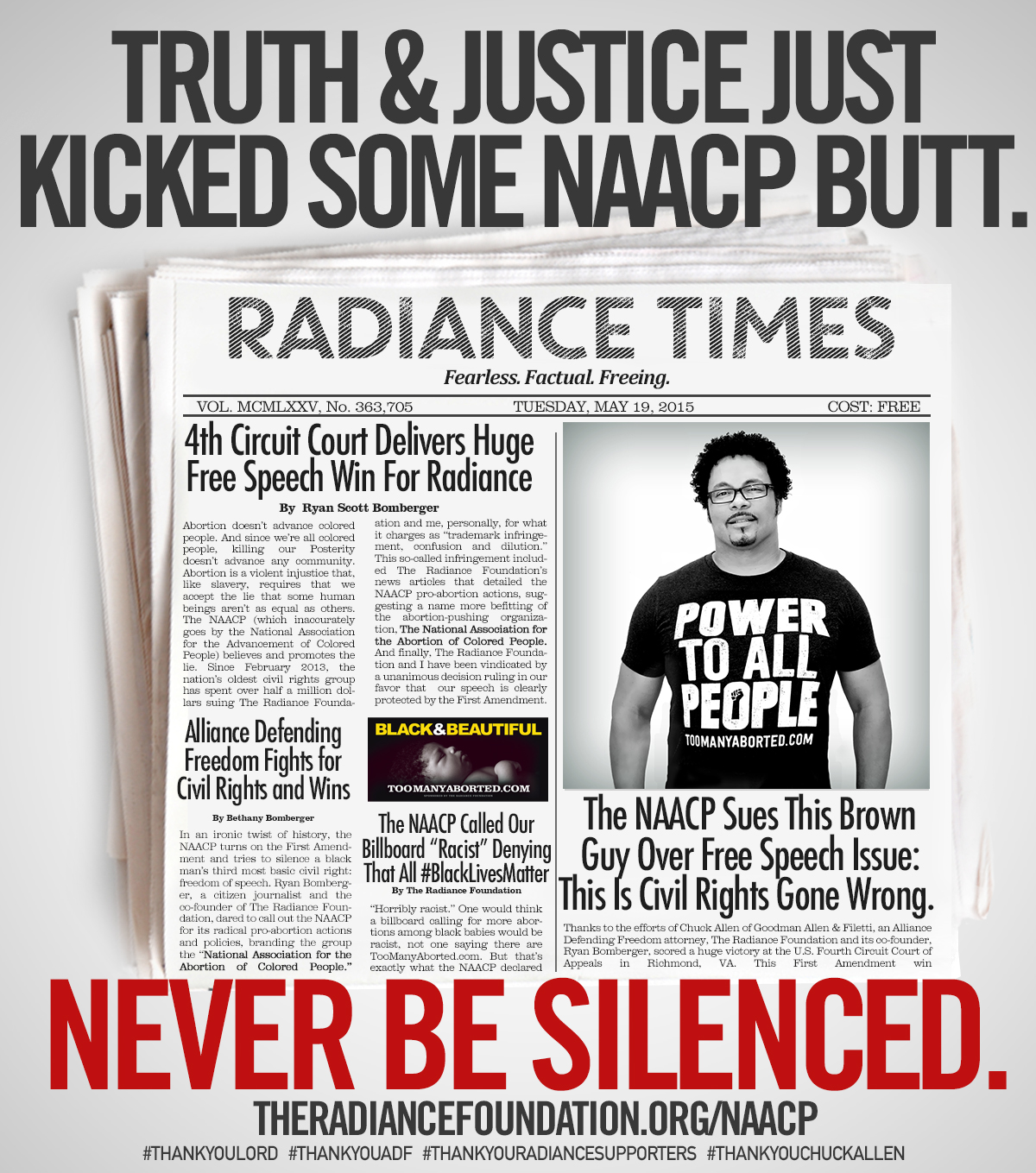 On May 19, 2015 the U.S. Court of Appeals overturned a gag order placed on The Radiance Foundation and Ryan Bomberger for referring to the NAACP as the National Association for the Abortion of Colored People. [read_more]

Ryan Bomberger and his wife Bethany founded and operate the Radiance Foundation an organization devoted to traditional values.  Although their issues reach beyond protecting the lives of pre-term babies, the organization is primarily devoted to Pro-Life positions.

As seen in billboard campaigns and through the website toomanyaborted.com a major focus is on “Planned Parenthood’s racist and eugenics-based history and its unaltered course.”

The source of the conflict

Beginning in 2011, in response to dismissive comments made by an NAACP official about the Radiance Foundation’s work, Mr. Bomberger began referring to the NAACP as the National Association for the Abortion of Colored People to underscore the connection between the NAACP and various Pro-Choice causes.  Instead of competing in the arena of public ideas, the NAACP responded by sending a cease and desist letter claiming the phrase “National Association for the Abortion of Colored People” infringed on its NAACP trademark, that it constitutes willful infringement, unfair competition, and will cause consumer confusion.  Litigation and monetary damages were threatened.

The Radiance Foundation sought assistance from the Alliance Defending Freedom who arranged for able counsel, Charles Allen, of Goodman, Allen, and Filetti of Glen Allen, Virginia to represent the organization pro bono.  They filed suit against the NAACP seeking a declaration that the Radiance Foundation could use the contested phrase.

After a three day trial in December 2013, and a four month wait for a ruling, Judge Raymond A. Jackson of the U.S. District Court for the Eastern District of Virginia ruled in favor of the NAACP, ordered Mr. Bomberger to take down the posts that violated the NAACP’s trademark, prohibited Mr. Bomberger from posting additional posts on any site that did not take down the statement, and ordered a small monetary penalty.

Unwilling to allow the violation of his First Amendment freedoms to rest, the Radiance Foundation appealed to the U.S. Court of Appeals for the Fourth Circuit.  On May 19, 2015 the unanimous three judge panel ruled:

[T]rademark infringement is not designed to protect mark holders from consumer confusion about their positions on political or social issues. p.23

Trademark law in general and dilution in particular are not proper vehicles for combatting speech with which one does not agree.  p. 35

The article in this case was harsh.  But that did not forfeit its author’s First Amendment Liberties. p. 36

The court concluded by sending the case back to the trial judge to dismiss the NAACP’s claims.

Used with permission from the Radiance Foundation.

The Radiance Foundation rejoices in victory

Speaking with Mr. Bomberger today he relates positive feelings about the victory and concern for the once venerated NAACP:

It is encouraging that justice from time-to-time still prevails.  Seeing the Fourth Circuit overturn the lower court’s ruling, which was an assault on the First Amendment is also encouraging.  It is ironic that the NAACP forgot that free speech is a civil right.

He further related that the NAACP maintained throughout the trial that it held no position on the issue of abortion despite a 2004 resolution clearly staking out a Pro-Choice position and then promoting it through the press, and accepting Planned Parenthood as a corporate sponsor.  Further, while this case was going on, the NAACP was suing the state of Arizona seeking to have a ban on race and gender based abortions overturned.

The National Association for the A******* of Colored People has certainly come a long way from its admirable roots.

Read Mr. Bomberger’s work (and interesting life story) at Lifenews.com and at the Radiance Foundation website.