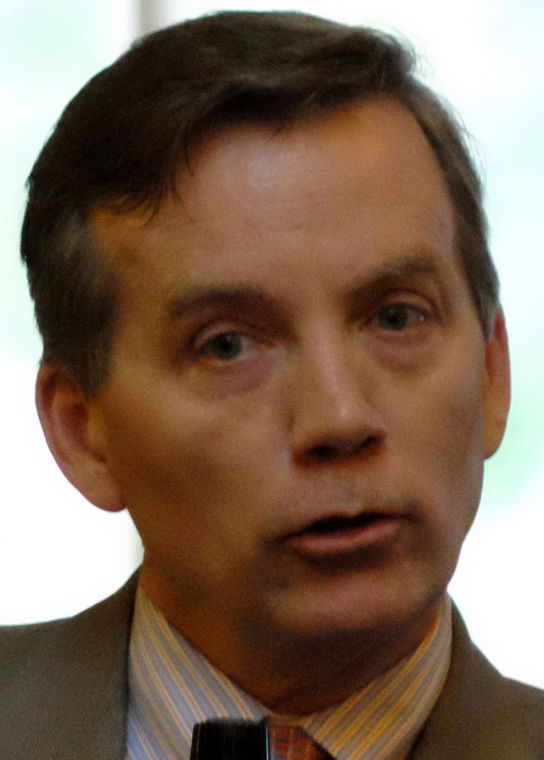 Remember back in September how the General Assembly passed a new appropriations bill a mere three days after it was publicly unveiled? Remember how we were told that acting immediately was crucial to protecting Virginia’s credit rating and to doing the “prudent” thing to protect the Commonwealth’s finances? Well, guess what…that bill has STILL not become law. The General Assembly reconvenes its special session on Monday to deal with it. [read_more]

As we covered in more detail at the time here and here, leaders of the House and Senate money committees reached agreement with the Governor over the summer to rush through a new appropriations bill to cover a projected shortfall in revenue collection, based on the Governor’s subjective forecasts. (Revenue collections in the first quarter are actually significantly higher than projected). House leaders conceded that such a bill, outside the normal legislative processes, was “unprecedented,” but justified their haste by exaggerating risks to the Commonwealth’s credit rating, among other things.

We know this bill was in the works since shortly after the effort to sneak through language allowing the Governor to expand Medicaid on his own was quashed back in June, and that the reconvening of the special session in September—which was ostensibly to hear debate about Medicaid expansion—was really just a vehicle to get another appropriations bill passed after July 1, 2014.

The Wages of Deception. But a funny thing happened. The bill was introduced just three days ahead of when it was brought up for a vote. In bypassing normal legislative procedures, including a meaningful opportunity for legislators and members of the public to examine the proposed legislation, the authors of the September appropriations bill (HB 5010) made an absolutely HUGE mistake. In their haste, they inadvertently triggered the mechanism designed to protect the transportation trust fund.

You see, HB 5010 takes money designated for transportation by the 2013 tax and transportation package and redirects it for other purposes. The catch is that the 2013 legislation says that if such funds are raided, then the tax increases that fund them would automatically expire on December 31st of that year. Stated another way, by passing HB 2010, the legislature set in motion the expiration of the 2013 tax increases!!

Delegates Dave Albo and Jim Lemunyon pointed out this flaw the day the bill was passed, but their concerns were brushed aside. Unfortunately for the proponents of this ill-advised legislation, bond counsel later advised that the state would be unable to sell bonds against tax increases that looked like they would evaporate. Basically, what the proponents of the back room deal with the Governor had said was their chief motivation for moving so quickly and secretly with this budget bill (protecting our credit ratings) was actually put in serious jeopardy by what passed.

To avoid this disaster and to try to cover their tracks, Governor McAuliffe offered amendments to HB 5010, rather than signing the bill or simply allowing it to become law. The Governor’s amendments would essentially repeal the “kill switch” protecting the transportation trust fund, thus allowing it to be raided with impunity. (I just love how something this consequential is cloaked as being merely “technical amendments”). 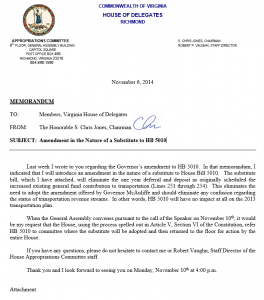 The Fixer to the Rescue. Del. Chris Jones (R-Suffolk) is chairman of the House Appropriations Committee. In a bid to avoid forcing members to essentially vote on last year’s tax increases again, Jones has now crafted a “third way” solution that skirts constitutional requirements that the Governor’s amendments be given an up-or-down vote. Members of the General Assembly have confirmed for The Bull Elephant that this will involve the House of Delegates dishonestly determining that the Governor’s amendments are constitutionally deficient, thus allowing them under Article V, Section 6(b)(iii) of the Virginia Constitution to treat HB 5010 as if it were a new piece of legislation, capable of being amended in any way. Under the Jones approach, HB 5010 will simply put back the money taken from transportation so there can be no question about the “kill switch” being triggered this year.

Basically, the General Assembly is taking a mulligan on the embarrassingly deceptive way in which HB 5010 was passed in the first place.

Putting the “Lock” back in “Lock Box.” Del. Bob Marshall (R-Prince William), in a blast email this morning, pledged to try to fix another shortcoming in the law that is left unaddressed by the Jones mulligan bill. According to Marshall, he and Del. Mark Berg (R-Winchester) will offer an amendment to the Jones mulligan bill that addresses the underlying problem here: that in the original budget bill passed in June, the appropriators inserted language in the enactment clauses that the drafters of the original HB 5010 thought was sufficient to allow them to raid transportation money in the first place.

Every Republican in the General Assembly who is serious about fiscal discipline should support this amendment when the session reconvenes Monday to take up the Jones bill. And then they should ask how they find themselves in a situation where they voted for a budget in June that allowed this, and why HB 5010 was even necessary in the first place, particularly given the fact that in the absence of the law the Governor is already making cuts supposedly authorized by HB 5010.

What we have here is an ill-considered piece of legislation that was kept from most members and the general public until the last minute. As even its authors concede, this legislation is unprecedented in Virginia, where Governors have significant authority to handle shortfalls on their own between normal legislative sessions. We have a budget situation where the shortfalls appear, um, exaggerated, and where the original excuse for the urgency in passing the bill is revealed by the continued lapse of time to have been a fiction. The question remains without any satisfactory answer: why was this bill necessary, and what were the Governor and money committee chairmen hiding by handling it the way they did?

As we’ve previously written, there are no coincidences in politics.

This post has been updated to correct the citation to the Virginia Constitution. The post originally cited Article VI, when the correct citation is Article V. Thank you to commenter Peacemaker for drawing our attention to the discrepancy.