On Tuesday Loudoun County Public Schools will have their thirteenth snow day.  Loudoun county is in the unique position of having 15 snow days allotted for each school year.  According to Wayde Byard, Loudoun county schools information officer and a familiar voice to Loudoun county parents, “Loudoun county does not have make-up days”.  With another storm coming next week, March 12th and 13th, it’s likely that Loudoun will use all 15 days.  Other counties are not so fortunate.  No other county in Northern Virginia has so many snow days built into their school calendars.

After tomorrow, Fairfax county will have missed 12 days because of snow.  The school system allows for 3 missed school days each year.  They made up one missed day on February 17th and will make up a second day on April 7th.  The other seven missed days will be added on to the end of the school year, which means school will continue into July.   From the FCPS website,

“Since FCPS has already used its allotment of three inclement weather days for this school year, the makeup days for the January 21 and 22 snow days will be Monday, February 17, and Monday, April 7, respectively. The January 23 snow day does not need to be made up. In the event of additional closings, the makeup days will be added to the end of the school year in June. February 17 will be a full day for elementary schools; they will close at their usual Tuesday through Friday time. The schedule for the April 7 makeup day is still under consideration and will be shared with families and employees as soon as possible.”

Prince William County will also have their 12th missed school day tomorrow.  To make up some of the missed instructional time they have reduced all recess to 10 minutes per day and added March 31 to the calendar and June 17th and 18th.  Since they have had two additional missed days since they added those extra days, it’s likely they will have to add even more days in June.

Stafford County changed February 17th to a school day and converted April 18th, May 23rd, and June 11th from early out days to full instruction days.  They  have also added June 16th and 17th to the school year.  However, there have been two additional missed days because of snow.  More instructional days will have to be found, most likely to be added on to the school year in June.

The chart below for the DC area was made prior to the two additional missed days, March 3rd and 4th. Click to enlarge. 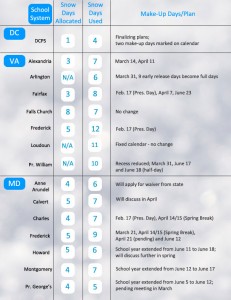