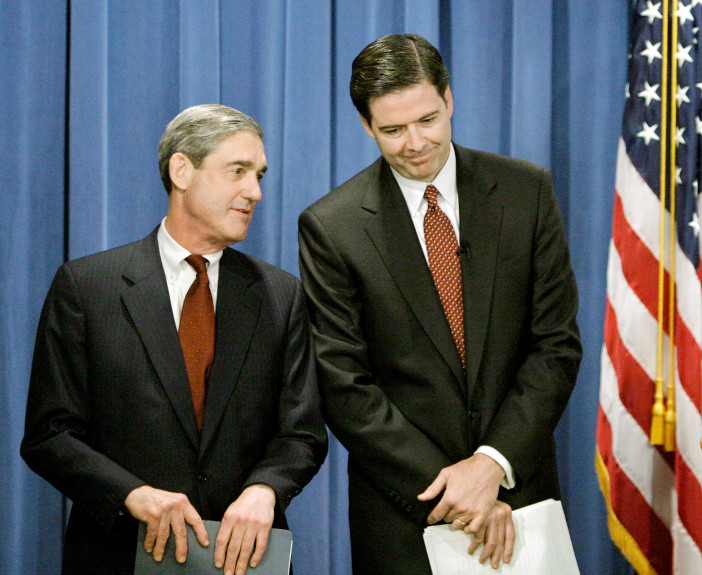 Bureaucracy, any bureaucracy, has as its main goal the survival of its own processes.

The unavoidable truth is that the process of running a government entity, from the schools, local and state governments, the federal government and increasingly the various law enforcement agencies, means that maintaining and feeding the processes that sustains the bureaucracy becomes the only thing that does work efficiently.

The process becomes its own objective.

Many of us, this writer included, who had formative management and executive experience in the private sector, were surprised to discover when they took executive positions in the Federal government, that managing inside the bureaucracy at any level was like punching a humongous ball of Jell-O. Everything shakes a little, then before you know it, returns to being a humongous ball of Jell-O. The process wins. The exceptions are few and far between.

President Trump is no doubt beginning to grasp this reality right about now.

The maintenance of the process takes a lot of work, and the most important upkeep is done by civil service managers and executives who become invested in the process. This is how we end up with management systems that train to the process, regardless of whatever the purported product or service of the agency is supposed to be.

In the end, managers tinker around the edges of the work output, while spending a lot of time and money carefully squeezing out any hint of non-conformity, independent imagination or innovation that would disrupt the bureaucratic processes. To do otherwise would endanger their own source of real power; the bureaucratic inertia that acts as a moat around the program or agency.

The results of this type of management is now readily apparent in the law enforcement and intelligence communities where there is a paralyses that makes inaction safer than action. The process not only makes management a collaborator to failure but intimidates the rank and file – the good people who want to do a good job –  and leads to a system-wide gridlock.

After the recent school shooting in Broward County’s Marjory Stoneman Douglas High School in Florida, many citizens were stunned to hear that the FBI itself was informed at least twice that this maniac was a mass murderer waiting to happen and had actually posted social media comments about attacking schools, but failed to follow up on the information.

This dreadful miscue of judgement and oversight, is not really isolated, but is merely another in a long list of such incidents that feeds the public unease over botched investigations or ignoring critical information by local and federal law enforcement and the intelligence community including virtually all of the high profile events in the past several decades  Waco, Ruby Ridge, 9-11, Fast and Furious, Fort Hood, Boston, San Bernardino, Orlando, to name a few of the highlights of the long list of failure.

This is what we’re seeing now so clearly with the FBI, the Departments of Justice, State and others. The bureaucracy and its managerial gridlock become the tools that bad politicians use to advance schemes and devices that are unethical, immoral, illegal, unconstitutional, or just plain stupid.

The FBI has had two terrible Directors in a row (and the jury is out on the the current one). Robert Mueller who is now Special Counsel in the tainted Russian probe, and James Comey, the disgraced Director that President Trump fired for lying to Congress, among other shenanigans. These two men took full advantage of the captured management system to stifle any blow-back from the good career managers still at the FBI as they worked outside the boundaries of ethicacy repeatedly, and occasionally walked on and over the yellow line of legality itself. They themselves became the lawbreakers.

The same goes for the CIA, DIA, State and the National Security staff, where dysfunction and chaos can be seen in the long, long string of disastrous decision making to the now daily leaking of information for strictly political purposes – to impale the sitting President.

This damage in our government management systems is not exclusive to these agencies by any means, they’re only the most visible. The IRS scandal is a classic example, where certain groups were targeted for their political views, and no one in the civilian management raised any objection, and the head of the IRS even defended the illegal activity. This type of managerial straight-jacket captures even what would be considered more straight-laced agencies like FDIC, caught red-handed blackmailing financial institutions to stop doing business with certain categories of private enterprises they alone deemed objectionable, with no push-back noted from the rank and file managers.

This is what happens when government grows out of control and becomes a functioning arm of the ruling class, that decided long ago that the rules that control the rest of us don’t apply to them. Of all the daunting issues facing the survival of liberty, the growth of an uncontrollable administrative bureaucracy may actually be the most threatening and the most pressing.

And it is the best argument for dramatically slashing the size, scope and reach of government.

Name an element of government that has actually been eliminated – not just folded into something else or had its name changed. I can remember one example where a guy was given an absolutely useless job for political show and finally got sick of doing nothing day after day. He eventually blew the whistle and it cost him his “job”.

Bureaucracies are the closet thing to organizational immortality on the face of the earth and very few of them shrink.

As bad as the bureaucracy is in the USA, it is no where near as bad as the EU bureaucracy. We at least have freedom of speech and arms to back it up if necessary. In much of Western Europe, a complaint about Islam, or the government itself, gets you a visit from the hate speech police. As far as defending yourself from violence, good luck because if you do so with anything other than screaming, you will get arrested – assuming you survive the assault.

Giere: “This is what happens when government grows out of control and becomes a
functioning arm of the ruling class, that decided long ago that the
rules that control the rest of us don’t apply to them. ”

News: “Shortly after taking his job, Pruitt was stuck in traffic and asked the
head of his security detail, Special Agent Eric Weese, to turn on his
sirens to clear cars off the road. Weese, a 16-year veteran of the
agency, told Pruitt that sirens were only used for emergencies. Pruitt
fired him.”