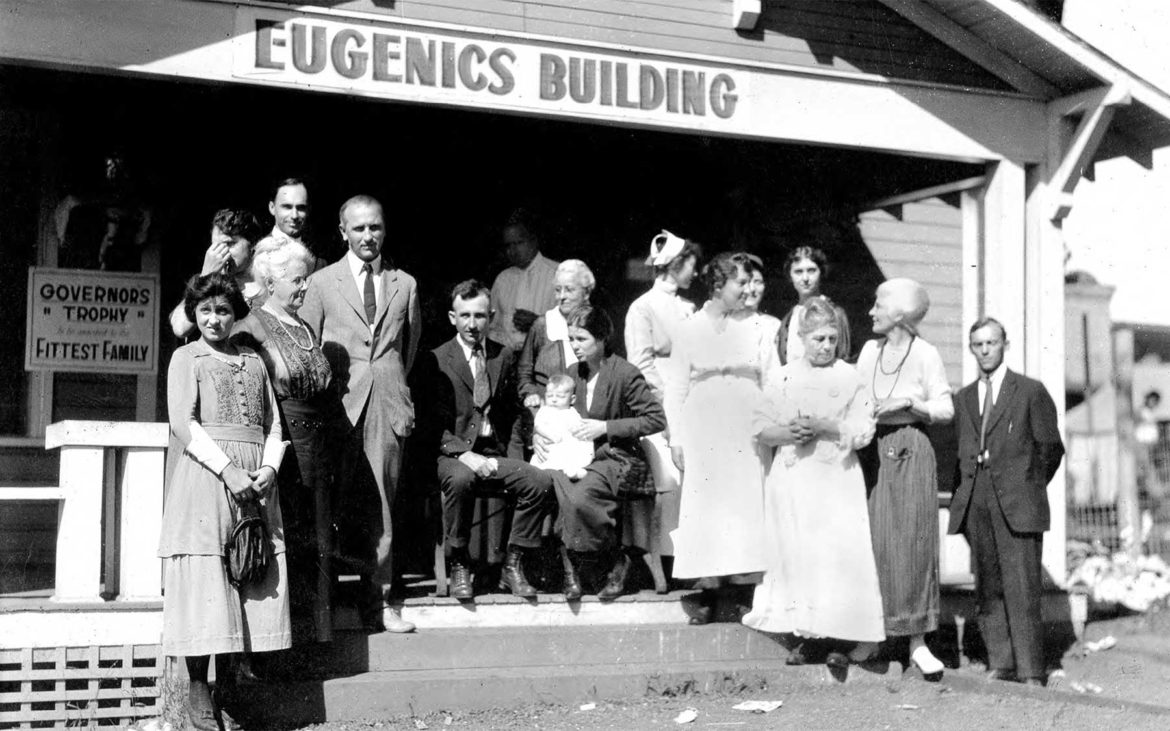 Progressive Settled Science – Keeping Us Away From Progress

Most of what you hear from the radical leftists, when we try to question anything such as global warming or mask effectiveness is “this is settled science there is nothing you can do to change that”.  Don’t question the truth!  Or so we’re told.

I’d like to take a few minutes to discuss things that the progressives used to call “settled science”.  Let’s start with eugenics.  Eugenics was a mainstream movement that started in the 1880s, by a cousin of Charles Darwin.  It was normalized in the early 1900s by the progressive movement, under the guise that a “progressive quest for healthy babies” was a good thing.  Many people at the time questioned the concept of eugenics.  Yet famed scientist Paul Barry dismissed the skeptics because they weren’t scientists and the concept of eugenics was “settled science”.   Settled science led to the sterilization of thousands of African Americans and other “undesirables”.

Now let us go to lobotomies.  For those of you who never watched One Flew Over the Cuckoo’s Nest – a lobotomy is where a “doctor” drilled holes into people’s heads, and destroyed the frontal lobes of a person’s brain.  The first lobotomy was performed by Egas Moniz in Portugal in the 1930’s.  Moniz was given a Nobel Prize in 1949.  The New York Times praised the work of Mr. Moniz and Walter Freeman, saying that lobotomists are helping us “to look with less awe at the brain – which is just a big organ… no more sacred than the liver.  Lobotomies were also called “settled science” by the medical industry.  Mr. Freeman (sorry but I refuse to call these people doctors) performed thousands of lobotomies until 1967, when one of his patients died of a cerebral hemorrhage.  One famous patient of Mr. Freeman was Rosemary Kennedy.  She was so severely disabled from Mr. Freeman’s dismantling of her brain that she needed care for the rest of her life.

Pretty much every person now would call lobotomies cruel.  Yet at the time lobotomies were “settled science” and to disagree with the powers that be at the time was heresy.  Henry Marsh, a leading British neurosurgeon called lobotomies bad science, saying that “It (lobotomies) reflected very bad medicine, bad science, because it was clear the patients who were subjected to this procedure were never followed up properly.  If you saw the patient after the operation they’d seem alright, they’d walk and talk and say ‘thank you doctor’.  The fact they were totally ruined as social human beings probably didn’t count”.

Now we are told that everything from “climate change” to criticizing Dr. Fauci is an attack on science.  People who criticize Dr. Fauci are often berated in the mainstream media and by legions of scientists.   As most of you are aware, I am not a scientist.   But what gives us true progress throughout history is people who question the norm, people who wonder if something can be done better.  So when someone says to you “this is settled science” know that they likely have a financial interest or personal/political interest involved.  They certainly don’t have your best interests involved.

We have a 1st Amendment right and a responsibility to future generations to question how things are done.  When someone such as Senator Rand Paul questions Dr. Fauci, he has that right and a responsibility to the taxpayers to do this.  When I and others question global warming as a made myth (remember that we’ve had “climate change” every year since the creation of time) and that there is little we can do to change the sun and the atmosphere, we have a right to do this.  We have a right and a patriotic duty to question our government.  Patriotism means love of country, not love of government or love of science.

Progressive Settled Science – Keeping Us Away From Progress was last modified: August 3rd, 2021 by John Massoud

Given the number of liberals in America, I thought lobotomies were still being performed.

Actually, they are self induced lobotomies.

“Eugenics was a mainstream movement that started in the 1880s, by a cousin of Charles Darwin. It was normalized in the early 1900s by the progressive movement…”

In America, the eugenics movement began in the 1900s with the work of Charles Davenport who aligned and worked with Republicans to advance the cause.

Eric, how many times have you told me that the Parties switched in 1965-ish? So, according to you, the old Republicans are the modern Democrats. At least, that is your logic. In that case, eugenics is another stained legacy of the modern Democratic Party.

I think you will find that Davenport simply a Conservative racist, David.

Settled science is part of the authoritarian playbook. As such it is embraced by democrats who loved slavery a couple hundred years ago and love it today via Covid mandates.

I don’t think Conservatives embrace science (settled or otherwise) even though they did support slavery in the south. You should get your facts straight, Doc.

That old civil war stuff is just so old. We can distort truth because nobody knows history any more.

Actually, Doc, look up the name of the first post Civil War anti-Republican political party in the south… it is the “Conservative” party. They became the southern Democrats then after the civil rights era, they became Republicans.

Not entirely true, David. In fact, 1869 the Conservative party used its majorities in the assembly to create a free public school system and the next year would segregate all schools in Virginia.

Further, there were serveral Virginia Republicans who voted against all of the Civil Rights laws that were passed in the 60s. 4 out of 10 Virginia Congressmen were Republicans in 1968 and all voted against the Fair Housing Act. In fact, for all the Civil Rights legislation there was only one “aye” vote by a single Virginia Representative and that was for the Voting Rights Act of 1965. Guess what, he was William Jennings, a Democrat.

Eric, we are talking different centuries, but I will leave you with this tidbit from Wikipedia since you have latached onto the “Conservative Party” of the 1800s: “In the Reconstruction era after the Civil War, former Whigs in several Southern states formed parties with the “Conservative” or “Democratic-Conservative” name. Eventually they all merged into the Democratic Party.”

As I said above, David… “…it is the “Conservative” party. They became the southern Democrats then after the civil rights era, they became Republicans”.

What they were, first and foremost, were racist Conservatives. As were the Southern “Lily White” Republic afc name, btw. That is why they eventually found the Republican Party so welcoming in the end. Common cause…

Keep running from your Party’s heritage. There is nothing there to be proud of.

“As most of you are aware, I am not a scientist. But what gives us true progress throughout history is people who question the norm, people who wonder if something can be done better.”

As you say you are not a scientist and when it comes to science, it is scientists who are the ones who question the norm and provide progress.

Then there is no social science or political science.

Why not, Dic? Do you consider Social Scientists and Political Scientists to be scientists? If not, then they are sciences either. Maybe it’s like how you are not really a Doctor…?‍♂️

“If not, then they are NOT sciences either.”

The left has settled science until they wish to bend the facts to fit their fictitious narrative.
We have always been taught man or woman, XX or XY, no middle ground. Now we are told there are 58 different genders.
We were told that all animal life begins with a heartbeat. Now the left still isn’t sure when life begins.
We were told that ‘leading from behind’ was a management style based on human behavioral science. Yet it doesn’t exist in sports,
science, business, the military or the government.
The left does as it pleases and then back-fills with their version of science.
I think they call it equity science.

Fabulous article. There is no such thing as “settled science.” Science evolves. In my 35 years covering science and the FDA, I have seen a number of scientific “givens” go out the window due to new research. I’ve seen a number of scientific studies debunked, too. Iim so glad someone brought up Eugenics, which the Nazis used to justify their mass extermination of Jews, gypsies, gays , mentally ill and other “inferior peoples.” The Nazis jsutfiied their inhumanity based on “Science” as people believed in eugenics back then and the need to sterilize the mentally ill, handicapped, and yes, african americans. In reality their science was junk science, particlalry the horfific medical experiments they conducted on death camp victims. The results were skewed or fabricated to please their SS masters. Japan engaged in horrific experiments on humans in Manchuria, too. All in the name of “good science.” When the jury comes in, we will learn that Fauci and the public health bureaucrats at the WHO, Wuhan Lab, CDC, and his agency flubbed this pandemic big time, and that masking and lockdowns didnt do sqauat. Meanwhile, millions of elderly folks and folks with underlying health conditions died needlessly.

Thanks. Glad you understand this fact. Where enlightened persons such as the half troll are incapable of seeing anything past this moment in time.

So the argument against the science surrounding climate change is now reductio ad hitlerum…??

Trolls are blinded by tyrannical socialist ideas that failed in the past. Their present is the past as is their future.

The democrats are still practicing a form of eugenics today against the “ unvaccinated”. Notice the words and images they use – they are no longer coaxing, they are demanding and punishing. The democrats, now officially socialists, are mentally incapable of changing their tyrannical ideology.

Just saw the Mark Dice video on people willing to sign a petition to have others arrested and jailed if they won’t get the COVID vaccines. Am betting that the trolls who post here are more than willing to do this.