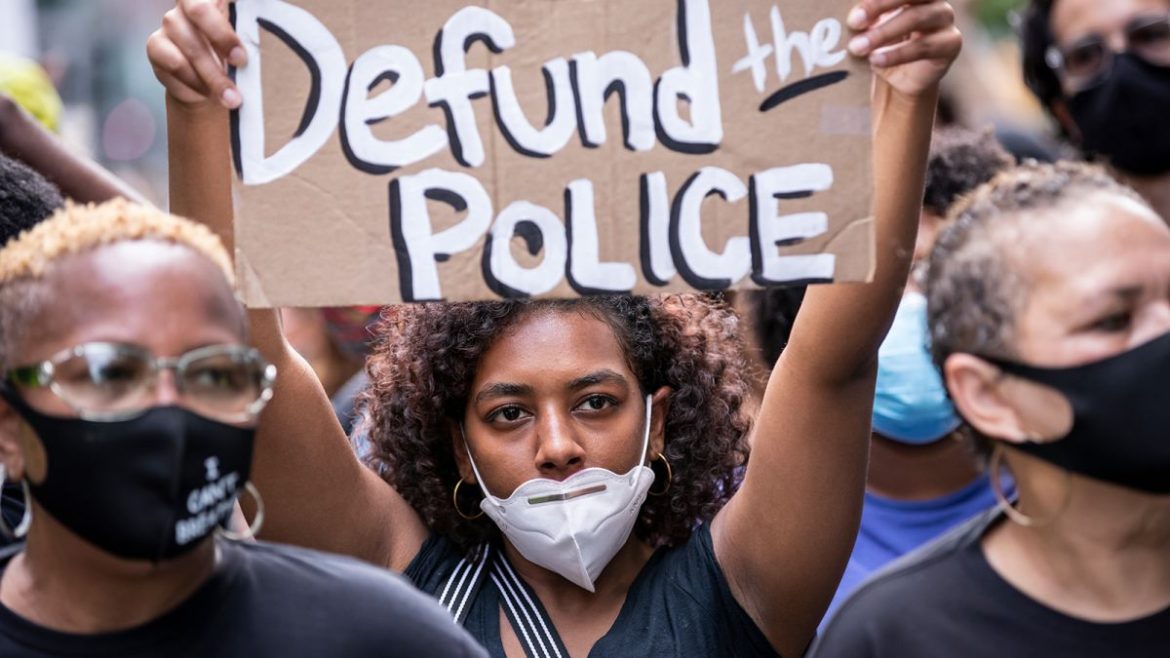 How does defunding the police make sense as crime rates rise? (source: CNN.com)

Advocates for prisoners wrongly blame poverty for violent crime, even though violent crime frequently falls during recessions and times of economic hardship. Law professor John Pfaff is America’s most famous advocate of cutting sentences for violent criminals. On May 14, he speculated that the big rise in shootings in New York City occurred due to a “pandemic” that “upended the economy.” But recent spikes in violent crime aren’t due to COVID-19 or the economy: homicides fell during the 2007-2009 recession, and in many other countries, murder rates actually went down during the COVID-19 pandemic.

For example, the murder rate fell in London by 16% in 2020, even though England suffered more from the pandemic than America did. England suffered far more economic harm than America did, with England’s economy shrinking 9.9% during 2020, compared to 3.5% in America. As Nicole Gelinas notes in the New York Post, murders also fell in other major countries in 2020:How about Italy, hit hard and early by the pandemic? There, murders fell by 14 percent, to 271 from 315.

France with its troubled banlieues? The countryâ€™s murders were down 2 percent in 2020, to 863.

Japan? The murder level was the lowest it has been since World War II. â€œHeinous crimes,â€ including murder, fell by 10 percent.

But these are all safe countries anyway. So what about cartel-ridden Mexico? There, murders fell by slightly less than half a percent last year, to 34,523 â€” the first decline in six years.

Pfaff took issue with an article in Politico which said that “gun violence escalates throughout the city [of New York] one year after anti-police protesters occupied the street.” Shootings did indeed rise 97% in 2020 in New York City, and gun violence has continued to rise this year.

If the pandemic isn’t causing the increase in violence, what is? These crime spikes are coinciding with new soft-on-crime policies. For example, newly-elected progressive prosecutors are refusing to seek enhanced sentences for repeat violent offenders, and refusing to seek life without parole for murderers (even serial killers), which they view as too harsh. The murder rate rose 30% last year in Americaâ€™s major cities, after the number of people in Americaâ€™s prisons and jails dropped by 14% from 2019 to mid-2020.

Moreover, recently, there has been “a notable decline in the number of police on the beat” in the U.S., notes Rafael Mangual of the Manhattan Institute:

In a September 2019 report, the Police Executive Research Forum outlined what it declared a â€œworkforce crisis.â€ A robust body of research has thoroughly illustrated that more police means less crime â€” a finding at odds with ever-more-popular calls to â€œdefund the police.â€ It stands to reason that a significant decline in the sizes of the nationâ€™s police forces could have helped set the stage for the violent crime uptick. There is also reason to believe that â€” in part because of the anti-police sentiments that characterized last summerâ€™s protests â€” the cops we have left became less proactive.

Recent policies have reduced the risk of being punished for committing crimes, and freed many criminals to commit more crimes:

Examples include the expansion of pretrial release through new restrictions on cash bail; the election of so-called â€œprogressiveâ€ prosecutors â€” many of whom have, among other things, diverted or declined to prosecute more cases and used their offices to reduce sentences by refusing to pursue certain kinds of enhancements; the decriminalization of certain â€œquality of lifeâ€ offenses; new restrictions on prosecutions of juveniles; [and] the elimination of some mandatory minimum sentences.

In Seattle, where the murder rate rose 74% in 2020, city council member Lisa Herbold claimed that â€œcities have crime spikesâ€ because â€œpeople are desperateâ€ due to the pandemic. But Seattle is one of Americaâ€™s richest cities, where almost everyone had enough to eat. Peopleâ€™s situation was far more desperate in Latin America, where the pandemic left many people without adequate food, yet murder did not increase in many Latin American nations. murder rates fell in 2020 in Guatemala, Honduras, Venezuela, and El Salvador â€” all countries where malnutrition is widespread. Each of these countries’ economies shrank during the pandemic.

Conversely, violent crimes fell in California as a result of Proposition 8. It increased prison sentences for repeat offenders who commit willful homicide, rape, and robbery with a gun. That didnâ€™t just keep violent criminals in jail where they couldnâ€™t commit more crimes. It also deterred people outside of prison from committing crimes, according to a National Bureau of Economic Research study.

Many murderers are spending less time in prison, due to â€œcriminal justice reform.â€ More became eligible for parole due to recent state laws. California expanded parole for adults who committed murder before age 25, in late 2017. Last year, Washington, DCâ€™s city council made murderers eligible to seek release after 15 years, if they committed their crime before age 25.

Two years ago, Washington Stateâ€™s supreme court declared it unconstitutional to give 16 or 17 year old murderers life sentences without the possibility of parole. It ruled in favor of a teen who murdered his parents and drowned his brother in a bathtub. In 2020, it struck down mandatory minimum sentences for juvenile offenders, even when they receive far less than a life sentence. Shootings rose substantially in 2020 and again in 2021 in King County, Washington State’s most populous county.

In places like San Francisco and Los Angeles, progressive district attorneys have recently refused to prosecute any minors â€” even murderers â€” in adult court. So murderers who commit their crimes at age 16 or 17 will not be locked up for more than a few years, even if they are serial killers. Shootings rose 73% in Los Angeles in the first four months of 2021, after posting a 40% increase in 2020. Killings rose 35% in the San Francisco Bay Area in 2020.

By releasing violent criminals earlier, these â€œreformsâ€ could result in more killings of innocent people. Murder rates peak in the late teens and early 20s. About four in ten killers commit their crime before age 25. A tenth of all murders have historically been committed by juveniles, and once released, juvenile killers often commit more violent crimes, including more murders.

Actually, the Covid-19 correlation is between firearm sales and gun violence. Imagine that. Not expecting the resident legal eagle to put that connection together, however.

Being a Bidenite is beginning to get to you.

Have you seen the hilarious news morons doing the story of the anniversary of the Drug Thug who died resisting arrest at the Memorial Autonom. Zone in the sh.thole that is known as Minneapolis? The are in full bull crap speech about it when gun fire breaks and and their “security team” shuffles them to safety. The stupid reporter then goes on about how it is hard to get first responders or police into the zone when someone gets capped cause they was disrespecting someone…

England, France, and Japan have all had the reforms you complain about in this essay for decades, so not sure that’s the problem.

These countries also have strict controls on access to firearms.

So perhaps the problem isn’t criminal justice reform in the US. Maybe it’s the way gun rights supporters have normalized carrying firearms – and using them to settle disputes.

Oh Stanton Moron… no way will criminals get guns! Like laws ban hroin, meth, fentanyl… a favorite of your hero George Floyd jagoff…
No one can possibly get illegal drugs can they?
And’ numbnuts boy… if you make guns illegal guess what stupid?

As usual, you deflect from the point of the article.

When the truth is all too obvious, the left creates false narratives and equivalencies in hopes of distracting.