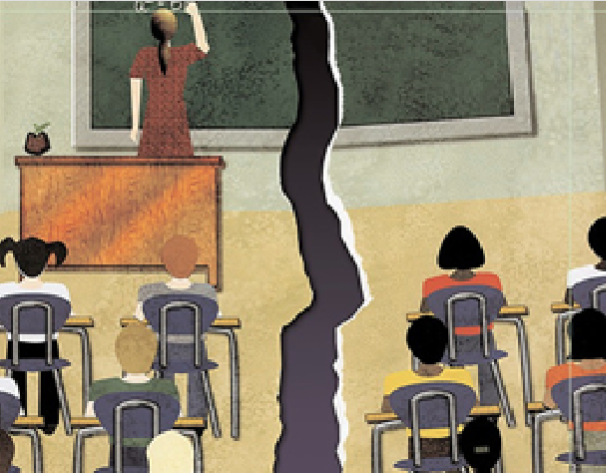 Progressive policies cause the racial achievement gaps that progressives spend so much time lamenting. Thatâ€™s the conclusion of Minnesota lawyer and think-tank president John Hinderaker, based on recent educational research. He cites a report from Brightbeam, â€œThe Secret Shame: How Americaâ€™s Most Progressive Cities Betray Their Commitment to Educational Opportunity For All.â€ The report is authored by Chris Stewart, a liberal activist from Minnesota. He studied why the progressive public schools in Minneapolisâ€™s biggest cities have among the countryâ€™s worst achievement gaps between white and black students. Brightbeam describes itself as â€œa network of education activists demanding a better education and a brighter future for every child.â€

Stewart compared achievement by race in various cities classified as progressive or conservative. Conservative cities (as ranked by political scientists) consistently did a more effective job of shrinking student achievement gapsâ€“occasionally, to zeroâ€“than progressive cities. The figure below summarizes the findings:

Brightbeam looked at a number of variables that it thought might help to explain these findings. It concluded that â€œof all the factors we looked at, progressivism is the greatest predictor.â€

The Brightbeam study did not attempt to explain which particular progressive policies caused these disparities. But it did call on progressive school districts to rethink their assumptions. At Baconâ€™s Rebellion, the longtime journalist James A. Bacon suggests some likely causes:

* Agency. By blaming racism and discrimination for the woes afflicting minority communities, progressives deprive minority students of agency â€” the sense that they control their own destinies and that their efforts will make a difference. If minority students see themselves as victims of systemic racism, why bother working hard and â€œacting whiteâ€?

* Lower standards. As an offshoot of the â€œself esteemâ€ movement, progressive educators donâ€™t want to damage the self-esteem of minority students. Accordingly, they have lower expectations and set lower standards for minorities to offset the advantages that white students have from â€œwhite privilege.â€

Research supports Baconâ€™s theory that breakdowns in classroom discipline resulting from progressive policies worsen the racial achievement gap. In New York City, suspensions were curbed by progressive school officials. The result? Minority students suffered most, as classroom disruption increased at the expense of their ability to learn. Manhattan Institute researcher Max Eden found that â€œschools where more than 90% of students were minorities experienced the worstâ€ effects on school climate and safety due to restrictions on suspensions. It is predominantly-minority schools that are most often plagued by chronically disruptive students who make it difficult for their classmates to learn.

Other studies have also found that progressive officialsâ€™ refusal to suspend chronically disruptive students increases the racial achievement gap. As Eden noted in the New York Post, a â€œstudy by a University of Georgia professor found that efforts to decrease the racial-suspension gap actually increase the racial achievement gap.â€ That research found that â€œin public schools with discipline problems, it hurts those innocent African American children academically to keep disruptive students in the classroom,â€ and â€œcutting out-of-school suspensions in those schools widens the black-white academic achievement gap.â€

In some places, progressives have curbed suspensions for violent or chronically defiant or disruptive students based on the assumption that suspensions must be racist, because it is disproportionately black students who are suspended. But racial differences in suspension rates donâ€™t prove racism, as appeals courts in Philadelphia, Chicago, and Richmond have noted. Instead, the differences in suspension rates reflect the fact that black kids are more likely to come from struggling single-parent households that fail to instill discipline. As the liberal Brookings Institution conceded in 2017, â€œBlack students are also more likely to come from family backgrounds associated with school behavior problems.â€

Education reporters, who are a staunchly progressive lot, have mostly ignored the Brightbeam study. But a few newspapers have recognized its findings. One example is an op-ed in the Minneapolis Star Tribune by liberal activist Nekima Levy Armstrong, titled â€œResearch shows progressive places, like Minneapolis, have the worst achievement gaps.â€ Armstrong describes the findings of the Brightbeam study:

The brightbeam report shows that progressive cities like Minneapolis do worse â€” and, surprisingly, conservative cities do better â€” when it comes to educating students of color. According to the report, conservative cities have gaps in math and reading that are on average 15 and 13 percentage points smaller than those in progressive cities.
***
Researchers also controlled for other factors that could potentially explain different educational outcomes, including poverty rates, population size, per-pupil spending and private school attendance rates. Surprisingly, none of these other variables made a difference in predicting the size of the opportunity gap.

What mattered most was whether the city was conservative or progressive. In three of the most conservative cities â€” Anaheim, Fort Worth and Virginia Beach, researchers found that leaders have either closed or eliminated opportunity gaps in either reading, math or high school graduation rates. Meanwhile, in our own â€œprogressiveâ€ city of Minneapolis, the report showed that the shameful gap in math achievement between black and white students in K-12 is 53 percentage points, while the gap in math between brown and white students is 45 points.