Proof that Trump is a Washington Outsider

Donald Trump has earned outsider status by receiving the fewest donations from Capitol Hill of any candidate in 24 years.

Only one member of Congress, and one candidate running for  Congress, has donated to Trump’s campaign for a total of $3,292.  In contrast Hillary has received $560,942 from 138 from current, former and hopeful Democrat members of Congress. She’s one of them, Trump is not. 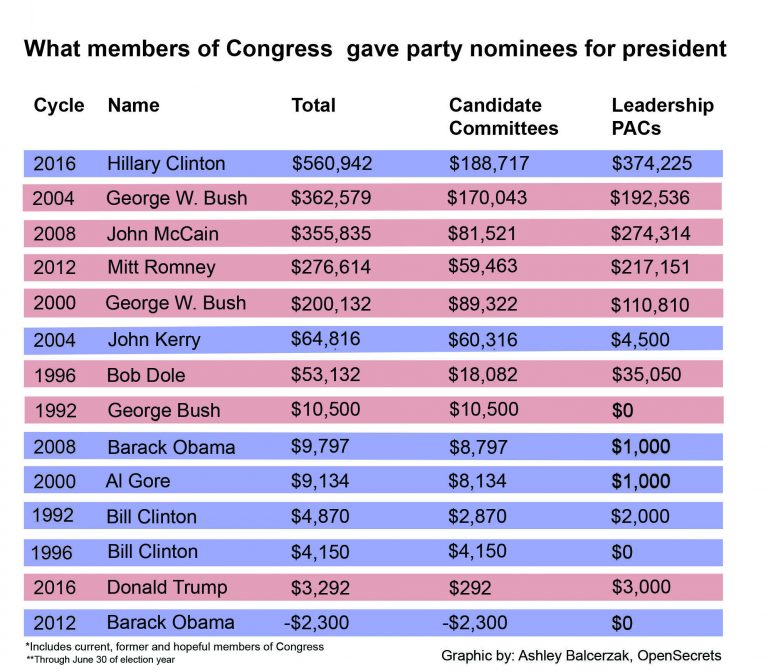 Proof that Trump is a Washington Outsider was last modified: August 14th, 2016 by Jeanine Martin

How come stories like this never get posted here?
http://www.washingtonexaminer.com/hillary-drafts-illegal-dreamers-to-get-immigrants-to-vote/article/2599321

Ask and ye shall receive, http://thebullelephant.com/hillary-drafting-an-army-of-dreamers-to-get-out-the-immigrant-vote/

Thanks for linking to that article.

You are welcome. Thank you.

Being the ultimate outsider is why he is so popular. If Trump wasn’t a threat he wouldn’t have the Uniparty so scared. He wins, their pockets stop getting greased on our dollar.

And yeah, didn’t need Manafort to state the obvious to anyone that follows politics. No doubt many here at the RINO Elephant don’t have a problem w/this.
http://www.breitbart.com/video/2016/08/14/manafort-anti-trump-republicans-connections-clinton-foundation/

Speaking of the Trump campaign, here’s an interesting report:
http://www.dcclothesline.com/2016/08/14/dnc-insider-hillary-clintons-campaign-is-imploding/

See what you all make of it?

Why would Hillary drop out when she’s ahead? No one ever drops out in the race for the Presidency.

Why not? There’s plenty of republicans that want Trump to drop out.

Hey, if they both drop out we can get the house to select a real president like Jeb!

Hahaha, I would love it if the House chose the next President. There MUST be someone better than the two candidates we have now.

So, you would just love the House to appoint the establishment president? And then, the establishment, would run the entire government. (Into the ground) Bush 43′ all over again, but worse. Probably $20 gasoline. Open borders and trade agreements galore! Most likely make it illegal to manufacture in America.

That’s sick. But I have known it for quite awhile. Why not change the name to Bull Establishment. You won’t support the Repulican nominee anyhow.

I can only applaud the degree to which TBE allows expression of varied opinions. They even put up with c**p from bitter trolls. If you really don’t like the way TBE is run, why don’t you ask the hall monitor for directions to the door? But I forgot you are the self-appointed hall monitor. But back to issues of substance…

What exactly do you think Trump is going to do, other than flip the bird to everybody on your behalf? After that, what? He will be forced to cooperate, or Congress will legislate through appropriations and shut him down. That leaves us with damaged goods — a guy who doesn’t know the language trying to do the work of a polished leader and communicator, or an altogether stalled Presidency. Either way, we will lose.

For expectations of “outsiders,” try “Indispensable,” it’s a good read. The author provides a reference for the readers’ expectations of Presidents, and puts rigor behind their odds of success.
https://www.amazon.com/Indispensable-When-Leaders-Really-Matter/dp/1422186709

Get a life dude.

Dropping out? Maybe better phrased as, ‘Why would Hillary drop out … and ditto Trump?’ I mean, we have heard this kind of banter now about both Hillary and Trump. Where is it coming from? Is it, as I suggest, merely crude orchestrated political agitprop for low information people? I don’t see how anyone of serious bent could take this talk as purport of reality. But something else, yes. And maybe even weirdly entertaining in a twisted way.

With all the political fakery going on, how to we know anything for sure? Fake polls, fake paid supporters, fake everything. I’m from Missouri and you will have to show me on voting day. Remember all the ‘Trump loser, never had a chance’ talk in the primary? Remember President Dewey? President Dewey until the morning papers came out with the real results?