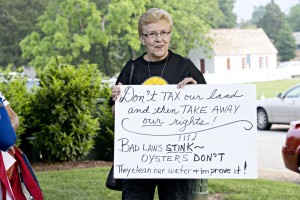 UPDATE: The York County Board of Supervisors voted 4-1 tonight to down-zone land in York Point so that these select farmers are no longer allowed to farm. In order to do this the Board had to create a brand new zoning classification.

York Supervisors voted against the recommendation of their own planning commission. It will impact 80 properties. The only dissenting vote was Supervisor Hrichak.
According to the Daily Press,

“David Phillips, a member of the York County Republican Committee, said the committee approved a resolution condemning any action that stems property rights. He said the committee “disdains the actions” by the supervisors to circumvent state farming laws.” I would expect nothing less out of this fantastic GOP Committee. Thanks to the York County Republican Committee for standing up and defending property owners.

Farmers will be seeking legal recourse, since this “spot zoning” to revoke the rights of a handful of farmers is blatantly discriminatory. Ironically, the complaining neighbor has his own oyster farm.

EARLIER TODAY: Tonight the York County Board of Supervisors is poised to revoke the property rights of a number of individuals in York County who own agriculture property by voting to down-zone their property so they can no longer use it for farming.

We have seen other localities use their brute power to harass landowners, like we saw the past few years in Fauquier County with Martha Boneta’s Liberty Farm. The General Assembly had to intervene by passing new law to stop the county from harassing Martha Boneta, but that hasn’t stopped other counties from aggressively overreaching in their communities.

I wrote extensively about this situation last month. The short story is that York County has been a farming community since the English first traveled across the Atlantic Ocean to settle here. Many landowners are zoned agriculture, but the county has been in a multi-year battle to strip them of their farming rights because of a few disgruntled neighbors. Farmers won in court in their initial lawsuit. The county appealed and won on a technicality (aquaculture versus agriculture) that created a setback for these farmers. The General Assembly passed a law last year to resolve any ambiguities by clarifying that farming is both aquaculture and agriculture.

Even though the farmers had the favor of the courts and the General Assembly, the county has refused to stop their assault on the landowners and is now poised to down-zone these farmers tonight. Keep in mind that this land has been zoned agriculture since colonial times! 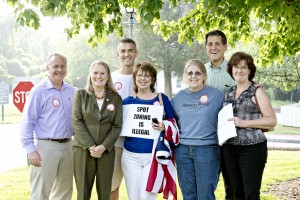 Delegate Pogge poses with some farmers and supporters.
Photos by Kelly J. Mihalcoe

Last month many turned out to protest this outrageous behavior by the Board of Supervisor during their citizen hearing meeting. Delegate Brenda Pogge was their to express her support of the landowners. Many other citizens also attended and expressed concern that their own land rights could be threatened in the future given the aggressive proclivity of the York County Board of Supervisors.

I encourage you to lend your voice to this fight if you believe property rights are a quintessential component of our freedom. Please see the below email that was sent by one of the farmers being threatened: 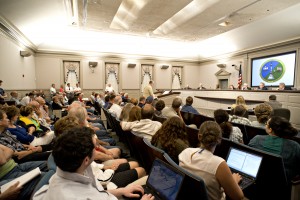 York Hall in historic Yorktown
301 Main St, Yorktown, VA
Map here: http://goo.gl/maps/xkmgR
On Tuesday June 17, the York County Board of Supervisors will vote on the first steps to strip agriculture from York County. They will vote on creating the purely residential R33 zone to replace the Rural Residential (RR) zone for the express purpose of stripping citizens ability to conduct agriculture.

They will also vote to apply this new R33 zone to the York Point area where embattled oyster farming Anthony Bavuso operates his farm.  The York County planning commission has voted unanimously to recommend denial of the York Point rezoning, but the Board of Supervisors are poised to vote to approve it in spite of the PC recommendation.

The creation of the R33 zone and the York Point rezoning will be the first dominos to fall.  County staff have identified 80 other neighborhoods that they believe should also be rezoned to R33.

This is an unprecedented land grab!  York County citizens have conducted agriculture in York County since Colonial times.

Please write an email to the York Board telling them to vote NO on R33 and NO on the the York Point rezoning.

You conservatives really struggle with this concept – the Chesapeake Bay is not anybody’s private property. I own bayfront property myself. My property ends at the waterline. I have no right to exercise dominion over a navigable waterway. It is not my property. Period. If it was my property I would charge all boats a toll to use the water I own. But I don’t own the bay in front of my house. The reason your pal can raise pigs is because pigs neither fly nor swim. They stay on his land which he does in fact own.

A landlocked Virginian from Wise County is as much an owner of the Chesapeake Bay as your friend who lives on the bay. This has also been true since colonial days.

Raising oysters on public property (say that a few times to yourself – “public property”) causes problems for other owners of that public property (i.e. all Virginians). An oyster farm inhibits boating, prevents effective crabbing and fishing, restricts water skiing, etc.

Maybe the benefits of the government permitting oyster farming on our public property outweigh the downsides. I don’t know. What I do know is that this has absolutely, positively nothing to do with private property rights.

Actually DJ, these farmers lease oyster grounds from the State. Oyster farms do not prohibit boating because the cages sit on the bottom. I personally boat each weekend in the waters in question. The properties are zoned for agriculture and aquaculture. What not being mentioned is that this was all started by a neighbor who farms oysters trying to eliminate competition. It is a property rights issue. He has befriended a crooked Board of Supervisors to change zoning that has been in place for over 200 years to fatten his own wallet. You still think it’s not an property rights issue? You should research before you post such ignorant statements.

I live on the bay and the oyster farms do disrupt recreational use of the water. Cast a bottom rig into that oyster farm and let me know what happens. Drop an anchor there. More importantly – the bay is not private property. Period. Nobody has a right to use the bay. Period. The government may lease you a right and the government may decide to stop leasing you those rights.

As I clearly stated, “Maybe the benefits of the government permitting oyster farming on our public property outweigh the downsides.”

The “farmer” in question is actually a very wealthy real estate entrepreneur who has had some “different” ideas about what he should do with his property for years – “In 2006, Garrett proposed a marine facility with a 149-foot pier, three boathouses, 11 slips, a gazebo and observation tower off his York River home.” His neighbor (the oyster farmer) opposed that plan too. Sounds to me like there is some bad blood between the two.

The guy you want to paint as a villain – McCulloch has land zoned water commercial industrial where he processes his oysters. That sounds right to me. Processing oysters is a commercial operation. It should be done on land zoned for commercial use.

In a similar case, Anthony Bavuso started processing oysters in 2010 and failed to get the required permit in 2011. Apparently, 62 of his neighbors asked the Planning Commission to restrict farming on the rural residential zoned properties. Whether that’s fair or not this is hardly a case of one guy trying to run another guy out of business. There are obviously two sides to this story.

The Virginia Supreme Court has adjudicated one lawsuit in favor of York County. Were they “on the take” too? Now the General Assembly has passed a law that prohibits a locality from demanding a permit for aquaculture. At the request of York County it won’t go into effect until Jan 1, 2015. But … is processing oysters aquaculture or a commercial operation. Raising pigs is agriculture, a Spam plant is a commercial operation. I’m guessing this will involve another trip to the Supreme Court.

You say McCullough wants to drive Garrett out of business. Maybe the “real estate entrepreneur” wants to create enough of a nuisance that McCulloch puts his house up for sale at a low price allowing McCulloch to add to his real estate empire. If you want to speculate about people’s intentions why not speculate in both directions?

This is a complex situation involving the powers of various government entities, families with long ties to York County vs newcomers, the evolution of a once agricultural community into more of a vacation / retirement community, etc.

Trying to over-simplify the matter into one of “property rights” is intellectually dishonest.

Though not having a legal education, I am finding it may be time to delve into such. I have become aware of the following link: http://www.nationallibertyalliance.org/files/juristdocs/Grand%20jury%20handbook%20Print%20ready.pdf. It seems to me that sovereign souls have recourse over an over stepping government. Quoting from their material: “The state can not diminish the rights of the people”. “The assertion of federal rights (Bill of Rights) when plainly and reasonable made, is not to be defeated under the name of local practice”. From this manual I believe that I understand, that when a municipality restricts the natural born rights of a soul that they may be in violation of one or all of the following if not more: USC 18 subsection 241- Deprivation of Rights, USC 18 subsection 242- Deprivation of Rights under color of law and USC 42 Subsection 1983- Civil action for deprivation of Rights. The citizens of these united stated, especially those in York county have been deprived of their common law rights of property, perhaps we all should start studying that which has been hidden in plain sight and reclaim what is justly ours.

Disgusting. Shame on them!

Sen. Mike Lee, UT has authored a recent bill currently moving through the legislative process that addresses these type of issues at the Federal/State level. The Federal land grabs particularly in the Western states has reached monumental proportions. Does the Commonwealth constitution provide any measure of protection to the individual? I recall their were some bills proposed in the last session but don’t recall their disputation.